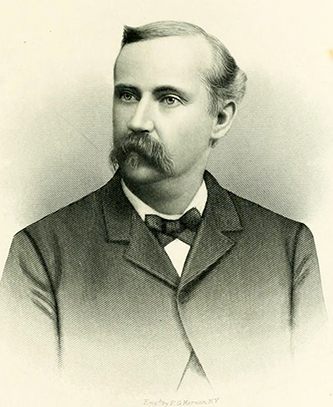 Sydenham Benoni Alexander, agriculturist and legislator, was born at Rosedale, a Mecklenburg County farm ten miles north of Charlotte. His father was Dr. Moses Winslow Alexander, first a physician and later a farmer, and his mother was Violet Graham, a sister of Governor William A. Graham. Young Syd and his eleven brothers and sisters descended from several generations of Scotch-Irish Presbyterians.

After preparatory schooling at Rocky River Academy in Cabarrus County and Wadesboro Institute in Anson County, Alexander enrolled at The University of North Carolina, being graduated in 1860. When the Civil War erupted the following April, he enlisted in the First North Carolina Regiment. In August he became drillmaster of the Twenty-eighth Regiment, and during 1862 he was chosen first lieutenant and then captain of Company K of the Forty-second Regiment. Late in the war he was detailed as inspector general on the staff of General Robert F. Hoke, but he returned to his old command before the Confederate surrender. He received special commendation for his actions in one of the engagements around Petersburg.

By 1877 Captain Alexander had gained recognition both for his accomplishments as a farmer and for his concern with broad agricultural issues. He was elected that year as master of the Grange in North Carolina and as ex officio member of the state board of agriculture. He strongly supported the newly created state department of agriculture and its energetic commissioner, L. L. Polk. The board as a whole, however, was conservative and lethargic. When the frustrated commissioner resigned, Alexander was offered the job but quickly declined it. He operated a model farm, read widely, and wrote several articles on cattle raising.

Alexander's family connections, education, war service, and personal qualities combined to make him an attractive political candidate. A Democrat, he won election to the General Assembly of 1879 as a state senator from the twenty-ninth district. In that session he forcefully advocated, and saw enacted, a road improvement law and a stock fencing law. That these laws necessitated additional taxation angered so many of his constituents that he was denied reelection. But within a few years the merits of these measures, and especially the appearance of macadamized roads in Mecklenburg County, vindicated the senator. His people gladly sent him to the legislatures of 1883, 1885, 1887, and 1901. Agriculture, finance, and education were his principal committee and floor interests. During the eighties he opposed the railroads' free pass evil and discriminatory freight rates and favored an effective state railroad commission. He added influence to the struggle to establish a land-grant institution separate from the university, and in 1887 the legislature chartered the North Carolina College of Agriculture and Mechanic Arts, located it at Raleigh, and named Alexander to the first board of trustees. He was instrumental in bringing the first president and two other faculty members to Raleigh, and he sent two of his sons to the college. Shortly after the fight for the "farmer boys' school" was won, the conscientious captain, pondering an appointment to the board of agriculture, confided in a letter to a friend: " . . . the more I think of it the more I think I ought to accept, for if any damn thing ever needed a friend, it does now." He accepted, as he did at various times the presidency of the Mecklenburg County Fair, the North Carolina State Fair, and the North Carolina Railroad.

The Farmers' Alliance, representing nationwide agrarian discontent, entered the state in 1887, and he became its first president. Alliance leaders backed him for the Democratic nomination for governor in 1888, but he lost to the candidate of the conservative business interests, Daniel G. Fowle. As a consolation prize to the farmers, the nomination for lieutenant governor was offered to Alexander, who declined it. Ironically, Fowle died in office. Alexander continued as an Alliance leader, successfully running for Congress from the Sixth District in 1890 and again in 1892. He served on the House agriculture committee in both the Fifty-second and Fifty-third Congresses. He voiced opposition to placing wool on the tariff's free list and support for issuing fractional currency for the convenience of persons who lived from 3 to 25 miles from a post office. His longest speech, delivered 21 Aug. 1893, was applauded as an analysis of "the present panic" and a statement of the "necessity for immediate relief" through "more currency in circulation as proposed by the Sherman [Silver Purchase] Act." Notably, he introduced the measure to "extend to Alaska the benefit of . . . instruction in agriculture and the mechanic arts." Republican-Populist fusion dominated the state between 1894 and 1900. In the Democratic return to power, Alexander, then of the twenty-fifth district, regained his congressional seat and joined his colleagues in 1901 to appropriate $200,000 for the public schools.

Enderly, Alexander's rural Mecklenburg estate immediately west of Charlotte, had long been his home and refuge, but in 1906 he moved into the city. After that point, except for leadership in the 1909 campaign of the American Cotton Association "to put in the hands of the farmer the control of his crop," he lived mostly in retirement. He was a genial, solid man in health, but during his last six years, he was an invalid.

Alexander married Emma Pauline Nicholson, of Halifax County, on 20 June 1872. They became the parents of three sons (Sydenham Brevard, a merchant; Thomas Willis, a lawyer, and Emory Graham, a surgeon) and three daughters (Pattie Thorne; Violet Graham; and Julia McGehee, the second licensed woman attorney in North Carolina). Emma died in 1880, and on 16 Sept 1885, in Louisburg, he married Louise Perry of Franklin County. They had no children; she died in 1890.