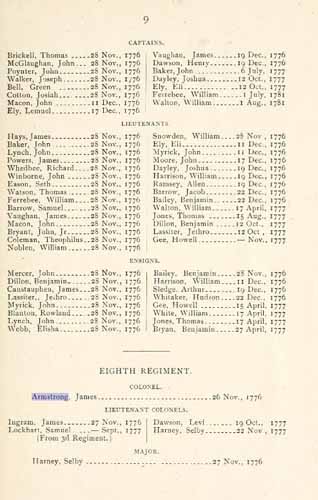 James Armstrong, revolutionary officer, was a resident of Pitt County during the Revolution and until his death. Little is known of his ancestry or his family, but he was apparently a well-to-do planter and leader in his community. He was elected a major in the Pitt County militia in September 1775. On 30 Nov. 1776 he was appointed colonel of the Eighth Regiment of North Carolina Continental troops. He was also a member of the Pitt County Committee of Safety in 1776. In September 1777 he led his troops in the Battle of Brandywine, near Philadelphia, and his regiment suffered such casualties that it was dissolved and its remnants combined with the Second North Carolina Continentals. Following this battle, Armstrong presided over a court of inquiry into the conduct of another North Carolina officer, Colonel Gideon Lamb, in which the latter was acquitted. On 1 June 1778, Armstrong resigned from the Continental forces; he later became a colonel in the North Carolina militia. In this capacity he took part in the Battle of Stono Ferry, S.C., 20 June 1779, where he was wounded. In 1780 he was in charge of recruiting for the North Carolina forces in the eastern part of the state and on 6 Feb. 1781 was made brigadier general of the militia in the New Bern area. Shortly afterward, he retired at half pay; he later received for his military services a grant of 7,200 acres of land in Tennessee.

In 1782, Armstrong became Commissioner of Confiscated Property for the District of New Bern and in 1784 a member of the North Carolina Governor's Council of State. From 1788 to 1790 he served in the state legislature. In November 1789 he represented Pitt County at the convention in Fayetteville, when North Carolina ratified the Constitution of the United States.

James Armstrong died late in 1794, and his descendants subsequently left the area. According to the census of 1790, he owned ten slaves at that time and may have had as many as four sons and two daughters.

Davis, Charles Lukens. A brief history of the North Carolina troops on the Continental establishment : in the War of the Revolution : with a register of officers of the same. Philadelphia, Pa. : [s.n.]. 1896. https://archive.org/details/briefhistoryofno00davi (accessed January 18, 2013).

North Carolina. Secretary of State. North Carolina troops in the continental line : a register of officers, with dates of commissions, made up under the direction of the Secretary of State from records in his office, October, 1884. [Raleigh, N.C. : s.n.]. 1884. https://archive.org/details/northcarolinatro1884nort (accessed January 18, 2013).