Agnew Hunter Bahnson, textile manufacturer, was born in Salem, the son of Dr. Henry Theodore and Emma Fries Bahnson. His grandfather, George Frederic Bahnson, moved to Salem in 1849 from Lancaster, Pa., to become minister of the Home Moravian Church. Bahnson was educated at Salem Boys' School and at The University of North Carolina, from which he was graduated in 1906. He spent the next fourteen months traveling in Europe and Egypt and, when he returned, began work in his family's textile mills. He was employed first as an apprentice in the Mayo Mills in Mayodan and afterward as a loom fixer in the Loray Mills in Gastonia. In 1909 he became superintendent of the Pomona Mills in Greensboro and in 1911 agent for the Washington Mills Company in Fries, Va. He became secretary and treasurer of the Arista Mills in 1912 and after three years became president, succeeding his uncle, John W. Fries. In 1921 he became secretary and treasurer of the Washington Mills, and in 1923, he developed the Mayo Sales Corporation. In the same year he became president of the Washington Mills, with which the Mayo Mills had recently consolidated.

Bahnson and his brother, Frederic Fries Bahnson, formed the Normalair Company in 1915, to manufacture 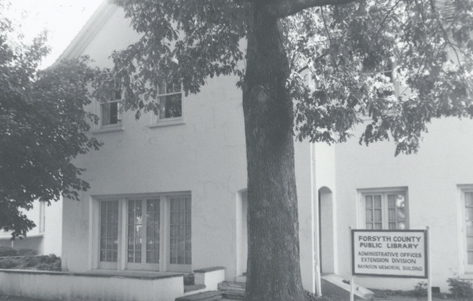 humidifiers for textile mills. The name was changed to the Bahnson Company in 1929, and in 1940 Agnew acquired Frederic's interest in the firm. In 1947, Agnew Hunter Bahnson, Jr., succeeded as president of the company. At the time of his death, the elder Bahnson was chairman of the boards of Washington Mills, the Bahnson Company, Arista Mills Company, and the Mayo Sales Corporation.

Bahnson was a Moravian and made substantial contributions to the Moravian church and to Salem College. In 1941 the Moravian College in Bethlehem, Pa., awarded him an honorary LL.D. degree.

Bahnson was married to Elizabeth Moir Hill on 18 Nov. 1914, and they were the parents of Agnew Hunter, Jr., and Elizabeth Hill. He was buried in the Salem Moravian Cemetery.

An unidentified man is photographed with a large dog propped up on a table. They seem to be standing on a porch. The photograph is stamped on the back, “TAKEN BY / A. H. Bahnson, / Salem, N. C.” Also on the back is handwritten, “2 unmounted.” Agnew Hunter Bahnson, Sr., was born in 1886 and died in 1966. Digital Forsyth: http://www.digitalforsyth.org/photos/10371

Technical Services Department of the library, located in the Agnew H. Bahnson house at the corner of West Fifth and North Spring Streets. Digital Forsyth: http://www.digitalforsyth.org/photos/1203