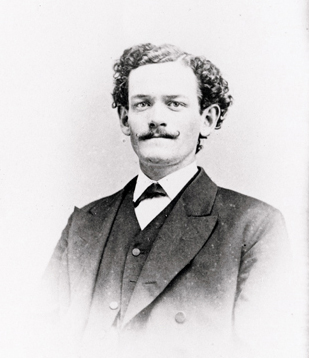 Henry Theodore Bahnson, surgeon and cattle breeder, was born in Lancaster, Pa., where his father, George Frederick Bahnson, was the minister of the Moravian church. In 1849 the senior Bahnson moved his family to Salem, where he had been called to the pastorate of the Home Moravian Church. He later became the bishop for the southern province of the Unitas Fratrum (Moravian denomination). Henry Bahnson's mother was Anna Gertrude Pauline Conrad. Young Henry began his education at Salem Boys' School, transferred in 1858 to Nazareth Hall, the Moravian boarding school in Nazareth, Pa., and then entered Moravian College and Theological Seminary in Bethlehem, Pa.

His schooling was interrupted in 1862, when he enlisted in the Confederate Army as a private in Company G, Second North Carolina Infantry Battalion. He was captured at the Battle of Gettysburg and held in prison in Baltimore City jail and then at Point Lookout, Md., for six months. In January 1864 he was exchanged and transferred to Company B, First North Carolina Battalion of Sharpshooters, where he gained a reputation in keeping with the designation of the group. He was with General Robert E. Lee's troops at Appomattox and had been promoted to the rank of captain, but the surrender came before his commission could be delivered. In later life, Bahnson enjoyed referring to himself as "the only surviving private in the Civil War." He walked home from Appomattox, living on roots and berries, and was in such bad condition when he finally got home that his mother did not recognize him. For the rest of his life he could not bear to see any food left on a plate or wasted in any way. He hated all he had seen during his three years of war service and could scarcely ever be persuaded to talk about his experiences. When he did discuss the war, it was with great sympathy for all who had suffered on both sides of the conflict.

After a short rest at home, Bahnson went to Philadelphia to study medicine at the University of Pennsylvania. Thus began a lifelong friendship with the famous surgeon Dr. D. Hayes Agnew, his teacher, whom he revered so much that he named one of his sons for him. After graduation in Practical and Surgical Anatomy in 1867, Bahnson went to Europe to continue his studies at the universities of Berlin, Prague, and Utrecht. Returning home, he secured his license in May 1869 and began his long practice of medicine, treating patients in Salem and even journeying into Virginia when he was needed. His fame as a surgeon and especially as a diagnostician was widespread, but equally renowned were his kindness and thoughtfulness and his way with people, according to many anecdotes told by his grateful patients. 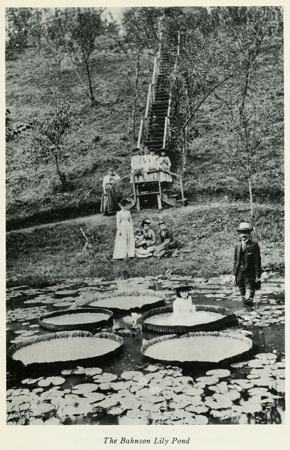 Soon after he began his practice, Bahnson bought the house where he and his second wife would rear their children, just two doors north of the Home Moravian Church in Salem. The previous owner, also a physician, was known for a flower garden made of terraces on the steep hillside that fell from the back of the house down to a little creek. Dr. and Mrs. Bahnson further developed this garden, and Bahnson dammed up the creek to make a pond, where he grew not only water lilies of his own hybridizing but also Egyptian lotus and, for the first time ever in the United States outside a greenhouse, the Victoria Regia water lily. In Old Salem North Carolina, facing page 130, there is a picture of a young girl sitting in the center of one of these large, rimmed lily pads, while Dr. Bahnson, in waders, stands nearby in the pond.

Another hobby of Bahnson's was his farm, for which in 1882 he bought the first Guernsey cattle owned in North Carolina. The first Guernsey registered by the American Guernsey Cattle Club from the State of North Carolina was born on Bahnson's farm on 6 May 1884. One of Bahnson's bulls, Squire of Salem 1451, was dropped 18 Nov. 1886; through two cows sired by this bull, the strain was transmitted to every part of the United States. Bahnson helped five of the earliest Guernsey breeders in the state establish their herds by selling them some of his stock.

Physician, botanist, and cattle breeder, Bahnson still found time to devote to his church. During the Civil War he had read the New Testament through in Greek; while he was a medical student, he was confirmed on 29 July 1866, in the First Moravian Church in Philadelphia. He moved his membership to the Home Moravian Church in Salem and served his church well as a member of various committees and boards, including the Board of Trustees of Moravian College and Seminary, Bethlehem, Pa. For many years he was the college physician for Salem Academy and College, and the Bahnson infirmary (1925) was named in his honor.

Bahnson was married twice: on 3 Nov. 1870 to Adelaide de Schweinitz, who died 3 Aug. 1871, and then to Emma Caroline Fries on 14 Apr. 1874. To this second union were born six children: Henry T., Jr., and Carrie, who died early; Frederick Fries, Agnew Hunter, Mary Louise, and Pauline Conrad. Mrs. James A. Gray, Sr., (Pauline Bahnson) left a portrait of her father to her children.