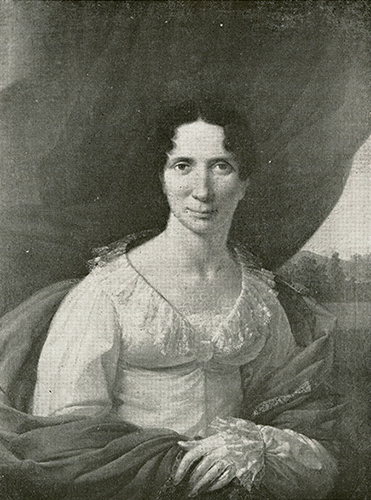 Mary Blount, daughter and wife of revolutionary generals, by whose benefaction Christ Episcopal Church, Raleigh, was built, was born in Warren County at the home of her father, General Jethro Sumner. Her mother, before her marriage to General Sumner, had been the widow Heiss of New Bern. The Sumners were of English blood, Sumner's father, William, having emigrated from England about 1690 to settle near Suffolk, Va. General and Mrs. Sumner had a son, Thomas Edward, who, like his sister, died without leaving a family.

In November 1796, Mary Sumner became the second wife of General Thomas Blount of Edgecombe County. Their large plantation adjoined the town of Tarboro, and their handsome house is still standing. Blount was North Carolina's representative in Congress at the time of their marriage and for sixteen years thereafter, until his death in office in Washington, where he was buried in the Congressional Cemetery.

Mrs. Blount's substantial fortune was distributed at her death to many relatives and friends. The most interesting bequest in her long and detailed will has as its object the "Building of a Protestant Episcopal Church in the City of Raleigh." The means was to be "a large sum of money now due to me by virtue of the will of my late husband," estimated to have been between ten and fifteen thousand dollars. Duncan Cameron, Esq., of Orange County and the Reverand William Hooper, "now of Fayetteville," were named agents to collect the money and carry out the intent of the will. "And whereas doubts have been entertained whether a bequest of this nature cannot be defeated by the interference of those on whom the law would cast the Estate in case of an intestacy, I do further will that the said Duncan Cameron and William Hooper . . . shall have the said legacy, stripped of any trust which can result to the benefit of my next of kin, and unfettered by any trust which can be enforced by any earthly tribunal: leaving the disposition of the said legacy to their consciences." Happily, the executors secured the money for the stated purpose, and in 1826 the present church lot was purchased and a frame building erected, the predecessor to the present handsome building.

Mrs. Blount was buried in Calvary churchyard, Tarboro. A bolt of lightning, tradition says, destroyed her tombstone. It was replaced by a handsome stone, the gift of the congregation of Christ Church, Raleigh.

Mrs. Blount's portrait, painted in Washington, D.C., in 1820 by the Italian artist Pietro Bonanni, was bequeathed by her to her long-time friend, Moses Mordecai of Raleigh. It now hangs in the Mordecai House, a museum property of the city of Raleigh. The granddaughter of Moses Mordecai intended to give the portrait to Christ Church, and so stated in her will, but later revoked her intention.

Mrs. Blount died suddenly in Tarboro at the home of a friend.

Joseph Blount Cheshire, Jr., "Life of My Father" (MS, in the possession of J. B. Cheshire IV, of Raleigh)