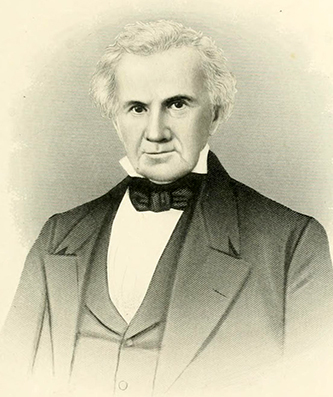 Duncan Cameron, planter, judge, politician, and banker, was born in Mecklenburg County, Va. His father, the Reverend John Cameron (d. 1815), an Episcopal priest, was the son of Duncan and Margaret Bain Cameron of Ferintosh in the Highlands of Scotland and was descended from members of Clan Cameron of Lochiel. John Cameron, who received his M.A. from King's College, Aberdeen, in 1767, came with three of his brothers to Virginia in 1770. One of the brothers, Donald, later returned to Scotland; another, William, remained in Virginia; and the third, Ewen, married Frances Buford of Virginia in 1797 and later settled at Franklin, Tenn. In 1773, John Cameron married Anne Owen Nash (15 June 1755–25 Aug. 1825), daughter of Thomas and Mary Read Nash and niece of Governor Abner Nash of North Carolina and General Francis Nash. The Camerons' seven children were Mary Read, who married Daniel Anderson; Duncan; Jean, who married the Reverend Andrew Syme; John Adams, who married Eliza Adam and then a widow, Mrs. Catherine McQueen Halliday, settled in Fayetteville, and was drowned in the wreck of the ship Pulaski; Anne, who died young; William, who practiced law at Hillsborough, married Anna Call (daughter of Chief Justice John Marshall's brother-in-law Daniel Call), and was the grandfather of William Evelyn Cameron, governor of Virginia (1882–86); and Thomas, a physician of Fayetteville, who married Jane Wilder and later Isabella Wilkins. The Reverend John Cameron had numerous grandchildren; a great-grandson, Bennehan Cameron, provided a bronze tablet to commemorate him at Old Blandford Church, Petersburg.

Duncan Cameron studied law under Paul Carrington of Charlotte County, Va., and was admitted to the bar in North Carolina in 1798. A few years later he himself taught Willie P. Mangum. After practicing law briefly at Martinsville, then the seat of Guilford County, he established himself as a highly successful attorney at Hillsborough. A rivalry sprang up between him and another brilliant young Hillsborough lawyer, William Duffy, growing partly out of legal affairs and partly from the desire of both young men to win the hand of Rebecca Bennehan (28 Nov. 1778–6 Nov. 1843), only daughter of Richard Bennehan. Cameron succeeded with the young lady, whom he married at Stagville on 24 Feb. 1803. On 17 Apr. of the same year he fought a duel with Duffy at a place just above the Virginia line; Cameron received a minor wound in the left shoulder and Duffy was badly crippled by a bullet in the right hip. Duffy left Hillsborough but continued to practice law in Fayetteville.

Cameron became a trustee of The University of North Carolina in 1802, was judge of the superior court from 1814 to 1816, and at various times served as president of the State Bank of North Carolina, clerk of the North Carolina Supreme Court, and member of the board of internal improvements. Between 1802 and 1824 he served five terms in the house and three in the senate of the state. He was chairman of the committee to build the present state capitol of North Carolina and was a founder of Christ Episcopal Church in Raleigh and chairman of its building committee. When the old Episcopal School for Boys ceased to operate in 1833, he bought the property and established there St. Mary's School for Girls.

Cameron became one of the largest plantation owners and slaveholders in the South. A year after his marriage he built a mansion house, called Fairntosh, on an elevated site about a mile east of the Stagville house. Around this house he built many dependencies, including his law office, with nearby barns and other utility structures. He also built a chapel in a grove of trees about a quarter of a mile east of the new home and laid off the plot for the family cemetery nearby. By 1850 he owned many thousand acres of land—reported by some of his contemporaries as the largest plantation east of the Mississippi River—and over a thousand slaves. He established a way of life and an economy as well balanced and complete as that of a medieval lord. His correspondence and that of other members of his family, preserved in the Cameron Papers at The University of North Carolina, speaks frequently and characteristically of both the "white family" and the "black family" on the plantation, and the same doctors and preachers took care of the needs of both. There was never any question that economic needs would be met. In 1834, Cameron was elected president of the state's Colonization Society; the society offered some slaves their freedom and paid for their voyage to Liberia, from which some voluntarily returned to slavery. Promising Fairntosh slaves were given an education.

In about 1835, Cameron built a spacious home on ten acres of land directly across Hillsborough Street from St. Mary's School, and henceforth he and his family divided their time between this home and Fairntosh.

Duncan and Rebecca Cameron had two sons and six daughters. The older son died unmarried. Four of the daughters, Jean Syme, Mary Ann, Rebecca, and Anne Owen—all in the bloom of youth and all unmarried—died between 1837 and 1840. A fifth, Mildred, lived to old age but never married. The sixth, Margaret, married George W. Mordecai, who succeeded Cameron as president of the State Bank of North Carolina; but the Mordecais had no children. When Cameron died in 1853, practically the whole estate was handed down to the second son, Paul Carrington. Cameron, his wife, and most of his children were buried in the cemetery at Fairntosh. Many of the family letters reflect vividly the life of genteel people in North Carolina and Virginia in the late eighteenth century and throughout a great part of the nineteenth. One of Cameron's descendants, Mrs. John W. Labouisse, owns a handsome portrait of him.

Samuel A. Ashe, ed., Biographical History of North Carolina, vol. 3 (1905), and Cyclopedia of Eminent and Representative Men of the Carolinas of the Nineteenth Century, vol. 2 (1892).