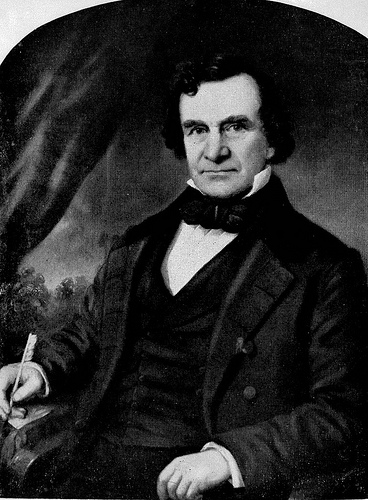 George Washington Mordecai, attorney, planter, financier, entrepreneur, and railroad and banking executive, was born in Warrenton. His father, Jacob Mordecai (1762–1838), had come to North Carolina as a merchant by way of Philadelphia, New York, and several Virginia locations. His mother, Rebecca Myers Mordecai (1776–1863), was Jacob's second wife and a half sister of his first wife, Judith Myers Mordecai (1762–96). Children of the first marriage included Raleigh attorney Moses; Samuel, merchant of Petersburg and Richmond, Va., and author of Richmond in By-Gone Days ; Solomon, physician of Mobile, Ala.; Rachel (Mrs. Aaron Lazarus); Ellen, author; and Caroline (Mrs. Achille Plunkett). The last-named four assisted their parents in operating the Mordecai Female Seminary, a prestigious boarding school conducted at their Warrenton home from 1809 to 1818. There, George received a classical education and later briefly taught. His younger brothers and sisters, who also were educated by their family, included Alfred, career army officer and engineer; Augustus, merchant and agriculturist of Raleigh and Richmond; and Julia, Eliza Sarah Kennon (Mrs. Samuel Hays Myers), Emma, and Laura.

In 1818 George Mordecai moved to the Raleigh home of his brother Moses, under whom he studied law. He completed his studies at age nineteen but had to wait until he reached the required age of twenty-one to receive his law license. In the interim he went by horseback to Louisville, Ky., to oversee the family's investments in the tobacco business. Admitted to the bar on 18 June 1822, he practiced in county and superior courts in Wake and other eastern counties until the 1840s, when his health and growing business and philanthropic pursuits caused him to give up circuit riding. Young bar candidates read law with him in preparation for their own practices.

On the death of Moses on 1 Sept. 1824, George became the guardian of his half brother's four children from two marriages. As adviser to the widow Anne Willis (Nancy) Lane Mordecai, he supervised the extensive Lane-Mordecai plantations while continuing his own law practice and that of Moses. He later became the guardian of Samuel Fox Mordecai II, his great-nephew, after the death of Samuel's father in 1853.

Mordecai was a leader in railroad pioneering in North Carolina. He was a subscriber to and an incorporator of the Experimental Rail Road (1832–40) that hauled granite from a local quarry to Union Square for building the 1840 state capitol. He was an incorporator and first president (1836–40) of the Raleigh and Gaston Railroad (later Seaboard) and traveled to England on business for the company during the winter of 1838–39. After the state acquired the road, he was again an incorporator and served a second term as president in 1851–52 under the reorganization, remaining a director for the rest of his life. When the North Carolina Railroad was chartered in 1849, he was appointed a commissioner to create its capital stock and was himself the largest subscriber in the railroad, completed in 1856. He had aided in attempts to build a Raleigh and Columbia (S.C.) Railroad in the 1840s. At the outbreak of the Civil War, he was one of the commissioners who solicited subscriptions for the Chatham Railroad (later Raleigh and Augusta), which was designed to link Raleigh with the Chatham coal fields. A frequent delegate to internal improvements conventions in his own and adjoining states (1849–50 and 1856–57), he also solicited subscriptions for the Fayetteville and Northern Plank Road in 1851.

During the closing decades of the antebellum period, Mordecai was involved in the banking interests of the state. In 1849 he was elected president of the Bank of the State of North Carolina, succeeding his future father-in-law, Duncan Cameron, and in 1859 he also became president of the Bank of North Carolina. Marshall De Lancey Haywood noted that shortly before the surrender of the Confederacy in 1865, Mordecai converted into gold some $500,000 of the bank deposits, which he secreted from possible confiscation by Union forces and later prorated among the depositors to whom the funds belonged.

In 1833 he had established with his brother Augustus and James McKimmon the dry goods business of Mordecai and McKimmon. After 1838 the firm continued under McKimmon's name in a large brick commercial building constructed by Mordecai and Gavin Hogg in 1835 on the site of the burned Casso's Inn in Raleigh. He also served as vice-president of the North Carolina Mutual Insurance Company, chartered in 1849; as organizing chairman in 1858 and longtime director of the Raleigh Gas [Light] Company; and as president of the North Carolina branch of the DeSoto Insurance Company from its organization in 1869 until his death.

Not until after the death of his respected orthodox father in 1838 did Mordecai take the formal steps to convert from the Hebrew faith of his family to Christianity. He was baptized the following year in Raleigh's Christ Episcopal Church and for the rest of his life participated in its affairs. A memorial window in the sanctuary commemorates his contributions to church and community. One of his first church-related activities was aiding in the establishment of St. Mary's School in the buildings of the former Episcopal school for boys. He served Christ Church as vestryman, senior warden, and member of the building committee for the new (present) stone structure consecrated in 1854.

As coexecutor of the will of John Rex in 1839, Mordecai handled details of the estate settlement, which resulted many years later in the establishment of Rex Hospital in Raleigh. Governor Charles Manly appointed him to the board of commissioners for building Dorothea Dix Hospital for the insane; Mordecai served as secretary of the board from 1848 until 1856, when the hospital opened.

In 1861 he was a candidate for delegate to the Secession Convention but lost the election by six votes, along with former governors Manly and Thomas Bragg. During the Civil War Mordecai assisted in purchasing provisions for the Confederacy and was treasurer of the Wayside Hospital Association. His pardon is dated 12 Aug. 1865.

After the war Mordecai assisted the Raleigh Memorial Association in establishing the Confederate Cemetery, and in 1869 he was an incorporator and first president of Oakwood Cemetery. The adjacent cemeteries occupy land made available by his nephew, Henry Mordecai.

On 1 June 1853 he married Margaret Bennehan Cameron (20 Mar. 1810–12 Mar. 1886), the daughter of Rebecca Bennehan and Judge Duncan Cameron of Raleigh and Orange County. After their marriage, the Mordecais lived in the Camerons' Raleigh home on Hillsborough Street, where they both died. The couple's only child, a daughter born in 1855, died in infancy. Mrs. Mordecai, a lifelong member of Christ Church, survived her husband by fifteen years. All three were buried in the Mordecai section of Oakwood Cemetery, to which other family graves had been moved from a private burial site near the Moses Mordecai home at 1 Mimosa Street. Mordecai House, as it became known, was acquired by the city of Raleigh in 1967; with assistance from numerous organizations and individual volunteers, it was opened to the public in 1972 as a historic site and center of Mordecai Historic Park.

Gratz Mordecai, "Notice of Jacob Mordecai, Founder and Proprietor from 1809 to 1818 of the Warrenton (N.C.) Female Seminary," Publications of the Jewish Historical Society, no. 6 (1897).