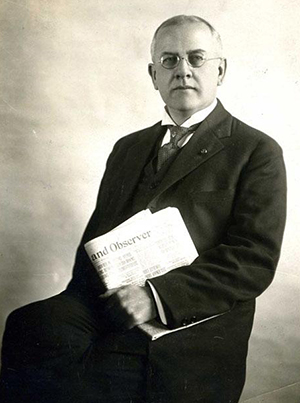 Marshall De Lancey Haywood, historian and author, was born in Raleigh, the son of Richard Bennehan and Julia Ogden Hicks Haywood. His father was a distinguished physician and his grandfather, Sherwood Haywood, with his three brothers, was among the first settlers of Raleigh. He was educated at the Raleigh Graded School, Raleigh Male Academy, and Johns Hopkins University. Before assuming duties as marshal and librarian of the North Carolina Supreme Court, a position he held for fifteen years (1918–33), Haywood worked briefly in the office of a cotton broker, as secretary to the North Carolina attorney general, as local editor of the Raleigh Daily Times, as assistant state librarian, as librarian of the North Carolina College of Agriculture and Mechanic Arts (now North Carolina State University), and for a year as assistant librarian of the Supreme Court.

An avid interest in history and membership in one of the most prominent families in the state prompted Haywood in 1893 to found the North Carolina Society of the Sons of the American Revolution. As its secretary and in other offices, he led the organization to a position of importance in the state. He was also instrumental in the revival of the North Carolina Society of the Cincinnati, which, although organized in 1783 by the officers of the Continental Army, had been inactive since the Civil War. Haywood, who became an honorary member before his election as a hereditary member, served the society for more than thirty years as assistant secretary (1897–1908) and secretary (1908–33). His interest, however, was not confined to the Revolutionary period, for he was also active in the United Sons of Confederate Veterans.

Martha Hawkins Bailey of Florida became his wife on 16 Oct. 1926, and they were the parents of one child, Marshall De Lancey Haywood, Jr. A lifelong resident of Raleigh and an Episcopalian, Haywood was a member of Christ Church. He was buried in Oakwood Cemetery.