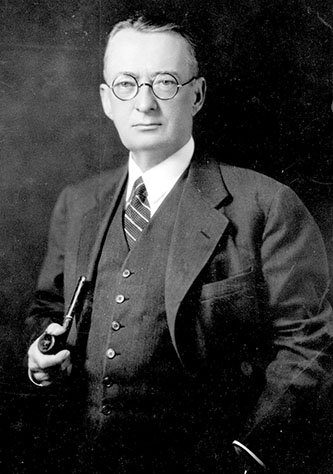 William Kenneth Boyd, historian, was born at Curryville, Mo., the second son and the youngest of six children of the Reverend Harvey Marshall and Mary Elizabeth Black Boyd. His father, a native of Kentucky, was of Scottish descent; his mother came from a Virginia family with English ancestry. The Boyd family soon moved to Weaverville, where Harvey Boyd was a Presbyterian minister. William attended Weaver College and then in 1895 entered Trinity College, recently removed to Durham from Randolph County, as a junior. At Trinity his chief interests were history and English literature; he took an A.B. degree in 1897 and an M.A. in 1898. In the latter year he served as an assistant to John Spencer Bassett, who became an important influence on his career. For two years, Boyd was a master in history in Trinity Park School (a preparatory school for the college); after two more years as adjunct professor of history at Trinity, he entered Columbia University, where he received the Ph.D. degree in 1906. He interrupted his studies at Columbia to serve on the staff of the Encyclopedia Britannica in 1904–5 and as an instructor in history at Dartmouth College in 1905–6. In September 1906 he returned to Trinity College as professor of history, and there, except for brief intervals, he remained. During a period as visiting scholar at the University of Pennsylvania in 1921 he discovered in the Library of the American Philosophical Society the secret history, previously unused and practically unknown, of William Byrd; later he edited it as Byrd's Histories of the Dividing Line betwixt Virginia and North Carolina (1929).

Boyd went to Trinity just as his mentor, Bassett, was leaving after a famous controversy known as the "Bassett Affair." Like Bassett, Boyd was a trenchant critic of an antiquated society intent on using history to support a patriotic bias, but his methods were not controversial. Although he was personally rather shy and reticent, with no gift of small talk, his enthusiasm for good causes soon made him a leader on academic committees. For two summers he directed the summer school; when the Student Army Training Corps was approved for Trinity in 1918, he was chosen to direct its academic program. For ten years (1919–29) he was coeditor of the South Atlantic Quarterly, a literary and historical journal founded at Trinity in 1902. He contributed numerous essays to the Historical Papers of the Trinity College Historical Society and wrote articles for The South in the Building of the Nation and for the Cambridge History of American Literature. With Smith Burnham, he wrote A History of the United States for Schools (1921); with Robert P. Brooks, A Selected Bibliography and Syllabus of the History of the South, 1584–1876 (1918); and with J. G. deRoulhac Hamilton, A Syllabus of North Carolina History, 1584–1876 (1913). He edited several volumes of source materials, of which the most important was Some Eighteenth Century Tracts Concerning North Carolina (1927). While he was president of the North Carolina State Literary and Historical Association (1921–22), the North Carolina Historical Review was planned. In 1935 he became a member of the North Carolina Historical Commission.

It was as a teacher, writer, and builder of the library that Boyd was primarily known. At Columbia his doctoral dissertation dealt with the Theodosian Code ("Ecclesiastical Edicts of the Theodosian Code," 1905), but at Trinity there was no opportunity for research in medieval history; Boyd, like Bassett before him, turned to local materials that both he and his students might find and use. He believed that local and regional studies were the best preparation for understanding the character and results of national policies; and he thought that for a society to begin to understand itself, it must go beyond the narrowly political and examine the social, economic, and institutional matrix. He stressed, for example, the historical study of organized religion. In 1919 he contributed a volume, The Federal Period, 1783–1860, to a three-volume history of North Carolina. It was notable for its emphasis on the broader aspects of history and was characterized by R. D. W. Connor as the "first adequate interpretation of the history of the period." Boyd had a stimulating effect upon his students: he urged them to collect local materials and to publish articles in the college publications; he was fertile with suggestions; and he had the knack of opening students' minds with unassuming but relevant questions. He was a prober and a thinker, by nature practical and direct rather than doctrinaire. The Story of Durham, City of the New South (1925), in which he was assisted by some of his students, revealed the new economic life and new social forces of a city of the modern South, and proved more prophetic than the Agrarian crusaders then beginning to be heard.

As Trinity became Duke, Boyd remained chairman of a growing department; he directed most of the dissertations in American history and increased his collecting activities. Through the generosity of the children of George Washington Flowers, and especially of W. W. Flowers (a Trinity graduate, a friend of the Dukes, and an official of the Liggett and Myers Tobacco Company), Boyd was able in the late twenties to devote time and money to the acquisition of southern Americana for the Duke University Library. His success was notable, and the Flowers Collection became a significant research source for Duke students, teachers, and visiting scholars. In 1930, Boyd became director of libraries at Duke; he relinquished that position in 1934 but continued to teach, direct graduate students, and manage the Flowers Collection. He probably did more than any other individual to turn Duke's small college library into a university research library.

Boyd's first wife was Pat LeGrand of Rockingham. They were married 22 Dec. 1908; she died 10 Sept. 1924, leaving one daughter, Mary Elizabeth. Boyd was married again, on 11 Aug. 1931, to Marion Colley. She was a former journalist and was said to have been the first woman delegate to the Democratic National Convention. After Boyd's death she returned to her native Washington, Ga., where she died in 1973 at the age of ninety-eight. Boyd's only child, Mary Elizabeth, was married on 27 May 1938 to William B. Hamilton (d. 17 July 1972), professor of history at Duke University; she died 5 Mar. 1954, leaving one child, Elizabeth Cavett (b. 5 Feb. 1940). Boyd was a member of the American Historical Association and other professional organizations; the Methodist Episcopal Church, South; and Phi Beta Kappa. He was buried in the Maplewood Cemetery in Durham.