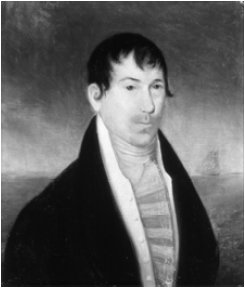 Otway Burns, Jr., privateer, ship builder, and legislator, was born on Queen's Creek, Onslow County, about two miles from the present town of Swansboro. Of Scottish descent, he was the son of Otway Burns, Sr., and his wife, Lisanah. His paternal grandfather was Francis Burns, Sr., who emigrated from Glasgow, Scotland, in 1734 and died on Queen's Creek toward the end of 1791. Francis, Sr., had lived on the Northeast Branch of New River at the time of his marriage to Mary Otway in 1744. By her he became the father of Otway, Sr., and at some later time he moved to Queen's Creek. His second wife was named Elizabeth, and she survived him by about five years. Otway, Sr., appears to have died intestate prior to July 1797, when a new overseer of the roads in the Queen's Creek area was appointed "in the room of Otway Burns, deceased." He evidently left his widow and six orphans: sons Francis II and Otway, Jr., and daughters Susannah, Mary, Elizabeth, and Experience. Otway Burns, Jr., appears to have had little formal education and to have taken to the sea quite early. His skill as a mariner soon became established, and in 1806 the Onslow County Court bound an orphan lad to him to learn navigation. In 1808, Burns deeded to his brother, Francis, all his interest in the land willed to the two of them by their grandfather, Francis, Sr.; in slightly less than ten years from that time, Francis II died.

Prior to the War of 1812, Burns had been a sailing master; immediately before the war he was in command of a merchantman plying between New Bern and Portland, Me. When the war broke out, Burns and others became interested in privateering. He purchased in New York the schooner Zephyr, built in 1808 on West River, Md., and shares were sold in New Bern and Tarboro to outfit the vessel. Among the chief stockholders were Colonel Edward Pasteur and William Shepard of New Bern. Armed with six guns and manned by a crew of eighty, the vessel, renamed the Snap Dragon, made three highly successful cruises, two to the West Indies and one to Nova Scotia, and was captured on a fourth voyage near Nova Scotia. Newspapers and court records are filled with reports of prizes to the Snap Dragon arriving in Beaufort or New Bern. Burns commanded during the three successful cruises. So many legends have been handed down concerning his prowess both in handling men and in handling ships that it is difficult to separate truth from fiction. 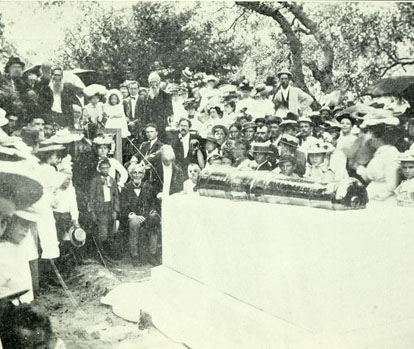 On the first cruise, a six months' voyage to the Spanish Main in 1812–13, the Snap Dragon captured eight vessels: three of these were unloaded and then burned; three were filled with prisoners to be released; one fine copper-bottomed sloop was turned into a tender and storehouse; and one prize, the Fillis, was sent to New Bern laden with three thousand goat skins, hides, mats, and yams. Eighteen enslaved men were taken from another of the vessels. Following this voyage, the Snap Dragon returned to Beaufort for a brief rest and then on 3 June 1813 headed for Nova Scotia and Newfoundland to intercept British ships en route to Canada. This was the most rewarding voyage of all, since Burns captured some half million dollars' worth of cargo, besides one prize that was retaken by the British. Upon her return, the Snap Dragon was so loaded that the crew was sleeping on deck. Auctioned at William Shepard's warehouse after wide advertising, the goods were sold for more than four hundred thousand dollars in addition to the price brought for a brig. Each crew member received three thousand dollars and the investors divided the remainder. A third voyage in early 1814, again to the Spanish Main, resulted in only one known capture and an inconclusive battle with an eighteen-gun British privateer. When the Snap Dragon left on 26 May 1814 for her final cruise, under the command of Captain W. R. Graham, Burns remained home, reportedly because incapacitated with rheumatism. The Snap Dragon met her fate 30 June 1814, when she was captured by the British sloop of war Martin (not, as legend has it, by the fifty-four-gun frigate Leopard, disguised as a merchantman). An original watercolor painting depicting the capture of the Snap Dragon by the Martin is in the files of the Mariners' Museum, Newport News, Va.

Having entered the War of 1812 as a mariner and shipbuilder with connections in Swansboro, Beaufort, and New Bern, Burns emerged from the war as North Carolina's greatest privateer hero. After the war's close, he returned to shipbuilding. In 1818 he built the steamer Prometheus at Swansboro. The first steamboat built in the state, the Prometheus operated on the Cape Fear River. Other vessels built by him in Carteret County include the Warrior in 1823 and the brig Henry in 1831.

In addition to shipbuilding, Burns engaged in a variety of other ventures. In 1820 he bought a ten-acre tract on Taylor's Creek near Beaufort, where he and Asa King (co-owner) erected a salt works in which Burns retained an interest until at least 1826 (when it was mortgaged) and possibly later. As early as 1819, and as late as 1829, there are mentions of a store that Burns owned on leased ground adjoining his home on Front Street, Beaufort. His mortgage deeds indicate the possession of farm lands, equipment, and livestock; the rights to enslaved a number of people; and nets and an assortment of boats (schooners, flats, seine boats, sailboats, and canoes), indicating his operation of both merchant and fishing vessels. By act of assembly in 1822, Burns was named one of the commissioners of the Clubfoot and Harlows Creek Canal Company, in which he owned five shares of capital stock. In 1829 he and Dr. James Manney of Beaufort were operating brick kilns to manufacture bricks for the construction of Fort Macon.

Burns's political career began in 1821 with his election to represent Carteret County in the North Carolina House of Commons; he served in the house during the assemblies of 1821–22, 1822, 1824–25, 1825–26, 1826–27, 1827–28, and 1832–33. As a member of the senate from Carteret County, Burns served in the assemblies of 1828–29, 1829–30, 1833–34, and 1834–35. His political career paralleled a time of heavy indebtedness in his private enterprises, there having been at least nine mortgage deeds executed by him in Carteret County between 1821 and 1834, with indications that the debts were increasing in size. His personal fortunes were doubtless worsened by his political fate in 1835. His last act before the adjournment of the General Assembly in early 1835 had been to vote in favor of a state constitutional convention to consider increasing western representation and electing the governor by popular vote. The bill passed the senate by a vote of thirty-one to thirty, and the convention was called. For his vote, Burns was repudiated by his eastern constituency, but Burnsville—seat of Yancey County—was named for him by grateful westerners. A second North Carolina town, Otway in Carteret County, was also named for him. 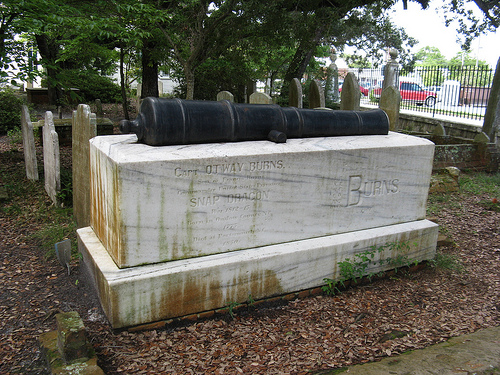 A Democrat in straitened circumstances, he was appointed by President Andrew Jackson as keeper of the Brant Shoals Light-House at Portsmouth in 1836. After his second wife's death in 1839, Burns mortgaged his home at Portsmouth and appears eventually to have lost it to his son Owen, to whom he mortgaged it for seven hundred dollars in July 1840, and who subsequently mortgaged it himself in February 1849. Settling in the Outer Banks village of Portsmouth, Burns settled into his old age; he enjoyed wearing his naval uniform, drinking good whiskey, and quarreling.

Burns was married three times. In youth he had been a neighbor of the Grant family on Queen's Creek, and on 6 July 1809 he was married to Joanna Grant, his third cousin by popular reckoning and a daughter of Colonel Reuben Grant. Early in 1810, Burns bought a lot in Swansboro, and that same year he and Joanna became the parents of Owen, Burns's only child. Burns and his family apparently continued living in the Swansboro area throughout the period of his involvement in the War of 1812 until about the time of his separation from Joanna, when, in January 1814, he gave public notice that he would no longer be responsible for her debts. At about this time, Joanna Burns removed to Jones County, where her next of kin lived; there she died on 6 Sept. 1814, apparently leaving Owen in the care of her relatives for the next few years. The guardianship bond that Otway Burns was required to execute for Owen on 18 June 1819 may indicate the time when Burns first received custody of his son.

Following the death of his first wife, Burns was married to Jane Hall, daughter of David and Naomi Hall of the Beaufort-North River area; born 22 Mar. 1794, she was just slightly over half the age of her husband. This marriage bond was dated 4 Dec. 1814; and five months later, Burns bought house and lot number 16 in Beaufort Old Town, where they took up residence. The second Mrs. Burns died at Portsmouth on 24 Oct. 1839 and was buried in the Anne Street Cemetery, Beaufort.

The third Mrs. Burns was Jane Smith of Smyrna. This marriage bond was dated 22 Feb. 1842; she evidently predeceased her husband, since she was not enumerated in the 1850 census, which listed the solitary Captain Otway Burns as a mariner "in his dotage" living in the home of John S. Hunter of Portsmouth.

Burns's only child, Owen, served in the U.S. Navy from 1834 to 1840. In 1849 he married Martha Armstrong, daughter of Solomon Armstrong and granddaughter of General John Armstrong. Owen and Martha Burns were the parents of I. R., Eugene, Richard Jerome, Charles O., Walter Francis, Edwin Oscar, Owen, Jr., and Lillian.

Burns was buried without ceremony in the Anne Street Cemetery in Beaufort. On 4 July 1901 his grandchildren unveiled there a grave monument surmounted by a cannon, which was dedicated by then Chief Justice Walter Clark but which contained erroneous information about Burns's parentage. A statue of Burns was unveiled at Burnsville on 5 July 1909. An original portrait and photographs of the portrait and monument are in the possession of the Division of Archives and History, Raleigh.

An oil painting of Otway Burns by F. Mahler, ca. 1875-1895. Image courtesy of the North Carolina Museum of History.