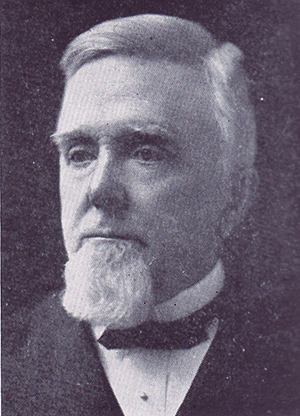 Charles Cauthen Clark, lawyer and politician, was born in New Bern, the eldest child of William Willis and Martha Stevenson Clark. He was the descendant of a wealthy and prominent New Bern family. Elijah Clark, his grandfather, had been sheriff of Craven County, one of the three organizers of the First Baptist Church of New Bern, and a successful merchant. His father was cashier of the Merchant's Bank of New Bern and by 1860 had accumulated $22,000 in real and personal property and seventeen slaves. Charles Clark received his preparatory education at the New Bern Academy and then attended Wake Forest College and Princeton University, obtaining the Bachelor of Arts and Master of Arts degrees from the latter institution in 1849 and 1852 respectively. After reading law with William H. Washington of New Bern, he was admitted to the bar and began an eminent legal career which spanned more than half a century. On 11 Jan. 1854 he married Fannie (Frances) Lawrence Howard, the daughter of a distiller who, like William Clark, was among the largest slaveholders in New Bern. Charles and Fannie Clark had four sons (William, Charles, Jr., George, and Edward) and four daughters (Mrs. Frances Walters, Mrs. Martha Burroughs, Mrs. Susan Heptinstall, and Mrs. Clarita Waters) who lived to adulthood.

By the eve of the Civil War, he had already established himself as one of the social and political leaders of New Bern. During the 1850s he had edited a newspaper for several years, started his law practice, and become a notable figure in the revitalized Whig party in Eastern North Carolina. He was also an active leader in the First Baptist Church (where he often took the pulpit in the minister's absence) and the Worshipful Master of the Saint John's (Masonic) Lodge from 1858 to 1860, a position which he held five times after the Civil War as well.

In 1860, his efforts as a Whig party organizer were rewarded when he was chosen as a presidential elector on the Constitutional Union party ticket and elected to the lower house of the state legislature. In February 1861, he was elected as a Unionist candidate to the convention that was to determine whether North Carolina would leave the Union. The convention proposal itself, however, was narrowly defeated, and the convention did not meet until after Abraham Lincoln had called for 75,000 volunteers after the firing on Fort Sumter. By that time Clark, like most other Whig Unionist leaders, had become resigned to the inevitability of disunion, and he signed the ordinance of secession in May 1861.

He and his family fled New Bern when it was occupied by Union troops in March 1862. Moving to Goldsboro, he soon joined the Thirty-first North Carolina Infantry Regiment, was named commissary sergeant on 22 Sept. 1862, and commissioned captain on 14 Oct. The following month he was elected solicitor of the Second Judicial District by the state legislature, and he resigned his army commission on 8 Dec. 1862. He continued to hold the office of solicitor for the remainder of the war.

After the war, he became one of the recognized leaders of the "Conservative" party, which had arisen as the state's predominant political force during the war years. Along with William Alexander Graham and Josiah Turner, Jr., he was instrumental in persuading Jonathan Worth to oppose Provisional Governor William Woods Holden in the crucial gubernatorial contest held in the fall of 1865. He ran for and won a seat in the state constitutional convention of 1865–66 claiming, like Worth and many other Conservative party candidates, that his antebellum opposition to secession was sufficient proof of his loyalty to the restored Union. In November 1865, he was elected as representative to the Thirty-ninth Congress from the Second Congressional District despite the fact that he could not take the "ironclad oath" of undeviating past loyalty to the Union. Although both of Clark's opponents in the congressional contest could swear to the oath, they received less than ten percent of the district's vote, giving Clark the largest margin of victory of any congressional candidate in 1865. However, due to the inability of six of the state's seven representatives to take the oath and to the growing rift between Andrew Johnson and the moderate and radical Republicans in Congress, North Carolina was denied representation in the Thirty-ninth Congress and Clark never took his seat.

During Jonathan Worth's tenure in office, he was the governor's close personal friend and adviser and in 1866 was appointed a director of the Atlantic and North Carolina Railroad. Though the Conservative party's fortunes temporarily faded with the advent of military reconstruction in the state, he remained an influential figure in the Conservative party and later in the Democratic party. He also managed to increase his personal fortune, despite the fact that much of the inheritance which he had stood to receive from his father and his in-laws had been decimated by the abolition of slavery. He also retained his position of social prominence, serving as Grand Master of Masonry in North Carolina from 1870 to 1872, trustee of Wake Forest College from 1871 to 1873, and trustee of the New Bern Academy.

In 1886 he again ran for office, winning a disputed election to the North Carolina Senate. In February 1887, however, the Senate upheld the challenge of George Green, Jr., of Carteret County, and Clark was removed from office. He returned to the New Bern law partnership which he had formed with his eldest son, William Willis Clark, II, who became a noted lawyer in his own right. The younger Clark was appointed U.S. Judge of the Eastern District of North Carolina in the latter days of the second Cleveland administration, but the appointment was not confirmed by the U.S. Senate. Another son, Edward, served as mayor of New Bern in the 1920s.

Charles Clark remained active in his law practice until the last years of his life. Shaken by the premature death of his son William in 1910, his health declined rapidly, and he died the next year. He was buried with Masonic honors in the Cedar Grove Cemetery, New Bern.

John Nichols, comp., Directory of the General Assembly of the State of North Carolina, for the Session Commencing November 19, 1860 (1860).