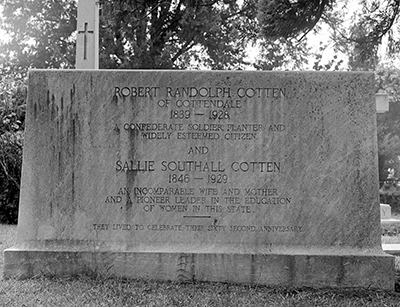 Robert Randolph Cotten, planter and businessman, was born on his father's farm near Whitakers in Edgecombe County. He was the oldest son of John Lewellyn Cotten and his wife, Nancy Bell Penine Tart Johnson. Cotten attended the public schools of Edgecombe County until the age of eighteen. At that time he left school to take a clerkship in the store of a man named Alston at Tarboro. After a year there he attended Baltimore Business College and became a traveling salesman for a year. He then entered into a partnership with Walter Gwynn to form Cotten and Gwynn, a firm of cotton brokers and commission merchants, which operated out of Baltimore for the next twenty-three years.

Upon the outbreak of the Civil War, the firm was dissolved and Cotten returned to North Carolina. Shortly thereafter he joined the Scotland Neck Mounted Riflemen under the command of Captain A. B. Hill. His unit was Company G, Third North Carolina Cavalry, Forty-first Regiment of North Carolina Troops, with Colonel A. M. Waddell of Wilmington commanding. Cotten's outfit did scout work and picket duty in Eastern Carolina and was especially active around New Bern, Washington, and the Wilmington and Weldon Railroad. On one occasion the company was deployed to Virginia, where it was a part of Wade Hampton's brigade on the left of Lee's army during the battle for Richmond. Company G was at Weldon at the end of the war, and Cotten made his way from there to his mother's home.

Immediately, he set to work to reclaim something from the aftermath of the war, opening a mercantile business at Tarboro. It proved such a successful venture that he opened a branch business at Wilson. In addition, he acquired two plantations in Pitt County, which he named Cottendale and Southwood.

In 1869, Cotten moved his business to Wilson, where he continued to operate a store for many years. He also opened a branch store at Falkland, where he moved his family in 1878. The following year he moved to Southwood, and in 1880 the family settled permanently at Cottendale. There he built a noted home and engaged in extensive farming interests for the rest of his life. Simultaneously, he relocated his store at Centre Bluff on the Tar River, where he operated a mercantile business in conjunction with his plantations for twenty-five years. In 1900 he moved his business again; abandoning the river site, he established a store and post office in Pitt County at a spot he named Bruce after an early business associate.

An active member of the Democratic party, Cotten served on the state executive committee. He represented Pitt County in the house of representatives in 1908 and the senate in 1910. Among other positions, Cotten held the chairmanship of the Pitt County Inferior Court, the directorship of the state penitentiary, and also that of the state Hospital for the Insane.

Devout Episcopalians, Cotten and his family were communicants at St. Paul's Church, Greenville, although poor roads often prevented the family's attending services there. Cotten read morning prayer daily at Cottendale and often entertained the bishops and other clergymen.

Cotten was married at Murfreesboro on 14 Mar. 1866 to Sallie Swepson Sims Southall, daughter of Thomas James Southall and his wife, Susannah Sims. The Cottens were the parents of nine children, Agnes, Robert Randolph, Jr., Frederick, Alla, Bruce, Lyman Atkinson, Sallie, Preston, and Elba. Cotten died at Cottendale and was buried in Pitt County.