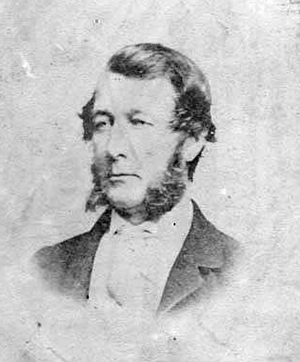 Thomas Morrow Crossan, naval officer, was born in Pittsburgh, Pa., the son of James C. and Nancy Morrow Crossan. He spent much of his childhood in Kentucky with a maternal uncle, Thomas Morrow, and was appointed to the U.S. Naval Academy from Kentucky. He was graduated with an acting midshipman's commission on 1 July 1836; passing through the various grades in the navy, he ultimately resigned his commission as lieutenant on 1 Sept. 1857. An officer for twenty-one years, his service at sea aggregated more than twelve years. He saw much active service in the Mexican War, attached to the Albany, under the command of Captain Isaac Mayo.

On 10 July 1854, Crossan married Rebecca Brehon, daughter of James Gloster Brehon of Warren County. Through this marriage he became connected with the socially prominent Somerville family. The Crossans had an only son, Brehon Somerville, who later moved to Pittsburgh.

When the Civil War began, Crossan was living in Warren County. Although he had many relatives in the North, he volunteered his services to North Carolina, which was establishing a small navy. This organization, under the titular command of former Governor Warren Winslow, secretary of the newly established military and naval board, slowly grew into a small fleet used to patrol the sounds and prey upon Federal shipping. The Raleigh Weekly Register reported Crossan's appointment as a lieutenant in the North Carolina navy on 5 June 1861.

Winslow ordered William T. Muse, another former officer in the U.S. Navy, to purchase vessels in Norfolk and fit them out as gunboats at the Norfolk Navy Yard. One of these vessels, the J. E. Coffee, a 207-ton sidewheel steamer employed in the Chesapeake trade, was equipped with one short thirty-two-pounder cannon and a six-pounder brass rifled cannon and placed under Crossan's command. It was rechristened the Warren Winslow in honor of Secretary Winslow. In mid-June 1861, Crossan sailed the Warren Winslow to New Bern for friction primers and ammunition for his rifled cannon.

Crossan left New Bern in late June and proceeded to harass Federal shipping. On 25 June 1861, with "quite a number of soldiers on board," he captured the brig Hannah Balch, commanded by Sailing Master Albert Kautz of the U.S. Navy. Kautz tried to escape, he wrote, "by setting all sail and running free, but the steamer being a fast one and the brig a slow sailer I was soon overtaken and compelled to surrender." Kautz was sent to Raleigh in Crossan's custody. His captor soon took him to Warrenton, treating him more like a guest than a prisoner.

Crossan captured two more brigs and five schooners before relinquishing command of the Warren Winslow in August 1861. It is a certainty that his activities prompted the Federal attack on Forts Hatteras and Clark in late August.

Governor Henry T. Clark later commissioned Crossan a lieutenant colonel in the Coast Artillery. In January 1862, Brigadier General Richard C. Gatlin, commanding the Department of North Carolina, placed Crossan in command of all the forts on the Neuse River below New Bern, and Crossan greatly strengthened the fortifications at Fort Thompson and the other Neuse batteries. During the Battle of New Bern, 14 Mar. 1862, the Federals made a heavy attack upon Crossan's position at Fort Thompson. Crossan "opened on them with grape from three 32-pounders with such terrible effect that after about six shots they fell back; and though they kept up a constant and warm fire, they made no advance toward the work." As the main Confederate line fell back in great confusion, the fighting at Fort Thompson became desperate, with the fort's interior falling under heavy Federal artillery fire. Crossan spiked all his guns but, because "the enemy pressed on closely," had no time to blow up the magazine; he participated in the retreat to Kinston.

In November 1862, Crossan was ordered by Governor Zebulon B. Vance to accompany Special Commissioner John White to England. Crossan's specific duty was to purchase a British vessel that could be converted into a blockade-runner for North Carolina. He bought the passenger steamer Lord Clyde for thirty-five thousand dollars and quickly renamed it the Ad-Vance, presumably in honor of Governor Vance. With this vessel, Crossan made a number of trips through the blockade to Wilmington, bringing clothing and other military supplies from England and returning with between five hundred and seven hundred bales of cotton on each trip. In early September 1863, Vance seriously considered the sale of the Ad-Vance, with the proceeds to be deposited in England to the credit of North Carolina, but Crossan's success caused him to change his mind.

Blockade-running was a profitable business. Crossan received the monthly pay of a captain in the Confederate Navy and a thousand dollars for each round trip. The vessels' inward cargoes were also valuable, including large quantities of machinery supplies, arms, ammunition, cloth and clothing, food, medicine, and other goods.

Crossan retired to Warrenton late in the war because of ill health. He attempted to engage in business ventures in New York in the summer of 1865 but was unsuccessful, because, as he explained, "Commerce has not resumed its former channel as yet, and the inspirer (not King remember) Cotton is suffering from severe indisposition which I fear is somewhat chronic in its nature." He soon returned to Warrenton, where he died. He was buried in the Somerville Burial Ground, a family cemetery near Warrenton. Crossan named his wife the administratrix of his estate and left the modest sum of $5,300.57 to his family.

Is the Marshall DeLancey

Is the Marshall DeLancey Haywood manuscript "Thomas Morrow Crossan" available digitized online? May / can I obtain this manuscript via Interlibrary Loan?

Thank you for your question about Marshall De Lancey Haywood's "Thomas Morrow Crossan" manuscript. I am unable to find a digitized version of this. According to the article, the manuscript is held by the Manuscript Department at Duke University. I was unable to find this title in their catalog. If you would like to contact Duke Libraries to inquire further, you can find various ways to reach them at https://library.duke.edu/rubenstein/about/contact.