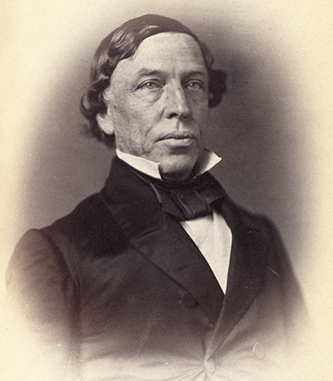 Warren Winslow, governor of North Carolina, congressman, and lawyer, was born and raised in Fayetteville, the son of John, magistrate of Fayetteville, and Caroline Martha Winslow. He had one brother, Edward Lee, and one sister, Lucy Ann Winslow Ochiltree. His grandfather was the Reverend Edward Winslow, a chaplain in the British army.

Winslow was educated at the Fayetteville Academy and at The University of North Carolina, where he received an A.B. degree in 1827. He entered business as a merchant in Fayetteville but was forced to abandon it following substantial losses during the panic of 1837. At this time, he began to study law and soon afterwards was admitted to the bar to practice in Fayetteville.

In 1853 Winslow gained his father's old spot as magistrate of police in Fayetteville. After serving for a year, he ran for a seat in the state senate. Not only was he victorious in this campaign, but he was also elected speaker of the senate. In the fall of 1854, when Governor David S. Reid resigned to take a U.S. Senate seat, Winslow, because of his office as speaker, succeeded him. After much debate over whether Winslow should resign as speaker to become acting governor, the senate decided by one vote to allow Winslow to hold both positions. Winslow, a Democrat, served as both governor of North Carolina and speaker of the Senate from 6 Dec. 1854 to 1 Jan. 1855. He was not a candidate in the 1854 gubernatorial election.

After leaving office in 1855 Winslow was sent to Spain by President Franklin Pierce as a representative during the Black Warrior Affair over the payment of a fine by an American vessel at Havana, Cuba. When he returned to North Carolina, Winslow won a seat in the U.S. Congress and then was reelected, serving from December 1857 to March 1861. In 1860, while a congressman, he was appointed chairman of the Military Board of North Carolina. In 1861 he negotiated the surrender of the Federal garrison in Fayetteville, thus securing over 37,000 stand of arms and munitions for the state. He also served as a member of the North Carolina Secession Convention from 20 May 1861 until his resignation late that year or early in 1862.

An Episcopalian, Winslow was buried in Cross Creek Cemetery, Fayetteville. He had married Mary Ivie Toomer (1811–43), a great-granddaughter of General James Moore; she was buried at Orton. Winslow left no will, but his estate was settled by his sister-in-law, Mary A. Winslow, and produced $14,682 from the trust estate he held for the children of his brother.

Winslow, Warren. "The critical condition of the country: remarks of the Hon. Warren Winslow of North Carolina, in the House of Representatives, January 29, 1861, upon the report of the Committee of the States." Washington: printed by H. Polkinhorn. 1861. https://archive.org/details/criticalconditio00wins (accessed March 25, 2013).