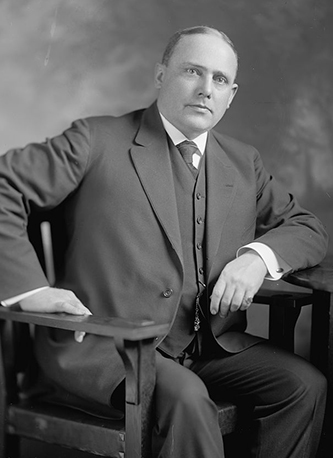 Joseph Moore Dixon, legislator, congressman, U.S. senator, and governor of Montana, was born at Snow Camp, Alamance County, the son of Hugh Woody and Flora A. Murchison Dixon. His father owned an iron foundry. Young Dixon attended Sylvan Academy and New Garden Boarding School near Greensboro before entering Earlham College in Richmond, Ind. He returned to North Carolina to complete his education and was graduated from Guilford College in 1889. He wanted to enter politics but he sensed little opportunity as a Quaker and a Republican in North Carolina. After working for a time in a woolen mill near his home, he moved in 1891 to Missoula County, Mont., where he began to read law in his uncle's office. He was admitted to the bar in December 1892 at the age of twenty-five and practiced for several years.

Dixon's first step toward a career in politics began when he became assistant prosecuting attorney of Missoula County in 1893, serving two years. As a Republican in the election of 1895, he won the race for prosecuting attorney, defeating his Democratic boss. In 1900 he was elected to the state house of representatives and in 1904 he was a delegate to the Republican National Convention in Chicago. Early in the new century he purchased the local daily newspaper, the Missoulian, which provided a springboard for further political advancement. He served a second term in the legislature and two years later was elected to the United States Congress, serving from 4 Mar. 1903 to 3 Mar. 1907. While in Congress he was active in securing larger homesteads, long- and short-haul regulation of railroads, and the opening of the Flathead and Crow Indian Reservations in Montana to settlement by non-Indians. He continually advocated federal funds for irrigation and woman suffrage.

Ultimately Dixon was a delegate-at-large to the Republican National conventions in Chicago in 1904 and 1916. In addition, he was elected to the U.S. Senate in 1906, serving from 4 Mar. 1907 to 3 Mar. 1913. An unsuccessful candidate for reelection in 1912, he was named chairman of President Theodore Roosevelt's Progressive convention the same year. He became a close friend of Roosevelt and was his campaign manager on the "Bull Moose" ticket, which split the Republican party and resulted in the first election of Woodrow Wilson to the presidency.

In 1913 Dixon resumed the practice of law, edited a Missoula newspaper, and managed a dairy farm. He returned to politics in 1920 and was elected governor of Montana, serving from 1921 to 1925. He ran as a Republican and defeated his Democratic opponent, Burton K. Wheeler, by 111,113 to 74,875. During Dixon's one term in office he brought reform to state government, including a very controversial modification in the method of taxing the state's large copper mining industry. Due to his progressive programs, he lost his bid for reelection in 1924. Four years later he was also defeated when he ran again for the U.S. Senate. During the administration of President Herbert Hoover, Dixon was acting secretary of the interior and later first assistant secretary of that department.

Dixon married Caroline M. Worden on 12 Mar. 1896; their children were Mrs. Virginia Dean, Mrs. Florence Leach, Mrs. Dorothy Allen, Mrs. Mary Jo Hills, Mrs. Betty Stearns, Frank, and Peggy. He died in Missoula and was buried in the city cemetery. Since 1958 the childhood farmhouse home at Snow Camp has been open to the public during July and August.

Robert Sobel and John Raimo, Biographical Directory of the Governors of the United States, vol. 3 (1978).