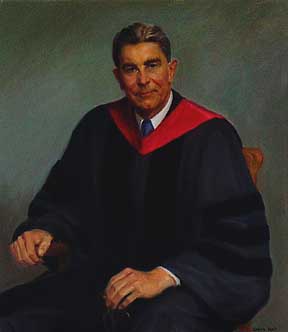 Arthur Hollis Edens, educator and foundation executive, was born in Willow Grove, Tenn., the son of Everett C., a Methodist minister, and Barbara Ellen Jolly Edens. His education began in the public schools of Clay County, Tenn., in which he later taught. He attended the Cumberland Mountain School, Crossville, Tenn. (1921–24), earned two degrees at Emory University (B.Ph., 1930, and M.A., 1938), and studied at the University of Chicago (1941). From Harvard University he received a master's degree (1944) and a doctorate (1949)—both in public administration.

Edens's rise in the educational world was rapid: at the Cumberland Mountain School he was successively teacher (1926–27), assistant principal (1929–30), and principal (1930–37). He was associate dean of the Emory Junior College, Valdosta, Ga. (1937–42), then associate dean of the Emory undergraduate college in Atlanta (1942–44), where he became associate professor of political science (1944–47) and dean of administration (1946). In 1947 he was appointed vice-chancellor of the University System of Georgia, in 1948 associate director of the General Education Board of the Rockefeller Foundation, and in 1949 president of Duke University.

Edens became president of Duke in a time of transition when its chief builders had passed, or were passing, from the scene. Comfortable with the aims and traditions of the university, he felt that the policy of the new administration should be "one of development, not expansion," and that the existing interests of the comparatively small university should be strengthened rather than diversified. The first tasks were to provide for increased enrollments, better faculty salaries, and further development of the graduate program. Always the faculty should be "free to teach and its students to learn without intimidation or fear." 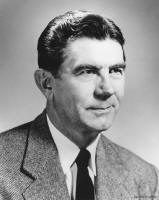 Immediate attention was given to a fund raising campaign. To the success of a revitalized Loyalty Fund was added a large matching gift from the General Education Board and a smaller one from the Carnegie Foundation. In the next five years the university invested over $6,000,000 in new construction and repairs, including a new wing of the hospital and the men's Graduate Center, which opened in the fall of 1953. In 1952 the Duke Endowment establishment James B. Duke professorships to reward the more distinguished scholars on the faculty. The Duke Endowment also provided $750,000 for fellowships in the Graduate School. The U.S. Public Health Service awarded Duke $1,500,000 to establish a regional center for the study of aging. In addition a Rule of Law Center was created for the study of international affairs, and the Commonwealth Center, with special attention to Canadian affairs, was established through a gift from the Carnegie Corporation.

Early in Edens's tenure he appointed Dr. Paul M. Gross, professor of chemistry and dean of the Graduate School, to be vice-president in the educational division and dean of the university. Edens, whose educational background was in the social sciences, thought it would be helpful to have a natural scientist in close association with the administration. Eventually, however, there came to be differences of opinion between the president and the dean on the best ways to promote the welfare of the university. Gross complained that the administration devoted "entirely too much time to matters of purely budgetary assignment and detail," that the need was for long-range planning and policy discussions on which the future of the university would depend. He expressed the hope that the resources of the university could be expanded until Duke was among the first ten in the nation. In his report to the trustees for 1957–58, Edens noted that a Long Range Planning Committee had been set up with Vice-President Gross, who had been relieved of his duties as dean, as chairman. The first report of the committee set as goals higher salaries, building projects, the strengthening of existing areas of the university, and the establishment of an Office of Development. Edens in his report to the trustees said, "I hope I have conveyed my own enthusiasm for the prospects ahead." 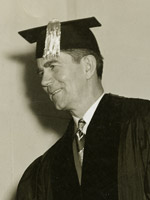 Early in 1960 rumors began to circulate in the local press that there was trouble between Edens and Gross, caused by the president's opposition to some of the features of the long range plan, which he considered too expansive and too extravagant; that there had been a proposal to make Edens chancellor, without any executive duties; and that there was to be an administrative reorganization. This news seemed to reflect the Gross view. Edens said nothing at all. He made no attempt to rally his friends, for he had resolved to resign. Although the administration of the university was in the hands of the trustees, the principal funds were controlled by the endowment trustees who were reported to be in sympathy with Gross. On 16 Feb. 1960 Edens informed the university trustees by letter that he expected to resign at the next meeting of the board, the resignation to take effect when his successor was elected. He said that the next ten years in the life of the university were "going to demand vigorous promotion and management on the part of an administrative leader who could be expected to remain at the helm" over a longer period of time than he would wish for himself. When the trustees met on 23 Mar. 1960, they accepted Edens's resignation "with reluctance." They also "demanded" that Gross resign as vice-president and as chairman of the Long Range Planning Committee. He was to remain on the faculty as William H. Pegram Professor of Chemistry, however.

Edens continued as president until 30 June 1960; his successor, Dr. Deryl Hart of the Duke medical faculty, took office 1 July 1960. The chairman of the board of trustees authorized the university to retain Edens as a consultant for ten years at a salary of $18,000 a year. With some reluctance he accepted; he understood that the funds did not come from the resources of the university itself. After an extended vacation with his family, Edens was retained by the directors of the Mary Reynolds Babcock Foundation as its first executive director. This appointment extended from 14 Aug. 1961 to 31 Aug. 1966, when he retired. In his first year the grants totaled about $1,500,000, in his last year nearly $6,000,000. The grants went to charitable enterprises and generally were related to educational programs or social institutions and not restricted geographically within the United States.

After retirement Edens moved to Decatur, Ga. From his summer home near West Jefferson, N.C., he made his last journey to the Emory Hospital where he died of cancer. He was buried in the Decatur Cemetery.

Edens received honorary degrees from Emory University, Davidson College, The University of North Carolina, Wake Forest College, Roanoke College, American University, Northwestern University, and the University of Chattanooga. He was a member of numerous boards and commissions having to do with educational affairs. He was president of the National Association of Schools and Colleges of the Methodist Church (1954), president of the National Commission on Accrediting (1954–56), and a member of the President's Commission on Education beyond the High School (1956–57). He also served two terms on the executive committee of the Southern Association of Colleges and Secondary Schools. In 1964 he became a member of the Emory board of trustees. He was a member of Phi Beta Kappa, Omicron Delta Kappa, and Sigma Chi. He was a Democrat, Methodist, Mason, and Rotarian.

At Emory Edens was an outstanding intermural football player, and his golf was above average. In making his way in the world from the mountains of East Tennessee to a university presidency he had been a lumberjack, boss of a road gang, laborer in an Akron rubber plant, night watchman, rural mail carrier, and volunteer preacher serving seven rural churches.

On 29 Dec. 1930 Edens married Mary Kathleen Bussell of Livingston, Tenn. They had one child, Mary Ann, who became the wife of Jefferson L. Wingfield, Jr.

Edens Papers and Minutes of the Board of Trustees (Manuscript Department, Library, Duke University, Durham).