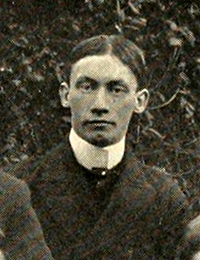 Garland Sevier Ferguson, Jr., chairman of the Federal Trade Commission, was born in Waynesville, the son of Garland S. and Sarah Frances Norwood Ferguson. He entered The University of North Carolina in September 1894 but withdrew the following April to attend the U.S. Naval Academy. He left the academy before graduating, however, and subsequently entered The University of North Carolina law school from which he was graduated in 1900. In 1939 the university awarded him an honorary LL.D. degree.

Admitted to the bar in 1900, Ferguson established a practice with his father in Waynesville. After his father's elevation to the bench two years later, he moved to Greensboro to practice law in association with W. P. Bynum and others before moving to Washington, D.C., in 1908. From 1908 to 1918 Ferguson served as a referee in bankruptcy in the United States District Court, Western District of North Carolina; from 1903 to 1918 he was also special counsel to the Southern Railway in Greensboro. In 1918, during World War I, he became assistant to the general counsel of the Newport News Shipbuilding and Dry Dock Company, headquartered in Washington, and held the position until 1921. From 1921 to 1927 he practiced in Greensboro.

In 1927 Ferguson was named to the Federal Trade Commission by President Calvin Coolidge. He remained on the commission until 1947, serving under presidents Coolidge, Hoover, Roosevelt, and Truman; during much of this time he was chairman. Between 1921 and 1949 he served on a number of federal committees and related posts, including the National Emergency Council (1934) and the Temporary National Economic Committee (1938–41) of which he was chairman in 1939. He also was the chairman of a committee appointed by the secretary of the army in 1948 to conduct hearings in Frankfurt, Germany, and elsewhere, to review the decartelization and deconcentration program in Germany. Upon his retirement in 1949, Ferguson was praised by President Truman for "his immense contributions in protecting the public interest."

Ferguson married Margaret Merrimon in 1907, and they were the parents of three children: Margaret Merrimon, Sarah Norwood, and Garland S., III. He was a member of the Methodist church; he died in Washington after a lengthy illness.