Thomas Jefferson Finch, pioneer furniture manufacturer, banker, and farmer, was descended from English settlers who came first to Virginia and then to Person County, N.C. Succeeding generations moved to Randolph County. He was born in the Pleasant Hill section of Tabernacle Township in Randolph County, about ten miles south of Thomasville, the son of Alfred Benjamin (son of Pettis and Frances Ranchor Pope Finch), and Lucy Andrews Finch who also had six other children. Thomas Jefferson was the oldest of three sons to reach maturity; all were successful farmers and together owned a general store. Thomas Jefferson, who worked in the store and on the farm in early life, learned the value of industry and thrift.

Young Finch received his education in the country school near his home and later at Trinity College, then in Randolph County. Between Trinity and Thomasville his uncle and aunt, Thomas Austin and Rebecca Dorsett Finch, a childless couple, resided on a large farm. At their insistence nineteen-year-old Thomas Jefferson went to live with them and look after their affairs. When they died he inherited their estate, including the farm, Wheatmore, which became his home for the remainder of his life. A few months after their death, he married Hannah Louise Brown, daughter of Dempsey and Eliza Ann Laughlin Brown and granddaughter of John and Jane Clark Brown. In 1837–38 John Brown and his kinsmen had built on his plantation in Randolph County Brown's Schoolhouse for the schooling of their own and neighbor's children. This school was the beginning of Trinity College (later Duke University). Hannah's father, Dempsey Brown, in later years donated land for Hopewell Methodist Church and its cemeteries for Negroes and whites. Hannah Brown Finch was an 1885 graduate of Greensboro College.

Thomas J. and Hannah Brown Finch were the parents of six sons: Thomas Austin; Brown, who was killed in a railroad wreck in 1925; Gray and Charles, who died in their youth; Doak; and George Davis. When the younger sons reached school age, Finch built and opened a schoolhouse at Wheatmore for his own, the farm employees', and a few of his neighbors' children; the schoolteacher lived at the "Big House." Wheatmore also had a post office, which was operated by Mrs. Finch in the absence of her husband.

After Finch had added four hundred acres to his original tract and had developed the farm until it was a model for the county, he turned his attention to politics. A lifelong Democrat, he was elected county commissioner in 1892, and remained in office for several years. Later, he served two terms as sheriff of Randolph, a county normally Republican. He was for some time a county school board member and took much interest in public issues of the day. During World War I President Woodrow Wilson appointed him to the state exemption board, which consisted of three members from across the state. For a time he served on the state agricultural board and in his later years was a director of the North Carolina Railroad. In 1924 he was a delegate to the Democratic National Convention in New York. 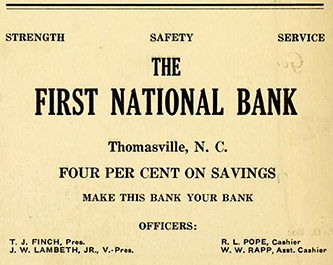 Finch first became interested in Thomasville in 1897, when he and his nephew, C. L. Harris, opened a general store there. Two years later he joined Jesse F. Hayden in organizing a telephone company and in purchasing the High Point Telephone Company. The same year he was one of the incorporators of the Bank of Thomasville, and in 1907 he became a director and vice-president of the First National Bank. In 1917 he was named president of the First National Bank, a position he held through the war years and the recession immediately thereafter. He was one of the first directors of the Peoples Building and Loan Association (1909), an organizer and first president of the Carolina Bank & Trust Company of Denton (1924), president of the Thomasville Realty & Trust Company, and a director of the High Point, Thomasville & Denton Railroad.

His greatest contribution to Thomasville and the Piedmont area, however, was his pioneering in furniture manufacturing. About the turn of the century he and his brother, Charles F., went into the lumbering business, buying timber and sawing it into lumber, which they sold for building material and furniture making. This led to their purchase in 1907 of the Thomasville Chair Company, then consisting of only one small factory. They bought another factory in 1909 and two more a few years later. Thomas Austin, the oldest son of Thomas Jefferson Finch, joined the business in 1909 and another son, Brown, in 1914. By purchasing the interest of Charles F. Finch in 1925, Thomas Jefferson Finch and members of his family became the owners of the company and incorporated it; the same year his sons Doak and George also joined in its operation. Thomas Jefferson Finch remained at the head of this large family enterprise for the remainder of his life. In twenty-two years the company grew from one small factory to one of the largest plants in the Piedmont area with capital stock of $1.5 million and close to a thousand employees. Along with a few other leaders, he had recognized the potential of furniture manufacturing in the South and had begun developing Piedmont North Carolina into an industrial region.

Finch was a member of the Masonic Lodge, of the local Rotary Club, and of many other civic organizations. His interest in the building of Memorial Hospital in Thomasville led him to contribute a large sum—matching the Duke Foundation grant—to ensure its construction. He was a member of Hopewell Methodist Church, where he was a steward for many years. He was interred in the family mausoleum in Hopewell Cemetery.

Jessie Owen Shaw, The Johnsons and Their Kin of Randolph (1955).