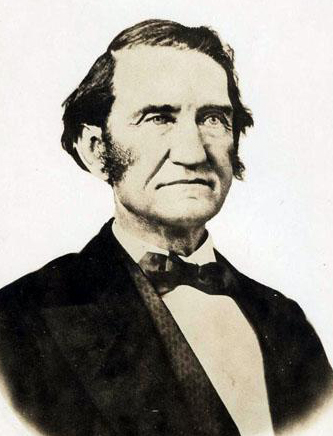 Burgess Sidney Gaither, lawyer, solicitor, speaker of the North Carolina Senate, member of the Confederate States Congress, and superintendent of the U.S. Mint at Charlotte, was born on Rocky Creek in the Tabor Church community near Turnersburg in Iredell County. He was the eighth son of Burgess and Amelia Martin Gaither. His father represented Iredell in the House of Commons each year from 1796 through 1801. The Gaithers descended from a distinguished Maryland family that traced its ancestry to Jamestown, Va. Young Burgess was educated at Dr. James Hall's school at Bethany Church in Iredell and, after moving to Morganton about 1829, at Morganton Academy. For a brief period in 1830 he studied at the University of Georgia. Before that he studied law under his older brother, Alfred Moore Gaither, and after his brother's death under Judge David F. Caldwell of Salisbury. He was admitted to the bar in 1829.

From the outset of his career Gaither impressed his peers with his legal ability. Appointed clerk of the superior court of Burke County in 1830 by Judge Willie P. Mangum, he served until 1837. At age twenty-eight he was elected to represent Burke in the Constitutional Convention of 1835, which convened in Raleigh on 4–11 July. He was the last surviving member of that convention. In 1840–41 he represented Burke County in the state senate.

A Staunch Whig party leader, Colonel Gaither, as he was generally called, was a delegate to the Whig National Convention of 1839 in Harrisburg, Pa. Rewarded for his party loyalty, he was appointed superintendent of the U.S. Mint in Charlotte by President John Tyler in 1841; resigning from the state senate on 31 August to accept that post, he served until 1843. He was reelected senator from Burke in 1844 and served that year as speaker. Continuing in public office, he was from 1844 to 1852 solicitor of the geographically large Seventh Judicial District, which extended from Burke and Cleveland counties to the Tennessee border; travel and court sessions provided a good political base in western North Carolina. In 1851 and 1853 he sought a seat in the United States Congress but failed to defeat the Democratic nominee, Thomas L. Clingman. He served in the House of Commons in 1852 and in the state senate in 1860–61.

As the divisive issues leading to the Civil War were incubating in 1860, Gaither supported the Consolidated Union party; however, when Abraham Lincoln called for troops on 15 Apr. 1861, he changed his position and sided with the Confederacy. Earlier that year, on 12 February, he had written William A. Graham that he strongly opposed secession but could "see no hope for anything else but a civil war of interminable extent."

Having made the change to a Secessionist Gaither was elected to the first Confederate States Congress from the Ninth District and qualified on 18 Feb. 1862, representing Alexander, Alleghany, Ashe, Burke, Caldwell, Davie, Iredell, Surry, Wilkes, and Yadkin counties. Easily reelected two years later to the Second Confederate Congress, he qualified on 2 May 1864 and served to the end of the Confederacy in 1865. As a delegate, he was chairman of the committee to investigate the Roanoke Island disaster. Supporting the Confederacy's central government when its jurisdiction was clear, Gaither vigorously opposed any effort to encroach on the rights of states and individuals. He led the defense in March 1863, when the loyalty of North Carolina was impugned in legislative debate in Richmond. He was the lone member of the North Carolina delegation who favored arming enslaved people.

After the war Gaither resumed the practice of law in Morganton. As a Conservative party advocate and later as a Democrat, he strongly opposed Reconstruction. Although Governor Jonathan Worth and others sought a presidential pardon for Gaither, W. W. Holden refused to approve it. Nominated in 1868 for the U.S. House of Representatives by the Conservative party, he was defeated by Alexander H. Jones of Asheville. During the campaign he spoke out strongly against the 1868 Constitutional Convention.

Gaither married twice. His first wife was Elizabeth Sharpe Erwin, of Morganton, whom he married on 30 July 1830 and who died 30 May 1839. The children by his first marriage were two sons, William and Alfred Haywood, and a daughter, Delia Emma, who married Dr. R. T. Pearson of Morganton. Later he married Sarah F. Corpening by whom he had a son, Burgess Sidney, Jr. A member of the Presbyterian church and a leader in the Sons of Temperance, he continued to practice law in Morganton until his death. He was buried in the old Presbyterian Church cemetery in Morganton. When the cemetery was altered to enlarge the church, his gravestone was lost and his grave is not marked.