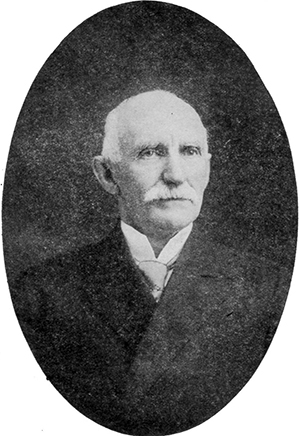 Alexander Graham, father of the North Carolina graded school system, was born near Fayetteville of Scottish ancestry, the son of Archibald and Anne McLean Graham. He was a descendant of Colonel Alexander McAllister, a field officer in the Revolutionary War. Graham grew up in a large family and attended private schools in Fayetteville until he was sixteen. In 1862, he became headmaster of Richmond Academy near Spring Hill where he taught for two years. He closed the school in order to fight for the Confederacy, serving during the last year of the war in Company B, Third Regiment of North Carolina State Troops. He was captured by Sherman's army in the Battle of Bentonville and released at the end of the war.

For a short time, Graham taught in Bladen County, but his small salary was often unpaid and he was determined to further his education. To earn money for college, he drove a peddler's wagon in South Carolina. In 1866 he entered The University of North Carolina, where he became a member of Zeta Psi fraternity and the Philanthropic Literary Society; he also was captain of the baseball team. The university awarded him a bachelors degree in 1869, a masters degree in 1880, and an honorary doctor of laws in 1920. Following graduation he taught for two years in Bladen County. Afterwards in New York City he taught Greek in the Anthon School for two years and studied law at Columbia University, receiving the LL.B. degree in 1873. The same year he returned to Fayetteville and established a law practice.

During the next five years, Graham married and began to raise a family. As his children grew, he became increasingly interested in public education. Greensboro and Charlotte already had graded schools, whereas Fayetteville had only private and ungraded public schools. Graham was asked to organize a graded school in Fayetteville and to become the superintendent as well as one of the teachers. Subsequently he established a high school, integrating in the curriculum subjects that would prepare students for college. By 1888, he had become so well known that he was frequently asked by other municipalities to organize their schools into graded systems. For fifty years, in addition to his other work and at his own expense, Graham traveled throughout the state organizing graded schools.

In 1888, he began a long relationship with the Charlotte city schools—as superintendent for twenty-five years, as assistant superintendent for another fourteen years, and as superintendent emeritus until his death at age ninety. In 1892, he established in the Charlotte system the first manual training school in North Carolina. Before his educational duties became statewide, he taught Latin, Greek, physics, geometry, astronomy, and literature. A number of graded school buildings in the state were named in his honor—among them, one in Fayetteville and one in Charlotte.

Graham held various offices in the educational field, including the presidency of the North Carolina Education Association and the trusteeship of the Agricultural and Technical College in Greensboro, He also wrote a history of Mecklenburg County and was an active member of the Second Presbyterian Church of Charlotte.

In January 1875, Graham married Catherine ("Kate") Bryan Sloan, the daughter of Dr. David Dickson Sloan of Sampson County. They had nine children: David, the oldest, who was killed at Château-Thierry in World War I; Archibald, who became a physician in Minnesota; Neill, who died early in adult life; George, who became a prominent educator in Atlanta; Mary and Hattie, who were teachers in the North Carolina public schools; Frank Porter, who became president of The University of North Carolina; and Mrs. Shipp Sanders and Mrs. Henry Shanks, who became the wives of university professors at Chapel Hill. Graham also was an uncle of Dr. Edward Kidder Graham, president of The University of North Carolina from 1915 to 1918.

Graham died at his home in Charlotte and was buried in Elmwood Cemetery.

John A. Oates, The Story of Fayetteville and the Upper Cape Fear (1972).

You have an incorrect link in

You have an incorrect link in the first paragraph. Where it says “Colonel Alexander McAllister,” it directs to an article about a different person by that name, someone born 1862. Thanks.

Thank you for catching that.

Thank you for catching that. I will let staff know.