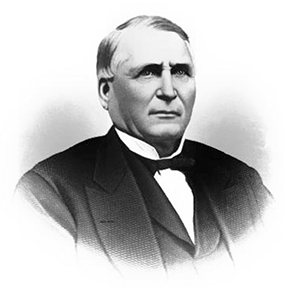 John Green, attorney, judge, farmer, and Indiana official, was born in what became Yancey County, probably in that portion that was then Rutherford County. His parents were James and Catherine Blankinship Green; the Blankinship family was fairly numerous in Rutherford County at the time of the 1810 census. When he was three the Greens moved to Jefferson County, Indiana Territory, and in 1828 young Green entered Hanover Academy, predecessor of Hanover College, where he remained for five years. While in school he intended to prepare for the Presbyterian ministry, but upon leaving he settled on a farm until 1839, when he began to study law with Wilberforce Lyle in Madison, Ind. An injury in a buggy accident that left him crippled for life delayed his studies, but he was licensed in 1842 and established his practice in Madison. He was soon permitted to practice in federal as well as state courts and enjoyed a wide clientele.

From his early thirties Green held a series of public offices in the community and state: militia officer, justice of the peace, school system trustee, state senator, and district judge. He also was active in the construction of two railroads, the Lafayette, Muncie and Bloomington and the Indianapolis, Peru and Chicago lines. From 1848 until his death Green lived on the outskirts of the town of Tipton. He was a Whig while that political party was active and then he became a Republican. He was married first to Mrs. Mary Blankenship Marshall by whom he had five children; after her death he married Catherine A. Humerickhouse (d. 1875), and thirdly, Mrs. Caroline Cottingham Passwater.

A Biographical Directory of the Indiana General Assembly (1980).

A Biographical History of Eminent and Self-Made Men of the State of Indiana (1880).