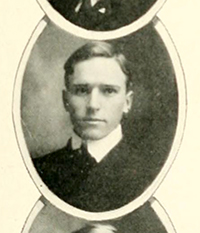 Fletcher Harrison Gregory, banker and businessman, was born at Halifax of English and Scottish ancestry. He was the son of John Tillery and Ella Clark Gregory and the grandson of Thomas Wynns Gregory, a physician, who established the family in Halifax County in the early years of the century. His father, a merchant and farmer, served with the Confederate Army throughout the Civil War; in later life he was for many years clerk of the superior court of Halifax County. Young Fletcher, like his older brother Quentin, with whom he was closely associated throughout most of his life and who survived him, attended Horner Military Academy at Oxford and then went on to The University of North Carolina. There he received the A.B. degree in 1904 and served as an assistant in the physics department during his senior year. Returning to Halifax to help with the family store and farms, he played a key role in organizing the Bank of Halifax, which opened in October 1906. The new bank was soon his main business interest, and he guided it with skill and sound judgment.

In 1920 his brother Quentin, who had been with the British-American Tobacco Company in the Far East for fifteen years, returned to Halifax and joined him in the banking business. The two brothers, with Quentin as president and Fletcher as executive vice-president, increased substantially the capital stock of the Bank of Halifax, which grew steadily during the 1920s to become one of the soundest and strongest banks in the state. It not only took the Great Depression in stride but it also gained in deposits each month during 1933 with its "banking holiday." Between 1933 and 1936 the Bank of Halifax took over the banks of Scotland Neck, Weldon, and Littleton, and a few years later established a branch at Enfield. It was then a solid and prosperous banking system serving a sizable segment of eastern North Carolina. The bank owed much of its success to the fact that the Gregory brothers knew personally most of their clientele, and were thus personal bankers in the best and fullest sense. In 1968, when Fletcher was 86 and Quentin 88, the Bank of Halifax—still strong and solid—merged with Branch Banking and Trust Company of Wilson, the oldest banking firm in the state.

Though Fletcher Gregory made his main contribution to the economic life of his region as a banker, he was a well-rounded man who contributed in many areas. He took the lead in reorganizing the textile mill at Scotland Neck as the Halifax County Hosiery Mill and served as its president for many years, and he was active at one time or another in both ginning and milling enterprises at Halifax. Outside the business field, he served as state senator in 1929, as a member of the board of trustees of The University of North Carolina for a time, and as chairman of the Board of Education of Halifax County for several years. He also was one of the founders and a lifelong member of the Roanoke River Basin Association. Above all, Gregory was a strong family man, viewing the family as the most basic institution. In 1916 he married Boyd Thorne of Airlie, and to them were born one daughter, Mrs. Agnes Carter of Roanoke Rapids, and three sons: Fletcher H., Jr., of Weldon, Samuel T. of Scotland Neck, and Thorne of Wilson, all of whom survived him. An active Episcopalian and Mason, Gregory was a superb representative of that stratum of solid and substantial citizens who believe that hard work, honesty, and thrift are cardinal virtues and who over the years have contributed so much to the growth and strength of the state and nation. He died in Parkview Hospital in Rocky Mount and was buried at Halifax. There is a portrait of him by Barringer Studios of Rocky Mount.

Records of the Bank of Halifax (Halifax).