James Redding Grist, planter and businessman, the eldest of thirteen children of Allen and Mary Ann Williams Grist, was born in Beaufort County near Washington. His forebears were in Beaufort County before 1752 and his grandfather, Reading Grist, and great-grandfather, John Grist, were patriots in the Revolutionary War. As his father was the perennial sheriff of Beaufort County and a substantial landholder, young Grist received a good education in local schools. In adult life he followed his father in farming and in the production of naval stores, staple products in Beaufort County since colonial times. Grist was a leader in the expansion of the naval stores industry south of the Cape Fear River in the 1840s. In 1843, he formed with his father the firm of A. & J. R. Grist, purchased 6,000 acres of pine land in Brunswick County, and moved there to develop a major turpentine plantation with slave labor. The firm also operated a store and a turpentine distillery. 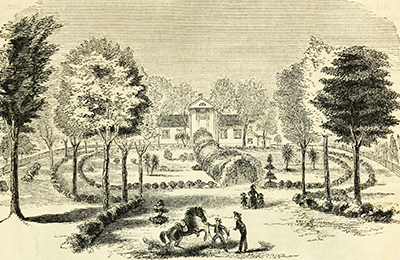 In 1850, leaving his cousin Benjamin Grist as overseer of his Brunswick plantation, Grist moved to Wilmington from where he could better direct his expanding business interests. With the building of the Wilmington and Manchester Railroad in 1852, he sold part of his Brunswick land and purchased land along the railroad in Columbus County for a new turpentine plantation with a distillery and a shipping point, which became known as Grist's Station. With John T. Council he developed another plantation on the Wilmington, Charlotte and Rutherfordton Railroad in Bladen County, known as Council's Station. In the mid-1850s he had yet another plantation at Willis Creek on the Cape Fear River near the Bladen-Cumberland County line to which Benjamin Grist was transferred. With credit lines established through R. M. Blackwell and Company of New York, Grist was able to supply capital to other partners who owned turpentine land for development. He was also involved with the Brothers Steamboat Company, which transported naval stores and supplies on the Cape Fear River from Fayetteville to Wilmington. One of the company's vessels bore his name. With the waning of turpentine production in the Cape Fear area in the late 1850s, the firm opened an extensive turpentine plantation in 1858 in the Mobile Bay region of Alabama, with Benjamin Grist again as overseer. Production from this source in 1860 amounted to more than $60,000.

Meanwhile, in 1855, Grist had moved from Wilmington back to Washington, perhaps because of the advancing age of his father and also because he had purchased two additional plantations that would require closer supervision. Total cotton production by the Grists in 1860 was estimated to be 250 bales. In 1860, at age forty-two, Grist was listed as owning $30,000 in real estate and $76,400 in personal property, including eighty-four slaves. A. & J. R. Grist, turpentine farmers, were listed as owning $44,000 in real estate and $125,750 in personal property, with seventy-two slaves. As his wealth increased, Grist followed the planter pattern of the 1850s, building an elaborate home in Washington, Elmwood, and furnishing it with expensive furniture. Situated at the west end of Main Street facing east, with spacious lawns, it was the showplace of Washington.

During the Civil War Grist served as second lieutenant in the Washington Home Guard and attempted to carry on his business by smuggling naval stores through the blockade. In the postwar years, bereft of his fortune and his labor force, he liquidated his Mobile operation to resolve his debts, obtained new credit in 1868 through Zophar Mills, a commission merchant in New York, and resumed general farming. He purchased a cotton gin and a peanut picker and entered both cotton planting and ginning and the peanut business. His health failed, however, and he died at his home at age fifty-eight before he could recoup much of his fortune. An Episcopalian, Grist was buried in the Old Grist Cemetery near Chocowinity.

Grist was a loyal Whig throughout that party's life, but despite his father's perennial success in politics never seems to have aspired to political office. He was always the planter and businessman and his letters portray him as one who was given to close management, constant supervision, and a steady drive toward the accumulation of wealth. He seems, however, to have been a devoted husband and a loving father. On 15 Nov. 1838 he married Elizabeth Snowden Trotter Latham, and they had nine children: Mary, Samuel, Ella, Olivia, James, John, Claudia, Elizabeth, and Annie. Oil portraits of Grist and his wife were painted in 1860, probably by the same artist who painted those of his father and mother, William Garl Browne. They are currently owned by William and Elizabeth Oden of Washington, N.C.