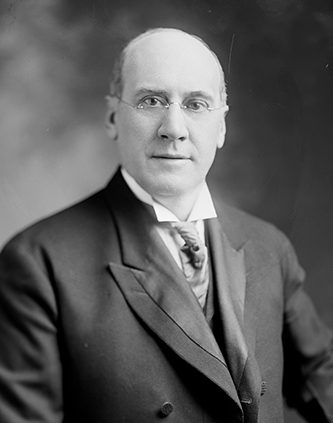 Courtney Walker Hamlin, congressman from Missouri, was born in Henderson (now Transylvania) County, probably in present Cathey's Creek Township, the son of Eliakim Smith and Julia Ann Barton Hamlin. Moving with his parents to nearby Pickens County, S.C., before 1866 and to Missouri in 1869, he grew up on a farm and was educated in local common schools and at Salem (Mo.) Academy. His parents apparently returned to North Carolina, as his father died in Transylvania County in 1910 and his mother three years later.

After reading law, young Hamlin was admitted to the bar on 21 Mar. 1882. He served two years as attorney for the town of Bolivar and for six years was a member of the board of education in Springfield, both in the southwestern part of the state. A Baptist, he also taught a men's Sunday school class. Hamlin served a term in Congress from 1903 to 1905. Although defeated for reelection in 1904, he recaptured his seat in the next election and continued to serve five more terms. On Capitol Hill he was an advocate of woman suffrage. Returning to Missouri in 1919, he practiced law in Springfield until his retirement in 1935. He then moved to Santa Monica, Calif., to live near his daughters. He died at age ninety-one, believed at that time to be the oldest living former congressman. His remains were returned to Springfield for burial in East Lawn Cemetery.

Hamlin married Annie L. Lamar of Bourbon, Mo., in 1881, and they were the parents of Pearl, Cressie, and Carl.

Official Manual of the State of Missouri (1918).