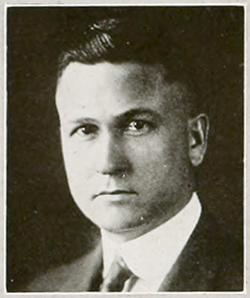 John William Harrelson, educator and soldier, was born in the Double Shoals Community of Cleveland County, the son of John H. and Ellen Williams Harrelson. His father was a tenant farmer. In 1905, young Harrelson entered the North Carolina College of Agriculture and Mechanic Arts (North Carolina State University at Raleigh) to study textiles. His interest soon turned to mechanical engineering, however, and he received his bachelor's degree in that field in 1909, graduating first in a class of sixty-three.

Although he had passed a competitive examination for a regular army commission, Harrelson chose instead to stay at his alma mater as an instructor in the Mathematics Department. By 1921, he had become a full professor. He was granted a leave of absence from State in 1929, when Governor O. Max Gardner appointed him director of the State Department of Conservation and Development. Harrelson returned to North Carolina State in 1933, and after a year as head of the Mathematics Department he was appointed dean of administration (title changed to chancellor in 1945) under the Consolidated University System. He was the first State alumnus to head his alma mater. During his administration, there was tremendous growth in the teaching, research, and extension programs of the university. Twenty-one major buildings were added to the campus, the faculty increased by four times, and the student body tripled in size. When he retired as chancellor in 1953, Harrelson was appointed college archivist, a position he held until his death. He received an honorary doctor of laws degree from Wake Forest College (1941) and an honorary doctor of education degree from North Carolina State (1954).

Harrelson's military career spanned four decades and included two periods of active service. He was a lieutenant in the Coast Artillery, North Carolina National Guard, when the United States entered World War I in April 1917; in July his unit was mustered into service. By the summer of 1918, he had been promoted to major and was serving in the personnel branch of the War Department's General Staff in Washington, D.C. Shortly after receiving his discharge in August 1919, Harrelson was commissioned a lieutenant colonel in the Coast Artillery Reserve. He was promoted to colonel in 1923. In 1927, he was transferred to the Field Artillery Reserve and assigned to the 316th Field Artillery Regiment, 81st Division. In 1934, he was appointed North Carolina's civilian aide to the secretary of war, a post of responsibility in handling enrollment for the Citizens Military Training Corps. During World War II he served as deputy chief of the army's Specialized Training Program, in the Fourth Service Command, with headquarters in Atlanta. At the time of his death, he was a colonel in the U.S. Army Reserve.

In 1935 Harrelson married Elizabeth Connor; they had no children. He was active in the civic, social, and religious life of Raleigh and was a member of a number of honorary, professional, and social fraternities. He died while preparing to take part in ceremonies dedicating North Carolina State's new library, and was buried in Oakwood Cemetery, Raleigh.

On 7 Mar. 1962, North Carolina State dedicated Harrelson Hall to honor the memory of its former chancellor. The unique, round classroom building has joined the Memorial Tower as one of the familiar landmarks on the State campus. By the terms of his will, Harrelson's entire estate was to be given to North Carolina State upon the death of his wife. The will stipulated that "all property, securities, bonds and monies" were to be properly invested and that a portion of the income was to be used by the university for lectures, books, works of art, and appropriate markers for buildings named for individuals. The Harrelson Lectures series was inaugurated on 7 Mar. 1962, with the U.S. ambassador to the United Nations, Adlai E. Stevenson, as speaker.