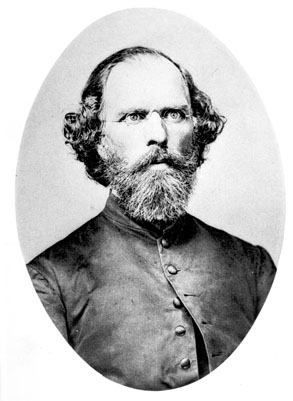 Horace James, minister, Union Army chaplain, and Freedmen's Bureau officer, was born in Medford, Mass., the son of Galen C. James of Medford and his wife Mary R. Turner of Scituate, Mass. He was graduated from Yale University in 1840 and was ordained a Congregational minister; he did further study of theology at Andover. In 1843 he married Helen Leavitt in Medford, and they moved to Wrentham, Mass., where he became pastor of the Wrentham Original Congregational Church. Their son and only child, Horace Melville James, was born on 28 Mar. 1846.

In February 1853 James became the pastor of Old South Congregational Church in Worcester, where he served until after the outbreak of the Civil War. Like many New Englanders before the war, he regarded slavery as immoral and was adamant that it should not spread to the U.S. territories acquired during the Mexican War. In 1854 he spoke against the Kansas-Nebraska Bill at a mass meeting in Worcester. Two years later he publically condemned the beating of abolitionist Senator Charles Sumner by proslavery Congressman Preston S. Brooks of South Carolina. He also delivered antislavery sermons from the pulpit.

Despite his attack on the "peculiar institution" James was not an abolitionist, defined by historian James M. McPherson as one of "those Americans who before the Civil War had agitated for immediate, unconditional, and universal abolition of slavery in the United States." Rather, he felt that slavery should be abolished gradually and with compensation to slave owners. When the Civil War began, James, like Abraham Lincoln, considered the goal of the federal war effort to be the restoration of the Union without the immediate abolition of slavery in the South.

In October 1861 James joined the Twenty-fifth Massachusetts Infantry Regiment as a Union Army chaplain. He accompanied the regiment to Fortress Monroe, Va., where Major Benjamin F. Butler placed him in charge of supervising the care and employment of the many "contrabands" or escaped slaves who fled to Union lines. In February 1862 James's regiment participated in the expedition led by Major General Ambrose Burnside that captured Roanoke Island, N.C. Burnside appointed him officer-in-charge of the contrabands who sought federal protection on the island.

When the Twenty-fifth Massachusetts was part of the force that captured New Bern in March, James went to the town. Working under the federal-appointed superintendent of the poor, Vincent Colyer, he assisted black and white refugees who arrived in New Bern and other points held by the Union Army in coastal North Carolina. Colyer was a former Northern YMCA official. James also established evening schools for blacks in New Bern, gave them religious instruction, and solicited food and clothing from Northern philanthropic organizations on his own initiative. By this time, and as a result of his experience with escaped slaves in Virginia, James changed his mind about the gradual, compensated abolition of slavery. He now believed that the eradication of slavery should be part of the Union's war aims, although he still did not consider blacks to be the biological and intellectual equals of whites.

When Vincent Colyer left North Carolina in November 1862, Major General John G. Foster, Burnside's successor, appointed army chaplain James Means to Colyer's post as superintendent of the poor. Means, however, soon died of yellow fever, and in January 1863 Foster named James to the office, which was now called the superintendent of Negro affairs. James had greater responsibility and a more lasting impact on the former slaves who came under his supervision than either of his predecessors. At the time of his appointment, the U.S. government was beginning to allocate more of its resources to the relief of blacks and destitute whites in the South. (This effort eventually led to the creation of the Bureau of Refugees, Freedmen, and Abandoned Lands in March 1865.)

As superintendent of Negro affairs, James was responsible for taking censuses of black refugees in eastern North Carolina and for finding them employment. He also issued rations, medicine, and clothing to destitute freedmen within federal lines, who had been officially liberated by the Emancipation Proclamation issued in January 1863, and he had to supervise the contracts of former slaves with whites. Assisted by New England philanthropic institutions, he established many schools for blacks in Union-held North Carolina. He also gave aid to white refugees.

To furnish the many freedmen with places to live as well as to provide consolidated points from which to implement his programs for assisting them in their transition from slavery to freedom, James created a number of refugee camps on land that had been abandoned by its owners or seized by the U.S. Army. At the camps he hoped to feed and shelter black families until they could become self-sufficient through the programs he planned to establish. These included basic education, vocational education, and the formation of small industries to utilize black labor.

In early 1863 James established the first camp at Roanoke Island, which served as a model for future black colonies. He set up smaller camps at other places in coastal North Carolina including Beaufort, Washington, and Plymouth. At New Bern, he created three camps but in 1864 combined these into the one located inside the federal fortifications and therefore protected from Confederate attack. This camp was just across the Trent River, south of New Bern. Army officers called it the Trent River Camp or the Trent River Settlement, but in 1865 it also came to be called James City in honor of its founder. During Reconstruction the federal government broke up the freedmen camps and restored the land to the original owners. The residents of James City, however, obtained leases from the owners of their tracts and managed to keep their community intact. (Many of the descendants of the original settlers still live in the vicinity of the original camp in a black community known as James City.)

In 1864, James was discharged as chaplain of the Twenty-fifth Massachusetts Infantry and immediately commissioned a captain and assistant quartermaster of U.S. Volunteers, keeping his position as superintendent of Negro affairs. In March Congress established the Bureau of Refugees, Freedmen, and Abandoned Lands to which passed the responsibility for providing aid to destitute blacks and whites throughout the South. Secretary of War Edwin M. Stanton selected Major General Oliver Otis Howard as commissioner of this federal agency known as the Freedmen's Bureau. With the creation of the bureau James became the assistant commissioner for North Carolina, an office he held for only a short time. He soon asked to be relieved of his duties because of a concern for his family's health (and possibly his own), a strong desire to return to the pulpit full time, and a belief that it would not be long before the federal government abolished the Freedmen's Bureau.

To take James's place General Howard appointed Brevet Brigadier General Eliphalet Whittlesey, a member of Howard's staff. Whittlesey arrived from Washington and established a headquarters in Raleigh in July 1865; he then divided the state into districts to be served by the bureau. At his insistence, James agreed to remain for a short time as subassistant commissioner for the eastern district and to lend his experience in dealing with the freedmen. Whittlesey also appointed him financial agent for the bureau in North Carolina.

James remained as head of the eastern district until December 1865, when Howard finally accepted his resignation. After leaving the Freedmen's Bureau he entered into a plantation and labor scheme in Pitt County. In the enterprise he was the partner of Whittlesey and Winthrop Tappan, a neighbor of Whittlesey in the state of Maine. The plan conceived by Whittlesey and Tappan and presented to James called for the two men from Maine to rent two plantations in Pitt County from the owner, William Grimes. The plantations, named Avon and Yankee Hall, were located about twelve miles from Washington on opposite sides of the Tar River. James received money for expenses and had complete charge of the farms, including hiring and supervising freedmen as laborers and purchasing supplies. On each of the sites he established schools and churches for the freedmen. In overseeing the laborers employed on the plantations, James acted as a civilian agent for the Freedmen's Bureau; he received no salary, but if the project produced a profit he was to share in it equally with his partners.

In the summer of 1866, a black laborer was killed on one of the plantations. In September a military court tried James as an accomplice in the shooting and for allegedly exploiting the freedmen in the profit-making venture. The court also tried Whittlesey for using his position as head of the Freedmen's Bureau in the state to exploit freedmen labor and for not reporting the Pitt County shooting to headquarters in Washington. Both men were acquitted. Whittlesey soon left the state and rejoined Howard's staff in Washington, D.C.

James continued to run the plantations until a crop failure in 1867 led to the venture's termination, after which the land was returned to the owner. James returned to Massachusetts in the same year and took charge of a parish in Lowell, serving also as associate editor of the Congregationalist, a church publication. He then traveled abroad. While visiting Palestine, he contracted a severe cold that resulted in consumption and ultimately his death in Worcester, Mass. He was survived by his wife and son.

Vincent Colyer, Report of the Services Rendered by the Freed People to the United States Army in North Carolina in the Spring of 1862, After the Battle of New Bern (1864).

Horace James, Annual Report of the Superintendent of Negro Affairs in North Carolina, 1864: History and Management of the Freedmen in This Department up to June 1st, 1865 (n.d.).

Massachusetts Soldiers, Sailors, and Marines in the Civil War (1932).

Our Duties to the Slave: A Sermon Preached Before the Original Congregational Church and Society in Wrentham, Massachusetts, on Thanksgiving Day, November 28, 1846 (1847).

Samuel H. Putnam, The Story of Company A, Twenty-Fifth Regiment [of] Massachusetts Volunteers in the War of the Rebellion (1886).

Trial of Rev. Horace James, Before a Special Military Commission, Convened by Direction of Andrew Johnson, President of the United States in September, 1866 (n.d.).