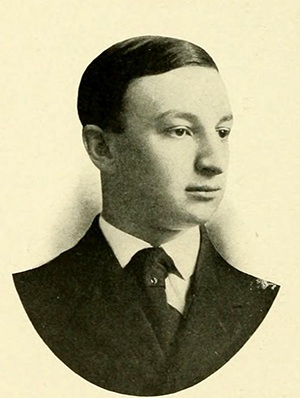 Edwin Bedford Jeffress, Sr., journalist, was born in Canton, the son of Charles James and Maria Love Osborne Jeffress. He obtained his elementary and secondary education in the public schools of Haywood County, for a short period in Salisbury, and then at the Asheville High School where he was graduated in 1903. That fall he entered The University of North Carolina and distinguished himself as a student, earning a Phi Beta Kappa key for scholarship and an Omicron Delta Kappa key for leadership. During the last two years he was an assistant instructor in geology. In 1907 he received the bachelor of arts degree, with a major in general science.

The summer after graduation Jeffress edited the Canton Observer, and, although he had planned to make a career of teaching science, the first "printer's ink on his hands" later determined his profession. From 1907 to 1909 he taught at the Bingham Military School in Asheville, but spent his vacations working as a reporter for the Asheville Gazette News, beginning a long association with that brilliant journalist of the turn of the century, W. A. Hildebrand. In the summer of 1909, he resigned his teaching post to become a full-time staff member of Hildebrand's paper. Two years later the Asheville publisher acquired the Greensboro Daily News. Jeffress is believed to have been the first newspaperman to become a staff correspondent in the state capital, where he wrote special dispatches for both the Asheville and Greensboro papers.

In late 1911, Jeffress purchased (apparently from Hildebrand) a half interest in the Greensboro Daily News and assumed the role of business manager. Soon afterwards he became secretary-treasurer of the Greensboro News Company. When Hildebrand sold his part ownership of the Greensboro paper to his employees (many of whom had followed him from Asheville to Greensboro) in 1918, Jeffress became president, succeeding his longtime friend and mentor.

The growth in circulation and influence of the Greensboro Daily News, and later its afternoon counterpart, the Greensboro Record, was largely attributed to Jeffress, who for the next sixteen years was a dynamo of energy and accomplishment. In 1934, he became seriously ill; subsequent brain surgery resulted in a general incapacitation until his death in 1961. Although he experienced some difficulty in getting around, he remained alert, a ready conversationalist, and a perennial student, having returned to Chapel Hill where he lived out his days at the Carolina Inn among the academic and cultural offerings of his beloved University of North Carolina.

During the twenty-three years he was active, Jeffress demonstrated a deep interest in everything that concerned the growth and development of Greensboro. From the first he was an energetic member of the Chamber of Commerce, serving as president for two terms (1921–22). His leadership in that group and related activities won for him the Civitan Club's Outstanding Citizen Award. He was the logical choice for election to the city council, and, as mayor of Greensboro from 1925 to 1929, he did much to enhance that city. Notable among his achievements was his part in the establishment of the Greensboro-High Point Airport. He was also founder and president of the Greensboro Community Chest.

Elected to the North Carolina General Assembly, Jeffress proved to be an effective legislator in the 1931 session—particularly in his fine service through the Commission to Study the Prison Situation in North Carolina. The same year the governor appointed him to the State Highway Commission, of which he was chairman for two years. In the reorganization of 1933, which produced the North Carolina State Highway and Public Works Commission, including the State Prison System, he was named chairman for a four-year term; however, his tenure was cut short by his illness less than a year after he assumed the expanded office. Capus Waynick, writing about North Carolina roads and road builders, paid high tribute to the constructive and innovative leadership Jeffress provided in the few years of service he gave the state in the interest of improved highways.

Through his active years, he was a member of the American Newspaper Publishers Association, the Southern Newspaper Publishers Association, the North Carolina Press Association, and the National Press Club in Washington, D.C. One of his auxiliary business ventures was the North State Engraving Company, of which he was president and a longtime director. He was also a director of the King Cotton Hotel Company. For a number of years he was a director of the Alumni Association of The University of North Carolina. Other memberships included Kiwanis International, the Merchants and Manufacturers Club, the Greensboro Country Club, and various fraternal organizations: Ancient, Free, and Accepted Masons (Knight Templar, 32nd degree Mason, and the Shrine), Knights of Pythias, and Benevolent and Protective Order of Elks.

Jeffress's life in Chapel Hill for most of his last twenty-seven years was a saga of individualism. Susan Quinn wrote in The Daily Tar Heel, "E. B. Jeffress is back, complete with cane, a battered gray felt hat that got a smudge on its crown when it blew across the street in Salt Lake City, Utah, and an opinion on almost any subject anyone wishes to discuss." He was an inveterate traveler by bus, once making an 8,500-mile trip across the continent, averaging 300 miles a day, and returning with an alert observation of the highways, the people, and the places he had seen.

In 1955 Jeffress was honored by his hometown with a testimonial dinner for his multiple contributions to the city and the state. The Greensboro Chamber of Commerce staged the affair, attended by a large contingent of dignitaries headed by Governor Luther H. Hodges. A month after his death, the Tompkins Knob on the Blue Ridge Parkway was renamed E. B. Jeffress Memorial Park in honor of the man who as much as any other contributed to that great highway for North Carolina.

I have two 18-inch rulers

I have two 18-inch rulers with inches on one side and picas on the back... They say North State Engraving Co., In the center of North Carolina, Daily News Building, Greensboro, NC Photo Engraving, Phone #BR3861. Half Tone, Zinc Etching Newspaper Illustrating. Designing, Commercial Art, Printing Plates for All Purposes. Does anyone there (or anywhere) want them?

This is the best, most

This is the best, most concise biography of mr grandfather I have ever read. I shared it with my mother today as I discovered it while trying to find out whether he was a member of the Di-Phi and if so which one.

Thank you for visiting NCpedia and letting us know!  I'm glad you enjoyed the entry.

At the bottom where you list the children you have my grandfather listed at Edward Jr and it should be Edwin Jr. The hyperlink does take you to the right location of his obituary.

Thank you for visiting NCpedia and letting us know about this correction!