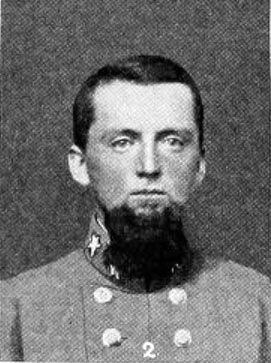 John Calhoun Lamb, businessman, Confederate regimental officer, and a war casualty, was born in Camden County, the oldest child of Wilson Gray and Eliza Williams Lamb. His paternal grandparents, Mary and Gideon Lamb were cousins; Gideon, a former state senator, was the son of Luke Lamb who was a brother of Gideon Lamb, a colonel in the Revolution. After his schooling at the academy near his home in Elizabeth City, John Lamb acquired a hotel in Williamston and established a merchandising business which included West India trade. Several of his vessels were captured by Federal forces during the early part of the Civil War.

When Roanoke Island fell, Lamb enlisted with his father and two of his brothers, Wilson Gray, Jr., and Gideon; the father soon contracted rheumatism from exposure and was sent home, an invalid for the rest of his life. The younger Wilson Gray remained in the army for the entire war, attaining the rank of second lieutenant. Forty years after enlisting with his kinsmen, Wilson wrote the chapter on the Seventeenth Regiment (first called the Seventh Volunteers) for Walter Clark's Histories of the Several Regiments and Battalions. He recorded much of his brother John's military career from personal observation or knowledge, including the battle where the "brave and youthful Lieutenant Colonel Lamb fell mortally wounded upon the enemy's works and died a few days therafter."

John C. Lamb rose rapidly in the army. He helped organize the Roanoke Guards as the first company in Martin County, and ten days before the state passed the ordinance of secession, he was commissioned captain. His company, a part of the Seventh Regiment of North Carolina Volunteers, was mustered into service as Company F, Seventeenth Regiment, North Carolina Troops, at Hatteras Inlet on 26 July 1861 and was stationed at Fort Clark with Captain Lamb in command. One mile away, Fort Hatteras under Colonel W. F. Martin completed the defenses of the inlet, with fewer than a thousand men in the two forts; when attacked in late August by seven war vessels and the land forces of the U.S. fleet, both forts fell. The entire regiment was taken first to Fort Columbus, New York Harbor, and then to Fort Warren, Boston Harbor, for imprisonment. Some of Lamb's less unhappy experiences at Fort Warren are reflected in mementos preserved by his family, including an autograph book with the names and addresses of about 135 fellow prisoners from fourteen states and Canada.

Lamb was paroled near the end of January 1862, transferred for an official exchange of prisoners on 20 February, and mustered out of service with his company at Williamston a month later. Early in May, he and some of his men reported to Camp Mangum, about three miles west of downtown Raleigh, for the reorganization of the Seventeenth Regiment; on 16 May he was appointed captain of Company A and then named lieutenant colonel. By the end of the year, Lamb was in command of the force that made the first attack on Plymouth at the mouth of the Roanoke River on Albe-marle Sound. His troops captured and destroyed the town without losing a single Confederate. The records of the succeeding twenty-four months include his regiment's capture of the forts and all the artillery at Newport Barracks near Morehead City in February 1864, as well as the costly but successful assault in May at Bermuda Hundred in Virginia where Lamb was mortally wounded. He died one week after entering the North Carolina room at the officer's hospital in Petersburg, Va. His remains were taken home for burial in Williamston, where he had been a vestryman in the Episcopal Church of the Advent. He never married.