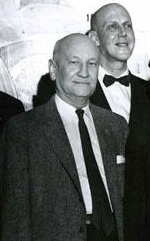 McDaniel Lewis, investment banker, civic leader, and supporter of various cultural and historical projects, was born in Asheville. Shortly after his birth, his parents, Elisha Betts and Dora McDaniel Lewis, moved to Kinston where he spent his childhood. Lewis was a direct descendant of two men who played significant roles in North Carolina's Revolutionary War effort—Exum Lewis, colonel of the Edgecombe County militia, and Elisha Battle, a representative in the Assembly and in the Provincial Congress during the 1770s and a delegate to the state's constitutional convention of 1788.

Lewis left Kinston in 1912 and enrolled at The University of North Carolina. As a student he participated in a wide range of activities including varsity baseball, the Philanthropic Society, publications (associate editor of the Yackety-Yack and The Tar Heel ), and Alpha Tau Omega fraternity. An avid photographer, Lewis earned the nickname "Kodak Mac" and was seldom seen on campus without a camera.

After graduation in 1916, he taught and coached at the Raleigh High School for a year before moving to Greensboro where he began his career as an investment banker. In 1931 he founded the partnership of Lewis and Hall, and in 1941 he established the firm of McDaniel Lewis and Company, which specialized in municipal bonds. Near the end of his life, he served as a consultant to a Greensboro investment firm and was believed to be the oldest active investment banker in North Carolina.

From 1947 to 1965 Lewis was affiliated with the North Carolina Department of Archives and History. While serving for twelve years as executive board chairman, he helped to develop plans for the North Carolina Civil War Centennial (1961–65) and for the celebration of the Tercentenary of the Carolina Charter (1963). Greensboro, Lewis's adopted hometown, was the beneficiary of many of his civic efforts. He was a charter member, secretary, and later president of the Greensboro Historical Museum. Lewis chaired the committee that developed the plans for the Greensboro Coliseum complex. As a result of his association with dozens of historical and patriotic societies in and around Greensboro, the Greensboro Chamber of Commerce presented him with the Dolley Madison Award in 1972 for outstanding contributions to historic preservation.

Lewis was outspoken on many issues and worked hard to sway public opinion to his side. He was the state's foremost advocate of a downtown Raleigh site for the North Carolina Museum of Art, but despite his objections the General Assembly decided on a location outside the city. He met with more success in his efforts to have the Guilford Courthouse Battleground park enlarged, to place the Greensboro Coliseum in an effective location, and to preserve the historical integrity of the area where David Caldwell's Log College once stood.

A lifelong Baptist and Democrat, Lewis was also a member of the American Legion, Masons, and Woodmen of the World. He served as a trustee of Chowan College (1957–61 and 1963–67) and was a charter member of the Educational Foundation at The University of North Carolina, remaining active in civic and business affairs until his death.

Lewis was survived by his wife, the former Lillian King Kimbrough of Greensboro, and two children from his first marriage to Lynwood Adams Cools of Danville, Va.: Margaret Betts Beard and Mary Lynn Johnson. He was buried in Forest Lawn Cemetery, Greensboro.