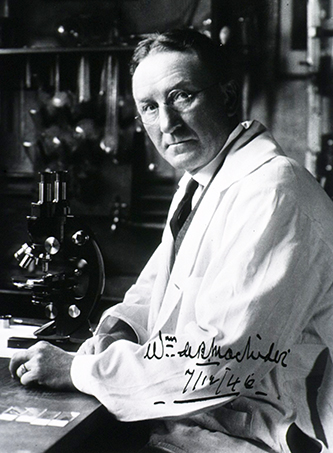 William de Berniere MacNider, physician, pharmacologist, and medical educator, was born in Chapel Hill, the son of Virginius St. Clair and Sophia Beatty Mallett MacNider. Both his father and his grandfather were physicians. In 1898 MacNider enrolled in The University of North Carolina, where he was graduated in the first class of the medical school with a doctor of medicine degree in 1903. Returning from special medical studies at the University of Chicago and Case Western Reserve, he resumed his lifelong association with the university in Chapel Hill, where he had served as assistant in biology (1899–1900), assistant in anatomy (1900–1902), and assistant in clinical diagnosis (1902–5).

In 1905 MacNider organized the university's first Department of Pharmacology, where he served as professor from 1905 to 1918, Kenan Professor in 1918, and Kenan Research Professor from 1919 until his appointment as dean of the School of Medicine in 1937, following the retirement of Charles Staples Mangum. Desiring to devote his energies to research, MacNider resigned the deanship in 1940. He served as chairman of the Pharmacology Department until 1943 and as Kenan Research Professor until his retirement as professor emeritus in 1950.

As MacNider rose to national prominence in medical research and education, his influence and activities extended well beyond the Chapel Hill campus. In addition to his work at the university, he was physician-in-chief pro tem at Peter Bent Brigham Hospital in Boston (1925), Smith-Reed-Russell Lecturer at the George Washington University School of Medicine (1938), Brown-Sequart Lecturer at the Medical College of Virginia (1938), Mayo Foundation Lecturer (1939), Harvey Society Lecturer (1928–29), special lecturer in pharmacology at Duke University Medical School, and Chandler Memorial Lecturer at Columbia University.

As a specialist in pharmacology, toxicology, and gerontology, MacNider contributed extensively to the study of human renal and hepatic diseases, both in original research publications and as associate editor of the Proceedings of the Society for Experimental Biology and Medicine, the Quarterly Journal of Alcohol Study, and the Journal of Pharmacology and Experimental Therapeutics. In recognition of his contributions to medical research, he received the Gibbs Prize for Medical Research for 1930–31 from the New York Academy of Medicine, the Research Medal of the Southern Medical Association in 1933, and the Kober Medal of the Association of American Physicians in 1941. He was awarded an honorary doctor of science degree by the Medical College of Virginia in 1933 and an honorary doctor of letters degree by Davidson College in 1934.

An active member of the Episcopal church and a Democrat, he belonged to the Cosmos Club of Washington, D.C., and the Masonic order. His hobbies included hiking, natural history, gardening, and the collecting of bronze statuary, silver, and scientific and religious books. On 23 Jan. 1918 he married Sarah Jane Foard of Davie County. They had one daughter, Sarah Foard. MacNider died in Durham and was buried in the Chapel Hill Cemetery. MacNider Hall in The University of North Carolina School of Medicine was named for him.