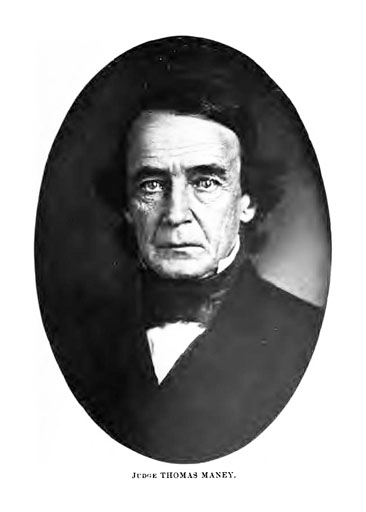 Thomas Maney, legislator and judge, was the son of James and Mary Roberts Maney of Hertford County. His own was the fourth generation of Maneys, originally Huguenot refugees of New York, who had lived in the Maney's Neck section of the county since James Maney's settlement there around 1725. James Maney III, the father of Thomas, represented the county in the General Assembly for two terms in the late eighteenth century.

Thomas Maney, after studying law with William Hardy Murfree of Murfreesboro, won election in 1817 to the state House of Commons. Following one term in office, he served briefly as secretary to Governor Jesse Franklin before settling in Murfreesboro and practicing law. In 1821 he married Mrs. Rebecca Southall Boon, a young widow. They had two daughters, Betty and Annie; a third child died in infancy in 1825. Maney was active in the civic affairs of Murfreesboro as trustee of the boy's academy, militia officer, and town commissioner. In February 1825 his fellow townsmen appointed him to the committee on arrangements for entertaining the Marquis de Lafayette during his southern tour. Maney also delivered the welcoming address when the general arrived in Murfreesboro, his first stop in North Carolina.

By the close of 1825, when the legislature appointed him to the Council of State, Maney had already decided to leave North Carolina and may not have been confirmed in office. He moved with his family in 1826 to Franklin, Tenn. In 1839 he was elected to a judgeship on the state's superior court, soon moving to Nashville in order to be at the center of his judicial district. An outstanding lawyer and capable jurist, Maney retired after serving as circuit judge for the better part of two decades. He died in Nashville late in the Civil War.