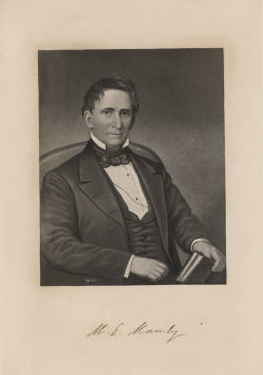 Matthias Evans Manly, lawyer and jurist, was born near Pittsboro, the third of six children of Basil and Elizabeth Maultsby Manly, who had moved to Chatham County from Bladen. His father, originally from St. Marys County, Md., and a Roman Catholic, became a captain of militia during the American Revolution. His mother was of the fourth generation of Quaker settlers of Bladen, but Matthias, unlike his older brothers Charles and Basil, adhered to the religious affiliation of his father.

He received his early education at the Bingham School in Orange County and was graduated with honors from The University of North Carolina in 1824. Five years later he received an M.A. degree, and in 1862 the university awarded him the honorary degree of LL.D. For a while after graduation Manly tutored mathematics at the university, then studied law under his brother Charles. He later settled in New Bern and became a successful lawyer.

In 1834 and 1835 Manly served in the legislature, and in 1840 the governor appointed him a superior court judge to complete the term of Judge R. M. Saunders, who had resigned. When the legislature met the following year, he was elected to that position, which he held for the next nineteen years.

In December 1859 he was appointed to the North Carolina Supreme Court and served for six years. As a judge Manly had always been known for his impartiality and, of his first four opinions as a supreme court justice, which were on appeals in cases he had tried as a superior court judge, he reversed himself in two. During the Civil War there was not much litigation so he had no great opportunities to express himself as a writer of judicial opinions. When the habeas corpus cases were before the court in 1863, he was absent on account of illness and did not participate in those decisions, but in 1864 he was present for the cases involving the power of the Confederate government. He held that the government, in its struggle for independence, had a right to the services of all its citizens, an opinion that often put him in the position of dissenter on the court, differing as he did with those who sought to limit that power.

In the turbulent political atmosphere that prevailed after the war, when Secessionists were denounced as traitors, he was one of the few former supporters of the Confederacy to be elected to the constitutional convention of 1865. At that convention an ordinance was introduced declaring that the ordinance of 1789, by which the state had become a member of the Union, had always been in force, notwithstanding the "supposed ordinance of 1861," that of secession. Manly supported a substitute that annulled and repealed the 1861 ordinance. His view, which was not supported by the majority of the convention, was that it was "uncandid in us now to say that we were . . . put into a position of hostility to the Government of the United States without our privity or consent." He insisted that the action of the 1861 convention was not a nullity but had failed because it had been overthrown by force of arms, and that decency and candor therefore required that it be repealed rather than declared a nullity.

A correspondent of the Boston Advertiser, Sidney Andrews, who attended the convention, characterized Manly as "perhaps the leading Calhoun man of the State, as he is certainly the only member of the convention who has courage and frankness enough to openly avow his belief in the doctrine of State rights." Andrews also gave a graphic description of his physical appearance at that time: "Mr. Manly is a tall, spare man . . . with a noticeably long, thin face, much cut up with fine wrinkles. He has a firm mouth, thin Roman nose, and square forehead, almost covered with reddish-gray hair, which falls from above and is combed up from the sides . . . Having seen him even but once, you could never forget his eyes—small, steelly, restless, incisive, half closed, set far back under jutting frontals—eyes that at first glance seem to see nothing, but that unquestionably do see everything."

The convention declared all state offices vacant and the General Assembly of 1865 elected a new supreme court, which did not include Manly. In 1866, however, he was elected to represent Craven County in the state senate, of which he was voted president. At that session he was elected by the General Assembly to the U.S. Senate, winning by a large majority over the incumbent, John H. Pool. But when the state was denied representation in Congress, he was not permitted to take his seat in the Senate.

Afterwards Manly resumed his law practice in New Bern and served as presiding justice of Craven County until the county court system was abolished in 1868. He also became mayor of New Bern and represented the state as its proxy in the Atlantic and North Carolina Railroad.

In June 1881 he fell at his residence; a month later he suffered a fatal stroke of paralysis and was buried in Cedar Grove Cemetery, New Bern. A portrait of Judge Manly hangs in the supreme court building in Raleigh.

In 1832 Manly married Hannah Gaston, the daughter of Judge William Gaston, by whom he had two daughters: Jane and Hannah. After her death he married, in 1844, Sarah Louisa Simpson, the daughter of Samuel Simpson, of New Bern, and they had nine children: Matthias Evans, Jr., Maria, Elizabeth, Gaston, Basil, Clement, Mary, William, and Sarah Simpson.