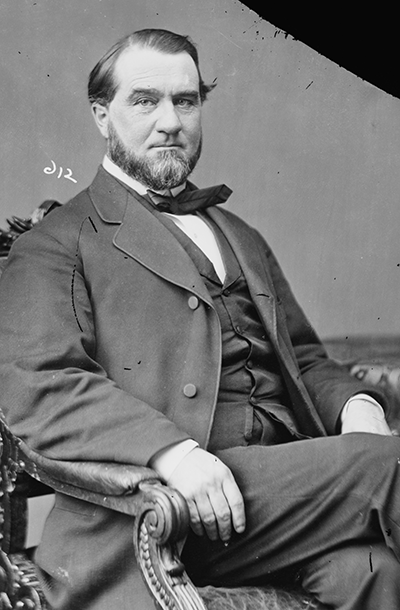 John Pool, U.S. senator, was born on a plantation near Elizabeth City, the son of Solomon and Martha Gaskins Pool. After receiving his early education at home, he entered The University of North Carolina, where he was graduated with honors in 1847. In the same year he was admitted to the bar and put out his shingle in Elizabeth City. Although he practiced law for a livelihood, he preferred public life and politics.

A Whig since his boyhood, Pool won election to the state senate in 1856 and reelection in 1858. In 1860 North Carolina Whigs, calling themselves the Opposition party since the national Whig party had been dissolved by the slavery issue, nominated Pool for governor on a platform of union and an end to sectional agitation. But political emotions were high in this, the year of the election of a "Black Republican" to the presidency. Despite a vigorous campaign by Pool, whose ability in debate was impressive, he lost the election to John W. Ellis, the Southern Rights candidate, by a mere six thousand votes. After the election of Abraham Lincoln, Pool worked to prevent the secession of the state from the Union; when North Carolina finally seceded in May 1861, he quietly retired to his plantation, determined not to take part in any way in the Civil War.

When the peace movement flowered under William W. Holden's leadership in 1864, Pool, having moved to Bertie County, reentered politics and won election to the state senate on a platform seeking separate-state action to end the war. He quickly emerged as the leading peace advocate in the General Assembly, and in late 1864 he introduced a set of resolutions to end immediately the state's participation in the war. These resolutions, however, failed at passage.

After the war Pool served in the convention of 1865, which had been called as a prerequisite for the restoration of the state to the Union under President Andrew Johnson's plan of Reconstruction. Because of his prominence as a conservative Unionist during the war, he was sent to the U.S. Senate by the Whig-dominated General Assembly elected in late 1865. He never took his seat in the Senate, since Congress rejected all of the Southern representatives chosen under Johnson's scheme of Reconstruction. Already Pool had soured on the president's diluted brand of Unionism, which seemed to him to be a sellout to former "rebels."

After the tide turned against the president's conservative reconstruction policy in the North, Pool, along with Holden and three other anti-Johnson men, visited Washington in December 1866 and conferred with Radical leader Thaddeus Stevens on Reconstruction affairs. Impressed by the power of Congress and its determination to impose black suffrage on the former Confederate states, Pool and Holden rushed home to organize a state Republican party, based on support for Congress, before outsiders gained control of the new voters for radical or corrupt purposes. In joining the Republican party he admitted that in part he was motivated by a fear that estates would be confiscated, either directly or indirectly through taxation, and divided among the blacks unless conservative Unionists like himself accepted the political changes demanded by Congress and controlled the course of reconstruction in the state. Although his efforts to set the fledgling Republican party on a conservative course failed, he campaigned in 1868 for the Holden ticket and the ratification of the so-called black-and-tan constitution. After the Republicans swept to victory in the election, the General Assembly selected him again for the U.S. Senate. He was seated and served in that body until 4 Mar. 1873.

In the Senate Pool took a leading role in securing legislation to suppress Ku Klux Klan terror in the South. He also worked for the removal of the Fourteenth Amendment disabilities that had been imposed on selected former Confederates. At home he used his influence to obtain the passage of the Shoffner bill, empowering the governor (in this case, Holden) to declare any Klan-infested county in a state of insurrection and to employ the militia to suppress terrorist groups. When Klan activity became intense in Alamance and Caswell counties in 1870, Governor Holden met on 8 June with leading North Carolina Republicans to seek advice on the implementation of the Shoffner Act. At this meeting Pool advocated stern measures against the Klan, specifically recommending that selected state troops be dispatched immediately to the afflicted counties with orders to suppress the terrorists without regard to court proceedings. He allegedly recommended (a charge he later denied) that the governor should form military commissions, as had been done successfully in Arkansas, to try arrested Klansmen.

Holden accepted Pool's advice, although he later abandoned the plan of holding military trials. As it turned out, the implementation of the senator's program of action against the Klan resulted in the Kirk-Holden war and the governor's impeachment and removal from office. In the wake of this political upheaval, the state senate appointed a committee to inquire into Pool's conduct in the episode. After a brief investigation the committee reported that he was guilty of misconduct in the affair. But the dominant conservatives in the senate, realizing that the passage of a resolution censuring Pool would make them open to charges of partisanship, permitted the committee's report to die a silent death.

In a surprisingly close vote in the General Assembly, Pool failed to be reelected to the U.S. Senate in 1873. However, he remained in Washington to practice law, only returning to North Carolina in 1876 to fill a brief appointment as superintendent of public instruction. He then moved to Washington, where he spent the rest of his life. Pool turned against the Republican party when President Rutherford B. Hayes abandoned the regular Republicans (or Unionists) in the South in an effort to obtain conservative support. In the presidential election of 1880 Pool attempted to persuade disillusioned Southern Republicans to vote for W. S. Hancock, the Democratic candidate. He died of a heart disease in Washington.

Pool was twice married, first to Narcissa Sawyer and then, upon her death, to Mary Elizabeth Mebane of Bertie County. By each wife, he was the father of a son and a daughter.