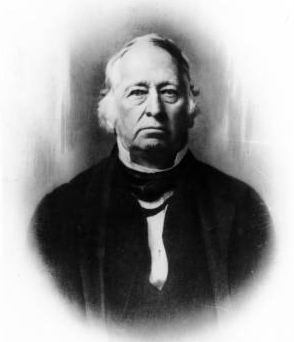 Romulus Mitchell Saunders, lawyer, legislator, congressman, and diplomat, was born near Milton, Caswell County, to William and Hannah Mitchell Saunders. His mother died while he was an infant, and Romulus was taken by his father to Sumner County, Tenn. Upon his father's death in 1803, the youngster was adopted by his uncle, James Saunders, and brought back to Caswell County. He attended Hyco and Caswell academies and in 1809 entered The University of North Carolina. The following March, however, the university's board of trustees concluded that Saunders "had fired a pistol in the College and had thrown a stone at the Faculty," and he was expelled. Nine years later he was elected to the board of trustees, where he served for forty-five years.

Following his expulsion from the university, young Saunders moved back to Tennessee and read law under Hugh Lawson White. After his admission to the bar in Nashville in 1812, he again returned to Caswell County and in 1815, at age twenty-four, was elected to the North Carolina House of Commons. The next year he served in the state senate, then returned to the house for the sessions of 1818–20; in the last two years he was elected speaker. As a member of the U.S. House of Representatives in the Seventeenth through Nineteenth congresses (1821–27), Saunders earned a reputation as an acidtongued partisan of the states' rights faction, which supported William H. Crawford for the presidency in 1824. John Quincy Adams, the victor in the election, later said of him, "There is not a more cankered or venomous reptile in the country." Saunders, an admirer of Nathaniel Macon, was a fiscal conservative, observing that "men in power are apt to think that the peoples' money is intended to be expended in such way as their distempered fancy may support." He was, however, a supporter of internal improvements.

In 1828 he declined to run for reelection, but in the same year he accepted the position of state attorney general and held it until the post was declared vacant in 1834 because he had, since 1833, been serving a presidential appointment on the French spoliations claims commission, thus violating a state law against duel office-holding.

Saunders became a judge of the superior court in 1835 and rode the circuit until 1840, when he accepted the Democratic nomination for governor. A memorable campaign followed, featuring for the first time a statewide joint canvass by the candidates. Despite Saunders's popularity as a rough-and-tumble stump orator, he was defeated by John Motley Morehead, the Whig candidate. Saunders, by then a resident of Raleigh, ran for and was again elected to the U.S. House of Representatives, serving in the Twenty-seventh and Twenty-eighth congresses (1841–45).

During the period of Whig ascendancy in North Carolina, the Democrats divided into factions. Saunders was a leader of the more extreme states' rights faction that generally followed John C. Calhoun; another native of Caswell, Bedford Brown, who had served in the U.S. Senate (1834–40), was a leader of the more moderate faction that sought not to further inflame sectional passions. Brown had resigned in 1840 rather than follow the instructions of the Whig-controlled legislature, and when the Democrats regained control of the General Assembly in 1842, he sought to regain his seat in the Senate. Romulus Saunders stood in his way, and in a bitter contest that lasted for a month, neither Brown nor Saunders could gain a majority. Finally, both withdrew and the position went to William H. Haywood of Wake County.

Saunders, retaining his seat in the House of Representatives, now became even more outspoken against the Van Buren faction of the Democratic party to which Brown belonged. In order to block Martin Van Buren and to prevent the nomination of any candidate who opposed the annexation of Texas, Saunders in the Democratic National Convention of 1844 successfully sponsored a resolution requiring a two-thirds vote of the convention for the selection of a presidential candidate. This action effectively eliminated Van Buren, and James Knox Polk, a native of North Carolina, was nominated and subsequently elected. Perhaps in appreciation for that assistance, Polk in 1846 appointed Saunders to the post of minister plenipotentiary to Spain. A secret temporary agreement was negotiated under which Spain offered to sell Cuba to the United States, but because of premature publicity, the negotiations came to naught and Saunders resigned in 1849.

Returning to Raleigh, Saunders in 1850 was elected from Wake County to the House of Commons, where he served through 1853. He was a strong supporter of the construction of the North Carolina Railroad and the strengthening of the older lines. In 1852 he lost his bid for the U.S. Senate but was elected instead to a judgeship on the superior court, a position he held until the end of the Civil War. From 1852 to 1854 he was also a member of the North Carolina Code Commission.

Saunders married Rebecca Peine Carter on 27 Dec. 1812, and they had five children—James, Franklin, Camillus, Anne Peine, and Rebecca. After his first wife's death, he married, on 26 May 1823, Anne Heyes Johnson, the daughter of William Johnson, an associate justice of the U.S. Supreme Court, and they had at least four children—William Johnson, Margaret Madeline, Jane Claudia, and Julia A. About 1831 Saunders purchased Elmwood, a handsome residence in Raleigh built about 1813 by Chief Justice John Louis Taylor. He was living there at the time of his death and was buried in the Old City Cemetery.

Romulus Saunders was a man of considerable ability and talent, but he was rough-hewn in his appearance and speech, often intemperate in his statements, and intensely partisan in his associations. He was popular among the rank-and-file Democrats, but his inveterate pursuit of public office eventually diminished his influence among party leaders.

Information about Saunders from the Caswell County Historical Association: http://ncccha.org/biographies

Information about Saunders in the History, Art & Archives of the House of Representatives: http://history.house.gov/People/Listing/S/SAUNDERS,-Romulus-Mitchell-%28S000078%29//romulussaunders.html