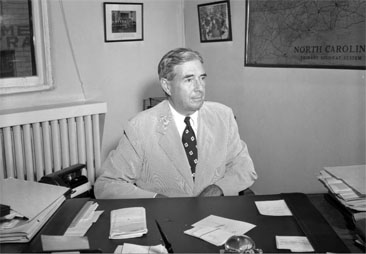 James Gore King McClure, Jr., Presbyterian minister and president of the Farmers Federation Cooperative, was born in Lake Forest, Ill. His ancestors came to the United States in 1801 from County Armagh, Ireland, where they had earlier fled to avoid persecution in Scotland. His father, James Gore King McClure, served for twenty-five years as pastor of the Lake Forest Presbyterian Church and intermittently as president of Lake Forest College; from 1905 to 1929 he served as the first president of McCormick Theological Seminary in Chicago.

Young McClure was educated at Lake Forest Academy, graduating at age fifteen. Believing he was too young to enter college, his father arranged for him to spend a year on the XIT Ranch in the Texas Panhandle, where he established a reputation as an expert bronc buster. He subsequently returned east and entered Yale University, where he was graduated in 1906. Afterwards he studied theology for a year at New College in Edinburgh, Scotland, before earning a divinity degree from McCormick Seminary. He then served for a year as pastor of a small church in Iron River, Mich. After leaving that position for further study abroad, McClure became seriously ill and for the next three years limited his activities to traveling and working on an orange grove in Arizona.

In his study of theology, McClure had been greatly influenced by the social gospel movement. Leaders of the movement, such as Walter Rauschenbusch, sought to convince young clergymen that they should seek solutions to pressing social problems rather than strictly ministering to the "spiritual needs" of their parishioners. The social gospel movement inculcated a focus on the material difficulties faced by the poor, the oppressed, and the disadvantaged. It was characterized by a belief that only when steps were taken to alleviate those difficulties would the people oppressed by them be able to benefit fully from the spiritual aspect of Christian ministry.

In 1916 McClure married Elizabeth Skinner Cramer of Lake Forest, and they became the parents of James Gore King III and Elizabeth (Mrs. James Clarke). On their wedding trip, the couple went to Asheville, N.C. Attracted by the beauty and the healthful climate of western North Carolina, the McClures purchased the former Sherrill's Stagecoach Inn, located in Fairview Township, Buncombe County.

As they began to restore the house and operate the farm, McClure soon became aware of the harsh life and almost insurmountable obstacles faced by the farm families of the region. The largely underdeveloped transportation system, the minimal availability of mechanized equipment, the severe erosion problems created by years of improper methods of cultivation, the unavailability of markets for farm produce, and other conditions combined to make life on the mountain farm exceedingly difficult. Out of McClure's firsthand experience with these conditions grew a lifelong career dedicated to their alleviation.

In 1920 McClure and several neighboring farmers formed the Federation of Farmers of Fairview, with McClure as president. After constructing a warehouse at the nearest railroad siding, the federation began to purchase supplies in bulk and to seek better markets for its members' produce and livestock. The cooperative's rapid success attracted the attention of farmers in other sections of the county, and within the next two years, warehouses were constructed in two other communities, the name of the organization was changed to the Farmers Federation Cooperative, and a marketing department was opened in Asheville. In 1925, with a gift of $25,000 from Dr. E. W. Grove, a wealthy real estate investor in Asheville, and a matching amount raised by Asheville merchants, the federation constructed a larger marketing and storage facility in Asheville with space for its expanding central office. By that year the federation was doing more than a half-million dollars worth of business annually and had expanded to five locations. A disastrous fire in 1925 destroyed the new facility, but through the perseverance of its officers, the federation was able to replace it and to extend its operations into Rutherford and Polk counties.

Despite the enormous initial success of the federation, McClure soon realized that, given the limited financial resources of its members, the progress to be achieved through cooperative efforts alone would be limited as well. The willingness of Dr. Grove and the citizens of Asheville to support the federation's activities led him to seek other sources of outside financial assistance. In 1927, with a gift from George Vanderbilt's widow, McClure created the Farmers Federation Educational and Development Fund. Much of the fund's support came from local sources, but McClure soon took his appeal annually to cities like New York, Pittsburgh, and Detroit. There he was able to attract the backing of prominent industrial and financial leaders such as Thomas K. Watson of the International Business Machines Corporation and Henry Ford.

Drawing on the contributions to the fund, McClure embarked on an ambitious program to expand the federation's activities. An experimental sweet potato curing house was constructed in Polk County, and a poultry improvement program was initiated and carried on for many years. The federation also hired a poultry specialist to work with its members and to build both a hatchery and a poultry dressing plant. In 1930 the fund sponsored a drive to raise the capital to construct the first burley tobacco warehouse in Asheville. At the same time, the federation encouraged its members to produce burley tobacco, making available information on the cultivation and curing process and the supplies necessary for its production. Those early efforts helped lay the foundation for what became a flourishing sector of the region's agricultural economy.

During the depression, the resources of the fund enabled the federation to weather the financial crisis and, remarkably enough, to expand with warehouses and new members in Burke, Haywood, Jackson, Macon, McDowell, Cherokee, Transylvania, Caldwell, Swain, and Yancey counties. Also during the thirties, the federation established a Religious Department to develop programs for the support of the rural church. One of its most enduring programs was the Lord's Acre Plan, whereby the members of a participating church dedicated a portion of the proceeds of a particular crop to the church or joined together in raising a crop for the same purpose. Over time, this enabled thousands of small churches to strengthen both their financial and their cooperative foundations. Beginning with 6 churches, the plan expanded to more than 1,000 by 1940; by 1954 the director estimated that it was being used by over 15,000 churches, many of them in foreign countries.

With the aid of the fund, the federation also established during the 1930s a Forest Products Department to market timber for its members and to encourage members to adopt sound forestry practices. Another project resulted in the erection of a vegetable cannery in Henderson County that helped lay the base for a flourishing vegetable industry in the region.

McClure saw education of its membership as one of the primary goals of the federation. Thus, early on the federation began to publish and distribute to members a monthly newspaper, the Farmers Federation News. The paper was filled with articles about programs initiated by the fund and the federation and also contained general articles on agricultural subjects. Beginning in 1935, the federation sponsored an annual picnic in each county where it operated. These picnics were daylong affairs, regularly attracting large crowds. Music and other entertainment, provided primarily by local people, were interspersed with educational programs designed to acquaint members with the federation's activities and to impart information about progressive farming methods.

Drawing on the fund's resources and a gift from E. Parmalee Prentice of Williamstown, Mass., McClure established during the 1940s a dairy herd improvement program that helped create the base for a thriving dairy industry in the region. Dairy specialists were hired to work with the members of the cooperative, and a breeding program was developed with federation's purchase of several quality bulls. The federation also spearheaded the development in the Southeast of artificial breeding of dairy cows, operating the Southeastern Artificial Breeding Service, which served all of North Carolina and parts of other southern states. A cooperative dairy processing plant was built in the late forties to market members' production.

During the 1950s western North Carolina, like much of the rest of the nation, witnessed a rapid decline in its farm population. As more and more small farms were consolidated or abandoned, the federation's base of local support began to erode. Those who carried on McClure's work after his death in 1956 arranged to merge the federation with a larger statewide cooperative in order to adjust to the situation. A dissident group prevented this and operated the business until 1960, when it was forced into bankruptcy. The fund, which had been organized separately from the federation, was renamed the James G. K. McClure Educational and Development Fund and with a substantial endowment continued to operate, awarding scholarships to young people from the region and carrying on elements of the Lord's Acre Plan.

McClure's contributions to the region extended beyond the agricultural sector. For many years he served as chairman of the Western North Carolina Committee to support the North Carolina Symphony. He organized and served as chairman of the Buncombe County Citizens Committee for Better Schools, which initiated an ambitious program of school construction and spearheaded the consolidation of county high schools. He was chairman of the committee formed in 1949 to promote Governor W. Kerr Scott's state bond issue for improved rural roads and schools. Further, he organized separate cooperatives for the marketing of items such as hooked rugs and hand-knit sweaters that could be produced in the homes of families in the region. He also exerted every effort to attract private industry to western North Carolina as a means of diversifying its economy.

Liden, Annie Fain. "The Business of Taking the Egg and Turning it Into the Baby Chick: the Farmers' Federation in Western North Carolina" (thesis, University of North Carolina at Asheville, 2003). http://toto.lib.unca.edu/sr_papers/history_sr/srhistory_2003/liden_annie_fain.pdf (accessed October 3, 2014).