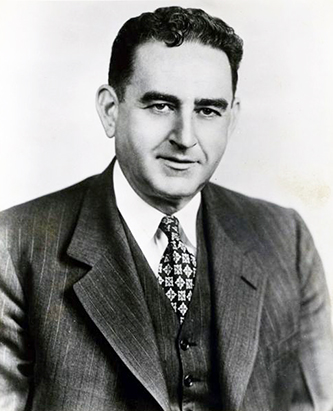 William Kerr Scott, U.S. senator, North Carolina governor, and agricultural leader, was born at Haw River in Alamance County. He was the sixth of eleven children of Robert Walter and Elizabeth Josephine Hughes Scott. A farmer by profession, his father served in the North Carolina General Assembly and was a member of the State Board of Agriculture and a trustee of North Carolina State College. His mother died when Kerr (pronounced kär) was eighteen.

Following a brief stint as emergency food production agent for the U.S. Department of Agriculture, he enlisted as a private in the U.S. Army Field Artillery. Shortly after receiving his army discharge, Scott purchased 224 acres of land near his birthplace and began a lifelong career as a farmer. In 1920 he was elected master of the North Carolina State Grange. As master, he supported rural electrification during the early days of the Great Depression. From 1934 to 1936 he served as regional director for the Farm Debt Adjustment Program, Resettlement Administration.

Scott first ran for public office in 1936, when he waged a successful campaign for the post of North Carolina commissioner of agriculture, defeating incumbent William A. Graham. Serving for three terms, he led a successful effort to rid the state of Bang's disease, an ailment afflicting cattle. In 1938 the Progressive Farmer, a leading farm journal, named Scott Man of the Year, citing his attempts to revitalize the State Department of Agriculture.

By 1948, when Scott resigned as commissioner of agriculture to seek the state's highest office, he had established a broad base of support among Tar Heel farmers. Placing second in a field of six candidates in the May Democratic primary, he requested a runoff against state treasurer Charles M. Johnson. Scott's advocacy of improved roads and his plea for ending the state's "deficit in services" resulted in his victory over Johnson in the 26 June runoff primary. In the November general election he easily defeated Republican candidate George M. Pritchard of Asheville, thus becoming the first farmer to be elected governor in the twentieth century. 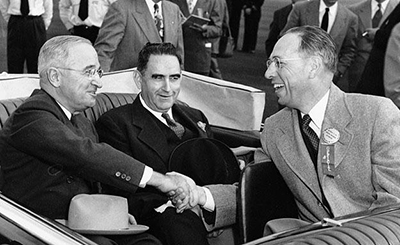 In his 6 Jan. 1949 inaugural address, Scott assigned top priority to road construction and improvement and public school construction. His effective leadership was a major factor in voter approval of a $200 million bond issue for construction of a secondary road system and a $25 million bond issue for expansion of public schools in a 4 June 1949 referendum. Both bond issues were major projects in Scott's "Go Forward" program, much of which was enacted into law by the 1949 General Assembly.

Scott's energetic leadership was directly responsible for expansion of electric and telephone service in the state's rural areas. During his term as governor 21,000 miles of power lines were strung to homes occupied by almost 150,000 people.

At a time when racial segregation was firmly embedded in the state's social fabric, Governor Scott appointed the first black man to serve on the State Board of Education, Dr. Harold Trigg, and ordered elimination of salary discrimination against staff members at the mental hospital for black people in Goldsboro. Moreover, recognizing the need to utilize the latent talents of North Carolina women, he appointed more women to state boards and commissions than any of his predecessors. Particularly significant was his selection of Miss Susie Sharp of Rockingham County as the first female superior court judge in the state's history.

Progressive measures proposed by Scott during his term included lowering the minimum voting age to eighteen, stricter enforcement of existing liquor laws and a statewide referendum on the question of liquor sales, stream pollution control, minimum wage legislation, and reinstatement of the 1947 motor vehicle inspection law repealed by the 1949 General Assembly.

When his gubernatorial term ended in January 1953, Scott returned to his Alamance farm; however, his retirement from public life lasted only a few months. A triumph over Wilmington attorney Alton Lennon in the 29 May 1954 Democratic primary assured Scott a seat in the U.S. Senate the following January. As a freshman senator, Scott spent the majority of his time listening and learning. On those few occasions when he did speak on the Senate floor, his remarks were invariably succinct. He served as a member of three Senate committees—Agriculture, Interior and Insular Affairs, and Public Works. On the latter committee he played a major role in the framing and enactment of legislation providing for financing the interstate highway network, then in its formative stage. Development of water resources and a more prosperous farm economy were goals he strove to achieve during his senatorial career.

His rural background, coupled with his daily custom of wearing a rose in his coat lapel, led one observer to describe Scott as "a jet-propelled plowboy with a rose in his lapel." During his entire public career "the Squire of Haw River," as he was affectionately called, played the political game to the hilt to accomplish goals he considered worthwhile. He knew how to trade a vote, honor a pledge, do a favor, and demand one in return, always with the public well-being as his ultimate objective.

Throughout his life Scott was a champion of the average man or, in his phrase, "the branchhead boys." Both as a governor and as a senator, his philosophy and programs reflected his years on country back roads with rural people. He felt equally at home making a college commencement address or milking a cow.

Scott suffered a heart attack early in April 1958 and was admitted to Alamance General Hospital, in Burlington, where he died. He was buried in the cemetery of the Hawfields Presbyterian Church near the graves of his parents and grandparents.

On 2 July 1919 Scott married Mary Elizabeth White, a childhood friend whom he called "Miss Mary" throughout his life. They had two sons, Robert and Osborne, and a daughter, Mary Kerr. Both Scott and his wife were active members of the Hawfields Presbyterian Church. Even during Scott's term as governor, they seldom missed Sunday morning worship services in their home church.

Memorial Services Held in the Senate and House of Representatives of the United States for William Kerr Scott (1958).

Per the NC History

Per the NC History Encyclopedia, the Black man appointed to the State Board of Education was Harold Trigg. Just wanted to name him!

Thank you for your comment and for bringing this to our attention! I've found resources that corroborate Dr. Harold Trigg was indeed the first black man to be appointed to the State Board of Education and have made a revision to this entry.