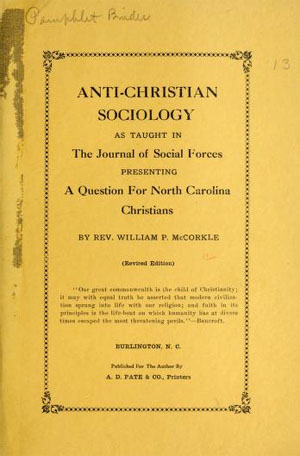 William Parsons McCorkle, clergyman and religious writer, was born in Talladega, Ala., the second son and third child of Alexander B. and Lucila Agnes Cambol McCorkle. Alexander (1806–86) was a native of Rockbridge County, Va., and a descendant of the McCorkle and Glasgow families of that state. A Presbyterian minister, he preached widely in Virginia, Georgia, and Alabama and later helped to found a synodical college for women in Talladega (later the Presbyterian Collegiate Institute and Isbell College). Lucila Cambol McCorkle was the daughter of an Alabama minister.

William McCorkle, received his early education in private schools in Alabama, and in 1870 he entered Washington and Lee University. Although referred to as "Dr. McCorkle" later in life, he was never graduated from Washington and Lee, nor did he ever receive a D.D. degree. Rather, according to a eulogizer, "this degree was conferred upon him by those who knew him and his work."

After leaving Washington and Lee, McCorkle taught briefly at private schools in Staunton, Va., and Lenoir, N.C. In 1876 he was licensed to preach by the Virginia Conference of the Methodist Episcopal Church, South, and five years later was ordained. On 30 Dec. 1879 he married Sarah Tallulah (Lutie) Andrews, a Charlotte writer. From 1881 to 1884 he served as pastor to churches in Beaufort, LaGrange, and Elkin; he then was called to serve in El Paso, Tex. On his return to North Carolina in 1888, he became a minister of the Presbyterian church and remained so until his death. After a brief pastorate in a rural church near Charlotte (1888–89), McCorkle served churches in High Point, Jamestown, and Lexington (1889–91), Shelby (1891–96), Graham (1896–1901), Savannah, Ga. (1901–7), Martinsville, Va. (1908–19), and Burlington, N.C. (1920–21). From 1921 until his death, he served several churches of the Orange Presbytery in the Burlington area, and in 1927 he became pastor-at-large for the presbytery.

Although McCorkle was well known among Presbyterians for his preaching and pastoring, he became best known to the public through his many writings. His interest in the relationship of Christianity to science and the modern world led him to publish one book, Christian Science; or, The False Christ of 1866, and a host of articles in church publications such as the Presbyterian Standard, Southern Presbyterian Review, Biblical Recorder, and Union Seminary Review. Particularly during 1925 and 1926, he became a leader of ministerial opposition to the sociologist Howard W. Odum and the Journal of Social Forces at The University of North Carolina. McCorkle wrote frequent articles expressing his views in newspapers in Charlotte, Greensboro, and other Piedmont cities, and he produced a controversial pamphlet attacking Odum and modern science, entitled Anti-Christian Sociology as Taught in the Journal of Social Forces. . . . During this time, he also was active in mustering the support of Presbyterians for the Poole bill, introduced by Representative D. Scott Poole in 1926 to prohibit the teaching of evolution in the state's schools.

McCorkle continued to preach until his death, becoming involved near the end of his life in efforts to oppose the national unification of Presbyterian, Reformed, and other Calvinist churches. He died and was buried in Burlington. He was survived by his wife, but no record exists of any children.

Minutes of the One Hundred and Twentieth Annual Sessions of the Synod of North Carolina (1933). https://archive.org/details/minutesofannuals1933pres (accessed August 11, 2014)