Doctor Bulla McCrary, merchant, manufacturer, philanthropist, and chairman of the North Carolina State Highway Commission, was born on a farm near Asheboro, the son of William Franklin and Frances Briles McCrary. Known throughout his life as "D. B.," he was educated at Oak Ridge Academy and at Trinity College before its removal from Randolph County to Durham. His earliest business experience was as a dealer in timber products. In 1898 he established residence in Asheboro where he opened a hardware and farm implement store in partnership with Thomas Henry Redding, who became his brother-in-law. In 1908 the two acquired Acme Hosiery Mills, a small plant in Asheboro making women's cotton stockings. In 1916 they purchased Sapona Cotton Mills, which had been operating as a cotton yarn mill in nearby Cedar Falls for about eighty years. Sapona was a source of yarn for the hosiery plant until cotton was superseded by silk and synthetic fibers.

McCrary Hosiery Mills was established in 1927 to produce ladies' full-fashioned silk stockings to complement the circular knit product made in Acme. In 1936 the cotton mill became the Sapona Manufacturing Company, converting to silk processing at the time and later to the production of nylon and other synthetic textured yarns. With the acquisition of Marlowe Manufacturing Company of Florence, S.C., after McCrary's death, the textile complex that he had founded became Acme-McCrary Corporation, one of the largest of its kind. In the 1980s it was still a closely held corporation—its stock never having "gone public." 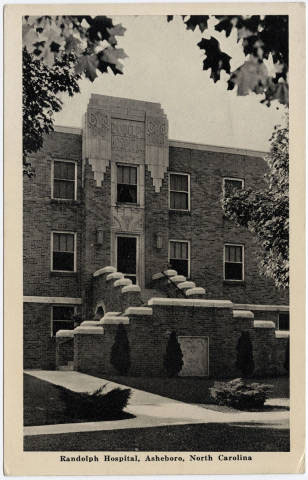 When his two sons, Charles Walker and James Franklin, proved to be able executives early in their business careers, McCrary was able to devote much of his time to the building of a hospital for the people of Randolph County. With his generous contributions plus funds raised by public subscription and substantial help from the Duke Endowment, Randolph Hospital was constructed and opened to receive patients during the early depression years. His continued support and a large bequest at his death enabled the hospital to maintain a steady growth and to expand its facilities many times. The D. B. McCrary Wing was added to house the administrative offices and two additional floors for patient care. His portrait hangs in the reception area at the entrance.

McCrary's innate integrity and reliability made him a natural leader of his community; he served two terms as mayor, was a founder of the first building and loan association of Asheboro, and served as president of the Bank of Randolph (later merged with Wachovia Bank and Trust Company). He was a charter member of the chamber of commerce and the Rotary Club. For many years he was chairman of the administrative board of the First Methodist Church and a principal benefactor, holding at various times a number of posts in the Western North Carolina Conference of the Methodist church.

In 1937 McCrary was appointed a district commissioner of the North Carolina State Highway Commission by Governor Clyde R. Hoey; he was reappointed by Governor J. Melville Broughton. During the terms of these governors, when it became necessary to appoint an interim chairman of the commission, McCrary was named on each occasion. He declined to accept the chairman's salary during the many months he headed the state system, receiving only the district commissioner's per diem stipend. He was intensely interested in construction projects of every sort, and his knowledge of the state's roads and highways was extensive.