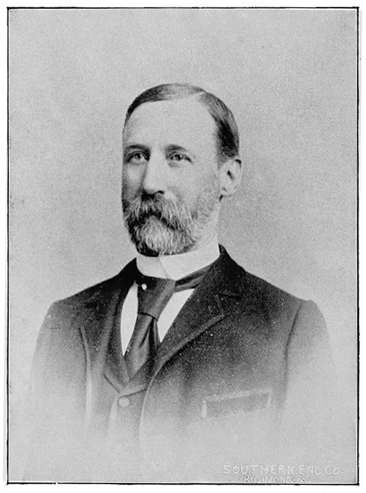 James Madison Mullen, jurist and legislator, was born in Pasquotank County, the son of James Whedbee and Susan W. Clary Mullen. His niece Emily, the daughter of Antoinette Mullen and George Gilliam, married Sterling Gary of Halifax. During her long life she and her stepdaughter, Nannie Gary, did much to preserve both the history and the historic sites of that town.

Mullen attended the Hertford Male Academy but left his studies in February 1862 to join the Confederate army, enlisting in the Virginia battery of Captain S. Taylor Martin, of Major Francis S. Bogg's battalion of light artillery. In October 1863 he was transferred to Captain L. H. Webb's North Carolina battery in the same battalion and so served until the end of the war. In 1890, in an address before the A. P. Hill Camp of Confederate Veterans meeting in Petersburg, Va., Mullen related his experiences during the fifteen days preceding General Joseph Johnston's surrender at Hillsborough. Withdrawing from the town of Weldon, where they had been assigned to guard the Wilmington and Weldon Railroad, the members of Webb's battery passed through the counties of Warren, Franklin, and Nash before General Laurence S. Baker, the commanding officer, arranged their surrender to General William T. Sherman. In this speech, later published in War Talks of Confederate Veterans, Mullen made interesting observations on the reaction of the civilian population in this part of North Carolina to the collapse of the Confederacy.

In 1866 Mullen was appointed register of deeds for Perquimans County, an office he held for two years. Having studied law in his leisure time under Thomas G. Skinner of Hertford, he was admitted to the bar in January 1869 and settled in the town of Halifax to practice. A successful attorney, he represented Halifax County in the state senate for the term beginning January 1885. In July 1886 he moved to Petersburg, Va., and formed a partnership with Richard B. Davis, at the same time retaining his North Carolina practice in Halifax and Northampton counties. In 1888 he was elected attorney for the city of Petersburg, serving for six years. In 1894 Mullen succeeded David Meade Bernard, Jr., as judge of the Hustings Court of Petersburg, a post he held until his death.

During his thirty-six years on the bench, he won the respect and affection of the bar; he was especially revered by the younger members, in whom he took a keen interest and to whom he showed great courtesy and consideration. A portrait of Judge Mullen hangs in the courthouse in Petersburg. An active member of St. Paul's Episcopal Church in that city, he was buried in Blandford Cemetery, Petersburg.

On 13 Oct. 1875 Mullen married Evelyn A. Grigg, the daughter of Wesley and Augustina Wells Grigg of Petersburg. They had four children who survived to maturity: James, Thomas Wilson, Grizelle, and Clary Sutton.