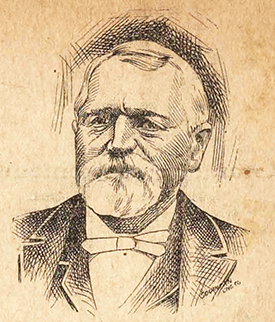 Thomas Gregory Skinner, congressman and lawyer, was born in Perquimans County near Hertford, the son of James Costen and Elmira Ward Skinner. His father was a planter and served in the General Assembly. Skinner was educated at Belvidere Academy, Kellog School in Sunbury, and Horner Military School in Oxford. He entered The University of North Carolina in 1858 but withdrew in May 1861 to enlist in the Orange Light Infantry, a part of D. H. Hill's First Regiment of North Carolina Volunteers. He served in a number of units and attained the rank of sergeant.

After the war Skinner returned to Hertford and in 1868 obtained a license to practice law. Following the death of Walter F. Pool, he was elected on 20 Nov. 1883 to represent the First District in the Forty-eighth Congress. Reelected twice, he also served in the Forty-ninth (1885–87) and Fifty-first (1887–91) congresses. In 1899 he represented his state district in the North Carolina Senate.

Skinner held extensive land in the northeastern section of the state including that on which was located the Newbold-White House, perhaps the oldest surviving house in North Carolina. He was married three times: to Penelope Tucker in 1872, to Martha Tucker in 1880, and to Jessie Pailin in 1884. His children were Nellie, Fannie, James Costen, Thomas Gregory, Jr., and William Pailin. He was the half brother of Harry Skinner, another congressman from the First District. A Democrat, a Mason, and a member of the Episcopal church, he was buried in Holy Trinity churchyard, Hertford.