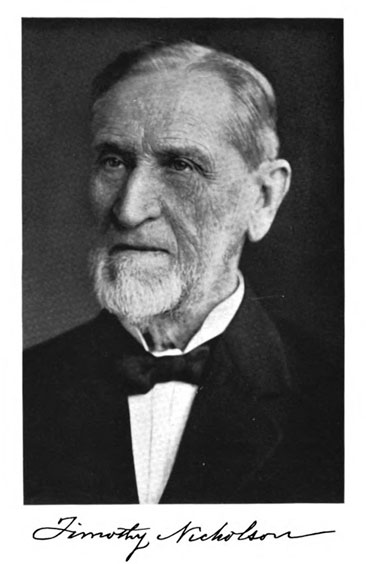 Timothy Nicholson, Quaker humanitarian, was born near Belvidere in Perquimans County, the second son of Josiah and Anna White Robinson Nicholson, whose forebears had long been prominent in the area. His paternal ancestors emigrated from Cumberland, England, to Marblehead, Mass., before 1650, and his third great-grandfather, Christopher Nicholson, was one of the first Quakers in North Carolina. His great-grandfather, Thomas Nicholson, was a noted missionary, author, and pre-Revolutionary opponent of slavery.

Reared in a rural atmosphere stressing hard work and upright behavior, young Nicholson received his earliest formal education at a local subscription school and at Belvidere Academy. In 1847 he went to Friends School in Providence, R.I., to complete his studies. Returning to North Carolina, he reluctantly abandoned his intention of farming to become a teacher and principal at Belvidere Academy in 1849. In the same year he was appointed county surveyor of Perquimans. In 1855 Pennsylvania's Haverford College appointed him head of its preparatory department; after holding that position for four years, he served for two years as Haverford's superintendent and business manager. In 1861 he moved to Richmond, Ind., where he operated a bookstore and later founded Nicholson Printing Company. His success in business was widely recognized, and he became an organizer of the American Book Trade Association.

During his sixty-three years in Indiana, Nicholson was a progressive leader both in Friends' work and worship and in such areas of social concern as education, penal reform, public welfare, temperance, peace, and woman suffrage. Renowned for his sympathetic understanding, practical judgment, tireless energy, and moral courage, he held executive positions in many religious and secular organizations. Friends appointed him elder, clerk of Whitewater Monthly Meeting, clerk of Indiana meeting of ministers and elders, clerk of Indiana Yearly Meeting, and member of numerous committees. (His brothers held similar positions among Friends—John in Maryland, Josiah in North Carolina, and William in Kansas.)

Nicholson participated in the establishment of a uniform discipline and Declaration of Faith for all American Friends and was a founder of the Five-Year Meeting of Friends in 1902. He was active in state, national, and international Sunday school associations and was a cofounder of the Indianapolis Morning Star for the expression of Quakers' views. For forty-nine years he was a trustee of Earlham College, devoting much attention to its management and finances. In the 1860s and 1870s he also served on the Richmond Public School Board and on the board of trustees of Indiana State Normal School. As secretary of Indiana Yearly Meeting's committee on prison reform, of which he was a member from 1867 to 1909, and as a member of the Indiana Board of State Charities from 1889 to 1908, Nicholson played a notable part in securing the humane improvement of the state's prisons, poorhouses, and hospitals. He was president of the State Conference of Charities and Corrections in 1896 and of the national conference in 1902. Believing that Prohibition would reduce many social ills, he worked against the liquor interests and was president of the Indiana Anti-Saloon League from 1898 until his death.

From his early efforts to have Friends released from the Civil War draft through his fund-raising activities for world relief after World War I, he worked earnestly for peace. It was principally through his efforts that the conscientious objectors' exemption was added to the national Militia Bill of 1903. A Republican, Nicholson was a steady opponent of government corruption and inefficiency at all levels. State and national leaders sought his advice or felt his influence, and he became one of the best-known Quakers in America. Earlham College awarded him an honorary doctorate of laws in 1922, and the press hailed him as "Master Quaker," "Dean of Booksellers," and Indiana's most useful public servant. His public writings included an autobiographical sketch and several short works on religious and social topics.

Willard Heiss, ed., Abstracts of the Records of the Society of Friends in Indiana: Part One (1962).