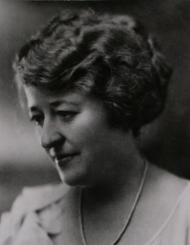 Annie Land O'Berry, administrator of the North Carolina Emergency Relief Administration, president of the Rural Rehabilitation Corporation, and a leader in women's clubs, civic affairs, and the Democratic party, was born in Edgecombe County to V. W. and Mary Dawson Mayo Land. Her father, a Virginian by birth, was a veteran of the Civil War, and her mother was a descendant of the Lees of Virginia and the Mayos of Virginia and Ireland. Annie lived on the family plantation, enjoying outdoor sports, until she was thirteen, when her parents died; she then went to live with her sister in Littleton.

She attended Littleton College and later was graduated first in her class from Peace Institute in Raleigh. After college she made her home with her brother, Edward M. Land, an attorney in Kinston. On 14 Dec. 1909 she married Thomas O'Berry, whose father, Nathan O'Berry, was a prominent citizen and lumberman in Goldsboro. Her father-in-law served as treasurer of North Carolina from 1929 until his death in 1932. Her husband founded an insurance agency in his hometown and later served in the North Carolina House of Representatives (1933 and 1935) and the state senate (1941–48).

Soon after moving to Goldsboro with her husband, Annie O'Berry became very active in civic groups and women's clubs. Among the many positions that she held, she was first chairman of the antituberculosis committee in Wayne County and president of the city charity organization. By 1920 she had become interested in women's club work, associating with Gertrude Weil of Goldsboro and many others. She especially promoted beautification of the city, charity efforts, and civic involvement of women. Rising rapidly through the local and state offices in the North Carolina Federation of Women's Clubs, she was president of the organization from 1927 to 1929. During her administration she stressed education and a program to obliterate adult illiteracy. Her sister-in-law, Marie Long Land (Mrs. Edward M.), who by then had moved from Kinston to Statesville, followed her as president from 1929 to 1931.

Annie O'Berry later held positions as a member of the executive committee of the General Federation of Women's Clubs in the United States. Meanwhile, as a result of her involvement in other civic projects, Governor Angus W. MacLean named her to the state Commission to Study County Government (1926) and to the State Historical Commission (1928). In 1930 Governor O. Max Gardner appointed her vice-chairman of the state executive committee of the Democratic party.

While working with the charity organization in Goldsboro, she personally investigated relief cases in her hometown and took a course in social work at Columbia University to better equip herself for this effort. When Kate Burr Johnson resigned as commissioner of charities and public welfare in 1930, Annie O'Berry sought to replace her. However, she lost the position to Annie Kiser Bost because of concerns about Mrs. O'Berry's health.

During the early years of the Great Depression, her father-in-law helped her raise five thousand dollars to assist white-collar persons who were victims of the depression but not destitute enough for regular relief. Because of this work and her important political connections, Governor J. C. B. Ehringhaus, in August 1933, chose her to head the new North Carolina Emergency Relief Administration, created by the Federal Emergency Relief Administration under Harry Hopkins. After the name of the organization was changed to the Civil Works Administration in the winter of 1933–34, she continued as director. She also remained administrator of the NCERA until 1935, when its work was transferred to either the newly created Works Progress Administration or the State Board of Charities and Public Welfare. Mrs. O'Berry sought unsuccessfully to be named administrator of the WPA for North Carolina, a post that went to George A. Coan, Jr., since WPA positions were a patronage of U.S. senators rather than state governors. She continued until her death to hold the nominal position of president of the North Carolina Rehabilitation Corporation, an agency that had been created under the NCERA to lend money to farmers to buy land; it continued to receive payments on those loans for more than a decade.

After the demise of the NCERA, Mrs. O'Berry became less active in state affairs as she experienced repeated illnesses. She died in a hospital in Baltimore, Md., where she had gone for an operation, and was buried in Willow Dale Cemetery, Goldsboro.

The O'Berrys had no children, but Annie O'Berry had raised her nephew, Virginius Boddie Perry, whom she treated like a son.

One of the few women emergency relief administrators in the United States, Mrs. O'Berry demonstrated the ability of women to handle what was considered a complex, dirty, and difficult task. She was responsible for providing relief to thousands of North Carolinians, negotiating with labor groups, and dispensing in little more than two years over $52 million in relief funds on projects as varied as a state symphony orchestra, highway and airport construction, beautification projects, and basic sustenance to disabled and destitute persons who were unable to work on the relief projects.