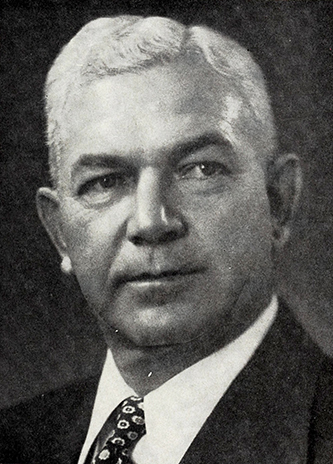 Hubert Ethridge Olive, Sr., superior court judge, legislator, and Baptist layman, was born in Randleman of English-Irish ancestry, the sixth child of Andrew Jackson (24 Oct. 1894–18 Feb. 1911), a farmer, and Emma D. Beckwith Olive (29 Dec. 1854–25 Mar. 1945). He was the grandson of Henderson (1826–65) and Martha Jane Ragan Olive (1827–92). Young Olive attended the public schools of Thomasville. Enlisting in the army in 1917, he served for a year in France with the 317th Field Artillery of the 81st Division, popularly known as "the Wildcats." He was honorably discharged as a first lieutenant in 1919. While he was in Europe, he enrolled at Toulouse University for four months.

Returning to America, Olive attended Mars Hill College and Wake Forest College, where he received a law degree. As an undergraduate, he played football for four years. He remained a student in spirit throughout life, exercising a well-disciplined mind and a thirst for knowledge; he held membership in Phi Delta Phi legal fraternity. In 1922 he began a law practice in Lexington; later he was a judge of the town's lower court. In 1933 Olive was elected from Davidson County to the North Carolina House of Representatives, where he ably served his constituents. He was a convincing orator and received many important house committee assignments. From 1934 to 1935 he was department commander of the North Carolina American Legion.

In the election of 1936, Olive served as Clyde R. Hoey's primary campaign manager. In 1937 he was appointed by the governor to the superior court bench and later was reappointed by Governor J. Melville Broughton for two more terms, serving for eighteen years. From 1947 to 1949 he was chairman of the State Board of Elections. In 1955 he was named resident judge of the Twenty-second District Court (composed of Davidson, Iredell, Alexander, and Davie counties) at its formation. In 1956 he was elected to the post and served for six more years.

A spectacular personality in the courtroom, Olive had a powerful, resonant voice, a great abundance of thick white hair, and a massive six-foot frame (he wore a size fourteen shoe). Under his judgeship, court was held in a dignified, authoritative manner without any impudence or horseplay. Olive felt that the court existed for the sole purpose of ensuring that justice would be done. In 1947 he returned to his law practice, but because of his judicial ability, he was drafted to serve as an emergency judge on numerous occasions. Olive was a participating jurist for the North Carolina Bar Association and a member of the North Carolina State Bar.

A contender in the Democratic gubernatorial primary of 1952, he was defeated by a narrow margin (294, 170 to 265, 675) by William B. Umstead of Durham. The primary cost him $61,579. He served on the board of trustees of Wake Forest College for many years and was its chairman for six terms. Over the years he was active in the alumni affairs of Wake Forest, giving able leadership as time would permit. He was president of the Wake Forest General Alumni Association during the crucial years when the college moved from Wake Forest to Winston-Salem. Prior to 1956 he was appointed chairman of the financial drive to match the $7.5 million offered by the Z. Smith Reynolds Foundation to implement the move.

Olive was an outstanding civic and political leader in the state and in his home community of Lexington. Committed to the work of the First Baptist Church in that town, he served as chairman of the Board of Deacons, as a committeeman in many capacities, and for forty years as a teacher of the Olive Men's Bible Class. Indeed, he was considered one of the most competent, willing, and scholarly laymen of his day. His fellow citizens highly respected his integrity and judgment. Olive knew when to be silent and when to be eloquent.

In 1921 he married Charlotte Ann Southerland, the daughter of Dr. Robert Edgar and Valeria Virginia Williams Southerland of Henderson. They had three children: Virginia (m. Louis S. Hartzog), Hubert, Jr. (m. Catherine Sloxer Hodgin), and Charlotte Ann. His son became a lawyer in Lexington. Olive died suddenly in Pinehurst while attending a judicial conference. He was buried in Forest Hill Memorial Park, Lexington. A portrait of him hangs over the judge's bench in the Davidson County courthouse, and another is located at Wake Forest University.