James Larkin Pearson, poet and printer, was born of English and Scotch-Irish ancestry in a log cabin on Berry's Mountain three miles from Boomer in Wilkes County, the oldest of two sons of William Thomas and M 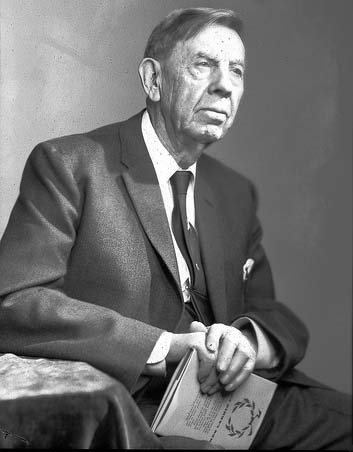 ary Louise McNeill Pearson, unlettered laborers constantly moving from one rented farm to the next. At age four, while riding with his father in an ox cart one bitter January day, upon being asked if he was cold, the child replied, "My fingers an' my toes, / My feet an' my hands, / Are jist as cold as / Ye ever see'd a man's." From ages seven to fifteen, he attended the rural schools for a few weeks each winter, but his education came primarily from reading. Pearson once said that he could never remember when he did not plan to be a poet. During his workday on the farm, he always took along a notepad and, in the tradition of Robert Burns, jotted down stanzas as he plowed the mountain soil. He considered "The Vision," written when he was twelve, his first "finished" poem. In 1896 the Blue Ridge Times at Parsonville in Wilkes County printed some of his work, and the New York Independent in December 1900 paid him eight dollars for "The Song of the Star of Bethlehem." Thereafter Pearson thought of himself as a professional poet.

From farming he turned to carpentry, then at age twenty-one learned to set type for the Republican Patriot across the mountain in Jefferson. He soon started his own paper Paper Talk and intermittently edited, published, and worked for a number of newspapers in the area, notably the Yellow Jacket of Moravian Falls, whose owner R. Don Laws sent him to Washington, D.C., in 1903 as correspondent for his lucrative political journal. For a few months in 1907 he was with the Charlotte Observer and there became acquainted with the North Carolina poet John Charles McNeill.

In Charlotte on 1 May 1907 he married Laws's sister-in-law, Cora Wallace, whom he had chosen for his wife seven years before. Like him, she was a writer and a printer but her activities were much restricted because of poor health both before and after marriage. The couple returned home, opened a print shop, and the following year hand-set Castle Gates, Pearson's first little book of poetry. An infant named Blanche Rose was stillborn. In 1910 he began publishing the Fool-Killer, a monthly intended, according to Pearson who wrote most of the copy, "to make a fellow laugh right big and to cram a truth down his throat while his mouth was open." At fifteen cents a year, it grew rapidly in circulation, up to 50,000 at one point, and brought Pearson a measure of prosperity. In 1916 operation of the paper was transferred to a fifty-acre farm near Boomer. But over the years, the hopeless illness of his wife and his constant beside attention lessened his enthusiasm for the satiric comment that was responsible for the success of the venture. Its fortunes declined and its last number was published in 1929.

Meanwhile, his bachelor brother John Milton Pearson had died on 29 Apr. 1923. In the same year the Pearsons adopted a daughter, Agnes Vivian. In 1924 he brought out the 274-page Pearson's Poems, the second of five books of his poetry to come from his one-man printing and publishing office. Though frustrated in his efforts to be published commercially, Pearson was not unknown. The prominent American novelist Upton Sinclair praised him in Money Writes~! (1927) and later in Another Pamela (1950) used Pearson as the basis for the character of a bucolic poet. Sinclair also urged him to seek a wide audience and introduced him to the New York Times, which accepted a number of his poems, including "Fifty Acres" (27 June 1930), destined to be his signature and the title poem of his next little book, Fifty Acres and Other Selected Poems (1933). His "discovery" by North Carolina began at this time, and soon he was being honored as much "for his simplicity, sincerity and poverty, as for his melodious verses." His wife died (see "Bereft") on 17 June 1934. On 4 December of that year, upon being invited by Frank Graham to be on the program at the annual meeting of the North Carolina Literary and Historical Association in Raleigh, Pearson spoke of his life as poet and read some of his verse. So impressive was his presentation that the News and Observer was prompted to note editorially: "More than any other living North Carolinian he has put the life of the people into poetry, made it tangible and beautiful and easily seen."

The public recognition he had so long sought did not dispel the loneliness he experienced after his wife's death. By January 1937 he had moved his print shop to Lincolnton and was publishing the short-lived Literary South, but soon he was back in Wilkes County. His marriage on 6 Apr. 1939 to Eleanor Louise Fox, whom he had met four years earlier at a writers' conference in Black Mountain, brought about his move to her home in the village of Guilford College, where he was pleasantly established for the next twenty-one years. There he printed the last two of his series of self-published books, Plowed Ground: Humorous and Dialect Poems (1949) and Early Harvest: The First Experimental Poems of a Self-Taught Farm Boy (1953). On 4 Aug. 1953, in accordance with the unanimous recommendation of the Awards Committee of the North Carolina Literary and Historical Association, Governor William B. Umstead, following the resignation of Arthur Talmage Abernethy, appointed Pearson as the official poet laureate of North Carolina during an impressive ceremony at the capitol in Raleigh.

After the death of his second wife on 27 Apr. 1962, Pearson went back to Wilkes County to live with his adopted daughter Agnes (Mrs. Albert Eller). He died in North Wilksboro seventeen days before his one hundred and second birthday and was buried in the family plot at the Moravian Falls Cemetery. On his tombstone were prominently lettered the words "Printer and Poet." His printing press, personal library, manuscripts, and oil portrait (1970) by Joe King are housed in the James Larkin Pearson Building at Wilkes Community College. Pearson was a Republican and religious nonconformist. Poems such as "Fifty Acres," "Homer in a Garden," "Choice," "More Than Power," "Lincoln," and "Erosion" are lyrical, optimistic, and traditional in form and meter, his dialect verse simple and lighthearted. Selected Poems (1960) and "My Fingers and My Toes " (1971) were well-received collections from commercial publishers.