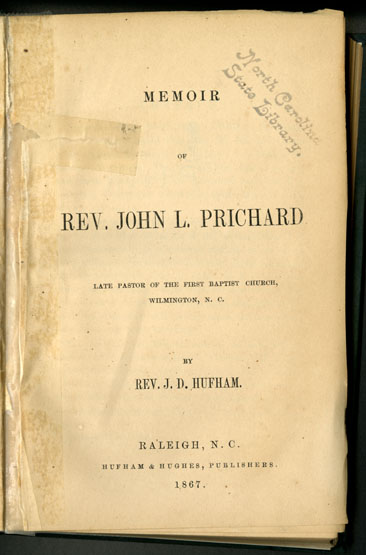 John Lamb Prichard, clergyman, was the second of six children born to Enoch and Clarissa Gregory Prichard of Pasquotank County. His paternal great-great-grandfather, David Prichard, was a Welsh immigrant to Pasquotank Precinct. His maternal ancestry, of Scottish-English origin, had settled in New England prior to moving to the Albemarle region.

Bereft of a father at age nine, Prichard and his family then moved to the home of his maternal grandparents, the Willis Gregorys, in Camden County. There he was employed in work on the farm and later as an apprentice carpenter. Determined to pursue a formal education, Prichard enrolled in Wake Forest College in 1835, taking advantage of the institution's manual labor program to pay expenses and fees. He received the B.A. from Wake Forest in 1840 and was awarded a master of arts degree in 1843.

Prichard taught in the Hertford Academy, Murfreesboro, during the academic year 1840–41. However, he had also been conducting occasional religious services for several years and had been licensed to preach the gospel while a student at Wake Forest. Accordingly, he was induced to accept the pastoral care of First Baptist Church, Danville, Va., in November 1841. Ordained by the Danville church in March 1842, Prichard devoted the remainder of his years to the pastoral ministry, serving churches in Pittsylvania and Campbell counties in Virginia and in Caswell and New Hanover counties in North Carolina.

He served the following churches: First Baptist, Danville, 1842–52; Upper Banister, 1842–49; Bethany, 1843–52; Sandy Creek, 1843–45; and Mount Ararat, 1847. During the last year of his residence in Danville, he also kept monthly preaching appointments with the Baptist churches at Milton and Yanceyville, Caswell County. In February 1852 Prichard began a ministry of four years' duration with First Baptist Church, Lynchburg, where he is credited with having succeeded in restoring harmony among discordant elements of long standing within that congregation.

On 31 Jan. 1856 he returned to North Carolina to assume the pastoral care of Front Street Baptist Church (First Baptist Church), Wilmington. Here he labored diligently and sacrificially—especially in ministrations to the soldiers hospitalized in the city during the early months of the Civil War. Prichard fell victim to an epidemic of yellow fever that ravaged the port of Wilmington and vicinity during the autumn of 1862, having refused the pleas of family and friends to seek his own safety in order that he might minister to the needs of the sick and dying.

In denominational councils, Prichard is said to have been a persuasive advocate of those benevolent causes (missions, theological education, Sunday schools, and the like) towards which some of his fellow churchmen still maintained only lukewarm attitudes, at best. As preacher and pastor, he was characterized in the following manner by his biographer, James Dunn Hufham: "His sermons were carefully prepared, and delivered in the earnest and forcible manner characteristic of the man. They were plain, pointed, and practical, and free from the tinselry of rhetoric, and those extraneous ornaments which often give a preacher notoriety, and please without edifying his hearers. . . . As a pastor he had few superiors. His knowledge of human nature, his suavity of manner, his strong affections and active sympathies, and his untiring energies . . . peculiarly fitted him to shine in this sphere."

J. D. Hufham, Obituary on J. L. Prichard, in Minutes of the Twentieth Annual Session of the Union Baptist Association (1863).