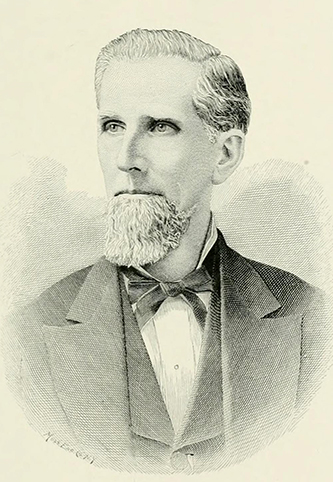 James Graham Ramsay, physician and Confederate congressman, was born on his father's small plantation in Iredell County. Both parents, David and Margaret Graham Ramsay, were of Scotch-Irish descent. The Ramsays had emigrated in 1695 to Pennsylvania, and Dr. Ramsay's grandfather had moved to the Coddle Creek community in Iredell in 1766.

After obtaining his basic education in the local schools, young Ramsay entered Davidson College in 1838 and was graduated three years later. He taught school for a year, then studied medicine with his brother-in-law before entering the Jefferson Medical College in Philadelphia, where he was graduated in 1848. He opened an office near Cleveland in Rowan County, using part of his stately home, Palermo, for this purpose, and practiced there for the next fifty-one years. In 1849 he helped organize the first medical society in Rowan and was its first president. Ramsay also farmed on a small scale; the census of 1860 reported that he had real estate worth $10,000 and owned five slaves.

Ramsay was one of the more politically active men of his district. An excellent public speaker, he campaigned vigorously and faithfully for the Whig party and its candidates at each election. In 1856 he was sent to the state senate, where he served until 1864. In 1860 he supported the Bell-Everett ticket and was an ardent peace advocate until Abraham Lincoln's call for volunteers in April 1861 to quell the Southern rebellion. In 1863 Ramsay ran against the incumbent William Lander for a seat in the Confederate House of Representatives; he attacked Lander's strong support of the Davis administration and promised to work for an honorable peace if elected. Ramsay, who had the strong endorsement of W. W. Holden's Raleigh Standard, defeated Lander decisively.

In the Confederate Congress Ramsay was a member of the committees on the Medical Department and Naval Affairs. He seldom offered legislation of his own, but he voted so consistently to place state and individual rights over the needs of the Confederate war effort that his loyalty was suspect. He opposed higher taxes, extending conscription or limiting exemptions from military service, suspending the writ of habeas corpus, the impressment of farm produce for army use, and all other major administration measures. He worked consistently to force President Jefferson Davis to seek peace terms from the United States, and by April 1865 he favored a state convention to return North Carolina to the Union.

After the war Ramsay became an active Republican. In 1872 he was a presidential elector, and in 1882 he was returned to the senate for one term. President Rutherford B. Hayes offered him a diplomatic post in South America, but he declined the honor. Ramsay spent his last years in Salisbury with his son, and upon his death was interred in the cemetery of the Third Creek Presbyterian Church, near Cleveland, where he had been a ruling elder for forty-nine years.

The tall, spare physician was one of the best-read men of his community, and his contemporaries considered him "polished in his manners, precise but not still in his address, [and] . . . of fine conversational ability." In 1846 he married Sarah Foster of Davie County. Their children were Margaret F., Florence May, David W., James H., Edgar B., William G., Robert L., and Claudius C.

Ramsay, James G. The education of the masses of the people: an address delivered at the request of the Athenaean Society before the literary societies of Catawba College, on the 16th day of November, 1854. Salisbury, N.C.: Miller & James, Printers. 1854. https://archive.org/details/educationofmasse00rams (accessed September 3, 2013).