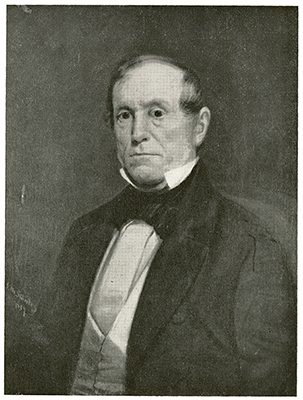 Abraham Rencher, lawyer and legislator, son of John Grant and Ann Nelson Rencher, was born in Wake County, near Raleigh. His father, a native of Ireland, was for several years the sheriff of Wake County. Young Rencher received his preparatory education at the Reverend John Chavis's school in Raleigh and in 1822 was graduated with honors from The University of North Carolina, receiving the B.A. degree. He then studied law under Judge Frederick Nash in Hillsborough. Upon receiving his license in 1825, he began to practice law in Pittsboro, which remained his legal residence until his death.

Rencher had not been in practice long before he became active in politics. From 1829 to 1839 and from 1841 to 1843 he represented the Tenth Congressional District in Congress. During his first eight years in the House of Representatives Rencher was a Democrat and for his last four a member of the Whig party. He broke with Andrew Jackson in 1835, when the president "illegally" removed the federal government's deposits from the Bank of the United States. Rencher remarked to his constituents that Jackson "too often trampled on the forms of the Constitution when they came into conflict with his own will." Up to this time Rencher had been a strong supporter of the president's policies. He voted against the recharter of the Bank of the United States, supported Jackson in his stand against nullification, voted for the compromise tariff measure of 1833, and opposed federal participation in internal improvements. His most important committee assignments were on Ways and Means and Foreign Affairs.

Rencher did not stand for reelection in 1838 because of ill health. Two years later, however, his health was sufficiently improved for him to run successfully on the Whig ticket for the Twenty-seventh Congress. In the extra session of this Congress, called by President John Tyler to meet in late May 1841, Rencher voted for the two bills proposed by the Whigs for the establishment of a national bank that were vetoed by Tyler. He said that he voted for the bank because "I was pledged so to do and because I believed, at that time, we could not have a sound currency without the aid of such an institution." He later remarked that he "had good cause to believe that, in this opinion I was wrong."

During the Twenty-seventh Congress, Rencher voted against many of the measures advocated by the Whigs. It appears that he was never in full sympathy with Whig principles and felt that the party treated Tyler unjustly. In appraising Rencher's congressional career a contemporary wrote that "he was characterized for his punctuality and diligence—as a working rather than a speaking member. He seldom addressed the House, but when he did, it was on something of importance, and his opinions never failed to command a respectful consideration even when they failed to produce conviction."

Rencher's loyalty to Tyler was rewarded when the president appointed him chargé d'affaires to Portugal on 22 Sept. 1843. He held this post until the spring of 1847, when President James Knox Polk appointed a political friend to succeed him. In January 1846 Rencher wrote a friend that he had learned that several of Polk's supporters wanted the post and that he, Rencher, "occupied too conspicuous a position to Mr. Van Buren and his friends to escape their revenge whenever they have an opportunity to exert it." Judging from the letters written to his relatives in North Carolina, Rencher enjoyed his life in Portugal. He frequently remarked on the friendly disposition of the royal family towards him and his family.

On returning to the United States Rencher resumed the practice of law in Pittsboro and the cultivation of his farm, Green Brook, situated just outside of the town. He also took up again his interest in local and state politics, now as a Democrat. Rencher delivered one of the important speeches of the Democratic state convention of 1852. He campaigned in the state for Franklin Pierce and William Rufus King and was an elector on that ticket. In 1854 he was elected president of the state Democratic convention. Following the election of 1856, President-elect James Buchanan offered Rencher the position of secretary of the navy, which he declined. Rencher was interested in securing another appointment, that of governor of the Territory of New Mexico, and waged an aggressive campaign to obtain it. Nine North Carolina state senators sent a statement to Buchanan recommending him. In August 1857 the president appointed Rencher governor of the Territory of New Mexico. Why he was so anxious for this post is difficult to understand. It is possible that Rencher's interests in the New Mexico Mining Company, organized in 1853, may have played a role. He owned six thousand shares of stock in this company. Writing to an official of the company on 22 June 1861 complaining of his treatment, Rencher said, "I have made great sacrifices for this company in every respect. As an inducement for me to come here, they agreed to pay me a certain sum of one thousand dollars per annum, until successful, and after that, twenty-five hundred." A few days later he wrote his son John that it would be greatly to his profit if he could remain in New Mexico a few years more since "we are just now beginning to work the mines to advantage."

On 11 Nov. 1857 Rencher arrived in Santa Fe with his wife and daughters to take over his duties. In his first address to the territorial legislature he stressed the need for establishing common schools, the development of the territory's natural resources, and an ad valorem tax to provide adequate revenue. He was able to accomplish the first of these objectives when in January 1860 the legislature passed a bill providing for public education. It was not until almost the end of his administration that he was able to reduce the public debt by more than half.

Rencher had not been in New Mexico long before trouble with the Navajo Indians began. He informed the secretary of state that the military establishment and the Indian agent were responsible for initiating the disturbance by their ill-advised and hasty actions. It was not long before he was at odds with not only the military but the legislature as well. Intermittent war with the Indians continued to plague his administration for almost all of his gubernatorial career.

Although Rencher was an outspoken proslavery man, he remained loyal to the Union as long as he continued in office. When Fort Fillmore was captured by Confederate troops on 26 July 1861, Rencher issued a proclamation calling upon "all good and loyal citizens to uphold the authority of the laws and to defend the Territory against invasion and violence from whatever quarter they may come." Two months earlier he had been notified that he would not be reappointed and that his successor would take over on 1 September.

Rencher returned to his home near Pittsboro where he resided for the remainder of his life. He died in Chapel Hill while visiting his daughter and was buried in the cemetery of St. Bartholomew's Episcopal Church, Pittsboro.