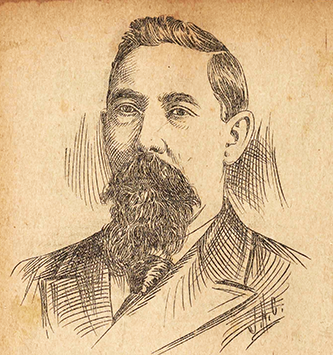 Charles Albert Reynolds, lieutenant governor of North Carolina, civil engineer, tobacco manufacturer, and farmer, was born in Madison, the son of Dr. Thomas and Sarah Jane Fewel Reynolds. They were not related to the tobacco manufacturing family of R. J. Reynolds. When their son was eighteen months old the Reynolds family moved to Leaksville, where he lived until he moved to Forsyth County in 1884.

Reynolds received his early education from a tutor, Colonel John R. Winston, in Leaksville. During the period 1867–68 he attended The University of North Carolina, but because of the unsettled conditions of Reconstruction he went to Princeton, where he studied engineering from 1868 to 1870. His mother died in 1870 and he returned home without graduating from either The University of North Carolina or Princeton. When his father died in 1872, Reynolds settled the family business and started work in tobacco manufacturing.

From 1876 to 1882 Reynolds served as deputy collector for the Internal Revenue Service in Reidsville. For several years he was also a justice of the peace. When a Republican governor, Daniel L. Russell, was elected in 1897, Reynolds was elected lieutenant governor. In this position, he strongly supported The University of North Carolina at a time when it was under fire from many state legislators. In 1901, during the concern over the South Dakota bond case, Reynolds published a brief pamphlet, "Justice" Calls for the Facts: why have the Democratic newspapers . . . become so silent about who furnished the carpet-bag bonds to Cuba? At one point near the end of his term, Reynolds was offered the governorship in an effort by Russell and other politicians to keep the Republicans in power by placing Russell in the recently vacated chief justice's seat on the state supreme court. Reynolds felt that the whole idea of such a political trade was contemptible and unfair to the people of the state and he rejected the offer.

When his term as lieutenant governor ended, Reynolds returned to Winston where he was appointed postmaster, a post he filled until 1913. During World War I he was a member of the Exception Board for Forsyth County. Reynolds also served as chairman of the Liberty Loan Committee for the county. Always a staunch Republican, he acted as chairman of that party's state committee and later as a committeeman representing North Carolina in the Republican National Convention.

In his own work as a civil engineer, Reynolds helped to build the first hydroelectric plant on the Yadkin River—the first in North Carolina. Constructed in 1897, this plant supplied power not only for homes and factories but also for the electric streetcars operated by this newly available energy source. A few years later Reynolds also worked on a larger hydroelectric plant in Asheville.

Displeased with the condition of the roads in his county, Reynolds requested the use of convict labor to crush stone for road construction. His request was granted and he began work on the first macadamized road in the county. The project was successful and in the next few years many roads were macadamized.

Reynolds was married on 18 May 1873 to Carrie Watkins Fretwell, also of Leaksville. They had no children and in his later years they moved from Winston-Salem to Colfax, where he died. He was buried in the family plot in Leaksville (now merged with adjoining Draper and Spray and renamed Eden).