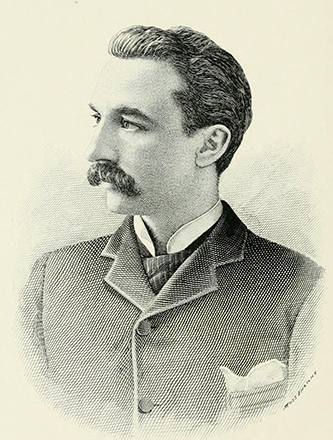 Joseph Edward Robinson, lawyer, newspaper editor, and civic leader, was born near White Hall (now Seven Springs) but in Lenoir County, of Irish parentage. He was the son of John, a graduate of the University of Dublin where he became a professor of mathematics and elocution, and Margaret Dillon Robinson, of County Antrim, a devout Roman Catholic who converted her Presbyterian husband to that faith. The couple, fearing that there was no more hope for Ireland, emigrated in 1847, with their two children, to Lenoir County, where John and his brother William conducted a school that they moved in 1854 to the new town of Goldsboro, where it flourished as the Wayne Institute and Normal College.

One of nine children, Joseph Edward Robinson grew up on his father's plantation, Tara (named for the ancient seat of the Irish kings), three miles west of Goldsboro at Belfast and at his father's town house in Goldsboro. He and his brothers were educated at the Wayne Institute and under private tutors, who grounded them in Latin and Greek before they studied English. Afterwards, for seven years, they had as their preceptor a Catholic priest of the Dominican Order.

In 1879 Robinson was graduated from St. Charles College, in Maryland, operated by the Sulpician Fathers, a teaching order. Rather than taking final orders for the priesthood, he studied law. In 1881 he was licensed by the North Carolina Supreme Court and began to practice at the Goldsboro bar along with Charles B. Aycock, William R. Allen, Frank A. Daniels, and, in the next few years, William T. Dortch, Jr. Their youthful friendship deepened with the years; later Governor Aycock appointed Robinson a member of his personal staff, with the rank of colonel.

Robinson won a reputation for himself in the practice of law, but in the meantime he began doing editorial work for the leading newspaper in Wayne County, a semiweekly called the Goldsboro Messenger. In April 1885 he joined with Charles Brantley Aycock and William Clement Munroe to establish the Goldsboro Daily Argus (now the Goldsboro News-Argus ). For a time the three men were joint editors, but eventually Robinson, who had initiated the business, bought his partners' shares. Colonel Joe, as he was called, a dedicated Democrat, in contrast to his older Republican brother, Judge W. S. O'B. Robinson, developed the Argus with its motto "We go forward" into one of the leading Democratic papers in eastern North Carolina, and his influence frequently helped to advance Aycock's political career.

University of North Carolina professor Joseph L. Morrison, in the Greensboro Daily News, wrote that Robinson built his community, but as for his paper he would publish nothing to "bring a blush to a maiden's cheek, or a tear to a mother's eye." Even before the great temperance wave swept the country, Robinson came out flatly against the issuance of licenses to saloons and bars and made it plain that not one advertising line could be bought at any price in the Argus by any of the thirty-one saloons then operating in Goldsboro. At the time of Robinson's death, the editor of the Greensboro Daily News wrote:

As a pioneer editor of the state, 43 years he devoted to his craft, and a patriotic citizen he never dodged the call to service but was always to be found in the forefront for any reform movement, for any advancement, for any undertaking which he believed would help his city, his section, or his fellow man. In his newspaper columns he ever avoided the unpleasant or the sordid. He weighted the contents of his paper in their human relationships and their human reactions. When he spoke out against individuals, it was always in the interest of a broader service and the community good. The paper which he long ran was not primarily the Argus; it was Colonel Robinson and recognized as such.

In his community Robinson was long chairman of the Wayne County Board of Education, a trustee of the Goldsboro Public Library, and a force in establishing and completing the Goldsboro Hospital, which he served for years as secretary of the board of trustees. He also inaugurated the "Empty Stocking" fund campaign at the Christmas season.

In recognition of his many services, the citizens of Goldsboro in 1927 established Robinson Park in the center of Goldsboro on South Center Street. Nine years after his death the Robinson Park Marker Unveiling Exercises were held on 9 June 1940. The inscription on the marker reads: "Dedicated in appreciative memory of Joseph E. Robinson, 1858–1931, who as devoted citizen and as editor of The Goldsboro Daily Argus for forty-four years inspired his neighbors to create a better community."

Colonel Joe was married on 15 Nov. 1893 to Ada Clingman Humphrey, a daughter of Colonel Lott W. Humphrey of Goldsboro. They left no children. He died at his home at the Hotel Goldsboro and, like so many of his brothers and sisters, was buried from St. Mary's Roman Catholic Church. Interment was in Willow Dale Cemetery.