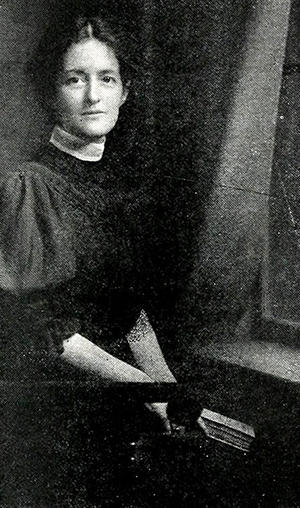 Margaret Busbee Shipp, magazine writer, was born in Raleigh. Her father was Fabius H. Busbee, a Confederate veteran, University of North Carolina graduate, and prominent lawyer. His father was Perrin Busbee, a member of the Dialectic Society while at The University of North Carolina and a reporter of the North Carolina Supreme Court at his death in 1853. Her mother was Annie McKesson, the daughter of Margaret McDowell McKesson, "a brilliant wit," and William F. McKesson, a well-to-do trader and contractor of Morganton.

Margaret Busbee attended St. Mary's School in Raleigh, where she soon displayed some talent in writing when the senior class magazine, The Muse , printed an article she had written when only ten. On 17 Jan. 1894 she married Lieutenant William Ewen Shipp, a graduate of West Point who had seen service against Geronimo while with the Tenth Cavalry; when they met, he was inspector of state troops in Raleigh. The Shipps soon moved to Winston, where he was commandant of cadets at the Davis Military School and where their two sons, William E., Jr., and Fabius B., were born.

At the outbreak of the Spanish-American War, Lieutenant Shipp's regiment embarked for Cuba. On 1 July 1898 he was killed at the Battle of San Juan Hill, where he was in charge of black troops. Of that day Colonel Theodore Roosevelt remarked, "It was Shipp who brought me word to advance with my regiment. . . . He had been riding to and fro with absolute coolness and fearlessness, paying no more heed of bullets than if they were hail stones."

To augment her limited military pension the young widow, with two small sons to raise, now turned her thoughts to writing for the national magazines, "a more difficult feat than to scale the walls of a fortified city," a friend observed. Nevertheless, by background she was not entirely unprepared to cope with the matter of expression. From a highly literate father she had inherited a remarkable memory and while still a child was given to rattling off quotations from Shakespeare; later she recited pages from Elizabeth Barrett Browning. Though something of an infant prodigy, she was described as having "refreshing naivete, remarkable precocity and quiet self confidence." Further, apparently prior to her husband's death she had had material accepted by the Charlotte Observer and possibly by other North Carolina periodicals. This local popularity depended upon emphasis on the local scene, vignettes of life in and of her native state, with a good ear for dialect, dialogue, and background.

Her first story to be accepted by a national magazine, Ainslee's, appeared in January 1899. By 1903 she was published in Collier's, Everybody's, and Munsey's and in 1910 by the prestigious Saturday Evening Post .

In 1923 Archibald Henderson, writing for The Southern Literary Magazine, stated, "Today I dare say, Margaret Busbee Shipp is the most admired, the best loved woman in North Carolina. This enviable distinction is regarded by those who know her well as the most natural thing in the world. She has always appeared to be the incarnation of romance . . . I will say she writes most diverting love stories, full of whimsicality, sentiment, and feminine contrariety; [and] charming stories of children straight from life."

Her works appeared in numerous magazines. Titles of her stories with exact dates of the magazines can be found in a typed bibliography in the North Carolina Collection, University of North Carolina at Chapel Hill. Although most of the periodicals to which she contributed published several of her works, Munsey's, a popular family magazine, printed at least thirty-six between 1903 and 1926, the date the bibliography was prepared. Others for which she wrote were American, Blue Book, Century, Cosmopolitan, Designer, Green Book, Maclean's of Canada, National, Pearson's, Red Book, Rotarian, Smith's, The Smart Set, Southern Review, Watson's, Woman's Home Companion, and Youth's Companion.

Margaret Shipp died in Rome at age sixty-five and was buried next to her husband at St. Luke's Episcopal Church cemetery in Lincolnton. She was survived by her oldest son, William E. Neither son left issue.

Adelaide L. Fries and others, Forsyth: The History of a County on the March (1976)